Known as the Queen of Soul, Aretha Franklin died on August 16th at 9:50 a.m. at her home in Detroit surrounded by family and friends. She was 76. According to a family statement, the “official cause of death was due to advanced pancreatic cancer of the neuroendocrine type, which was confirmed by Franklin’s oncologist, Dr. Philip Phillips of Karmanos Cancer Institute in Detroit.”

Aretha started singing gospel music as a child at New Bethel Baptist Church in Detroit, where her father, C. L. Franklin, was the minister. In 1960, at the age of 18, she began recording for Columbia Records but didn’t get the breakthrough she needed as an artist. After signing to Atlantic Records in 1967, Franklin achieved major success with some of her most famous songs such as “Respect”, “(You Make Me Feel Like) A Natural Woman”, “Spanish Harlem” and “Think”.

Fans of Franklin left flowers and a crown on her Hollywood Walk of Fame star in Los Angeles to honor her memory, and former President Barack Obama tweeted “Aretha helped define the American experience. In her voice, we could feel our history, all of it and in every shade — our power and our pain, our darkness and our light, our quest for redemption and our hard-won respect. May the Queen of Soul rest in eternal peace.”

She will certainly be missed, but her powerful, soulful music will live on forever. To honor her life, we have gathered some important thoughts and positive quotes from the Queen of Soul that will change your life.

Here are 7 thoughts about life from Aretha Franklin:

1. “We all require and want respect, man or woman, black or white. It’s our basic human right.”

One of her most iconic songs “Respect” earned her two Grammy Awards in 1968 and was one of the most influential songs for the feminist movement. Aretha Franklin‘s version of this song made Rolling Stone’s list of “The 500 Greatest Songs of all Time,” coming in at number five. Not only did “Respect” become an anthem for the Women’s Rights movement, it also was an important song for the Civil Rights movement. The song’s message was loud and clear: you have to demand respect from people, because otherwise they’ll just walk all over you. If someone doesn’t respect you, then just turn the other way, because you deserve better.

2. “You cannot define a person on just one thing. You can’t just forget all these wonderful and good things that a person has done because one thing didn’t come off the way you thought it should come off.”

Acceptance of others played an important role in her music as well, and this quote sums that up perfectly. We can’t simply judge others on their mistakes, because who doesn’t mess up at some point in life? We should remember others mostly for all the good things they’ve done, because most people in the world are good souls who are trying to figure things out just like the rest of us. Positive thinking helps to reframe life and keep us focused on the good intentions of those around us.

Aretha Franklin knew that God didn’t give her the ability to sing just for the fame, money, or other material gains. She used her voice to deliver the importance of social justice, and always answered the call to raise money and write checks for the Civil Rights movement. Her music truly unified people because it transcended race, social status, and religion; it was about human equality.

4. “Music does a lot of things for a lot of people. It’s transporting, for sure. It can take you right back, it’s uplifting, it’s encouraging, it’s strengthening.”

Aretha Franklin’s music was certainly all of those things. She captivated crowds with her powerful voice and important messages throughout her music. In her career, she won 18 Grammy Awards and sold over 75 million records worldwide.

5. “Sometimes, what you’re looking for is already there.”

This quote can remind us that maybe what we’ve been searching for is right in front of our eyes already. We often become blinded by what society wants us to do, think, or say and instead of listening to our own soul, we give into popular opinion. However, maybe what we really need is within us already if we search hard enough. Aretha Franklin never looked outside herself for the answers, because she knew that her natural talents would change people’s lives. Though she had plenty of people guiding her along her musical journey, Aretha found most of her inspiration within.

6. “Who hasn’t had a weight issue? If not the body, certainly the big head!”

Aretha struggled with her weight for years and suffered from health problems in her later life. However, she didn’t let her health stop her from delivering music to thousands of people, and despite the fame, she always remained humble. 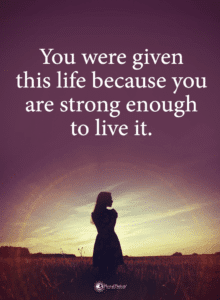