Most people are aware of the tragic outcomes of dementia, including Alzheimer’s, but most do not know that depression is one of the most common preclinical signs of the disease. Researchers from Brigham and Women’s Hospital in Boston, Massachusetts now say that a rise in anxiety symptoms may be an early sign of Alzheimer’s.

“Anxiety disorders are common across the United States, thought to affect around 40 million adults each year … as if these feelings of worry and fear aren’t enough to contend with, a new study suggests that older people who have worsening anxiety symptoms may be more likely to develop Alzheimer’s disease”, says Medical News Today.

The Degenerative Process of Dementia and Alzheimer’s

Cognitive impairments associated with dementia, otherwise known as the degenerative process, begin between 10 to 20 years before dementia symptoms surface.

As a reminder, here are the 10 early onset symptoms of dementia, including Alzheimer’s:

Here’s what the research says about the possible connection between Alzheimer’s and anxiety:

For a long time, researchers have been looking into psychiatric conditions that increase the risk of developing Alzheimer’s. Surprisingly, while studies have linked depression to increased risk of Alzheimer’s, relatively little research has been done for its symptoms.

“Rather than just looking at depression as a (whole), we looked at specific symptoms such as anxiety. When compared to other symptoms of depression such as sadness or loss of interest, anxiety symptoms increased over time in those with higher amyloid beta levels in the brain.” 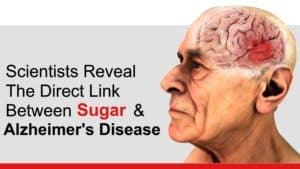 Amyloid beta, commonly referred to as beta-amyloid, is a protein found in the fatty membrane surrounding nerve cells. A “sticky” chemical substance, beta-amyloid tends to build up into a plaque progressively. Neurologically, it is thought that beta-amyloid obstructs nerve cell (neuron) firing, leading to the decline of cognitive functions.

According to Donovan and her colleagues, Alzheimer’s patients with higher than average beta-amyloid levels tend to experience an increase in anxiety symptoms.

Donovan’s study involves 270 healthy senior citizens between the ages of 62 and 90 years old. Throughout the five-year period, participants would routinely undergo positron emission tomography (PET) scans. PET scans are useful in determining the levels of substances within areas of the brain, including beta-amyloid.

In addition to the PET scans, each participant completed an annual mental health assessment. Researchers were looking for each subject’s self-rating across three primary depressive symptoms using a 30-item depression scale: anxiety, apathy-anhedonia (extremely low levels of motivation), and dysphoria (unease or dissatisfaction with life.)

The researchers discovered that participants with an increase in anxiety symptoms also tested for higher levels of beta-amyloid levels. The effect was not nearly as significant for other depressive symptoms.

In short, this new research shows that worsening anxiety symptoms can be an indicator of Alzheimer’s disease prior to the surfacing of cognitive impairment.

“If further research substantiates anxiety as an early indicator, it would be important for not only identifying people early on with the disease, but also, treating it and potentially slowing or preventing the disease process early on.” ~ Dr. Donovan

Currently, there is no cure for Alzheimer’s disease (or other types of dementia.) While more research must be done, Dr. Donovan believes that her study may eventually contribute to a cure. Many neurologists think that a cure for Alzheimer’s is within reach – with a possible breakthrough likely within the next five years.

However, prevention is always the best medicine, particularly for brain disorders such as dementia. Now, patients, physicians and caretakers possess convincing evidence that anxiety and depression are a frequent precursor to this devastating illness.

Increasing anxiety and depression levels – particularly among the elderly – should warrant serious caution. As mentioned, it is almost certain that depression is a catalyst for dementia. It is safe to assume that future studies will replicate Donovan’s – adding anxiety disorders and anxiety symptoms to this list as well.