Bullying is an extremely troubling and heartbreaking issue. The psychological damage of bullying often sticks with an child well into adulthood – as is typical of traumatic events.

According to a study published in the Journal of the American Medical Association, substantial evidence exists demonstrating the increased risk of depression in kids who were bullied. During childhood, victims of bullying often display depressive symptoms, poor academic performance, and low self-esteem.

Many of the psychological effects of bullying – particularly anxiety and depression – are often evident among adults who faced constant physical and/or verbal harassment as children. (Children who both instigated and were the recipient of bullying may suffer even worse mental health problems.)

This article discusses seven potential adult behaviors of someone made fun of as a child. To wrap things up, we’ll briefly talk about some treatment options available for those suffering.

Here are 7 adult behaviors of someone who was bullied as a child:

“Being bullied frequently by other children is a traumatic experience, and researchers need to gain a better understanding of how important a child’s early peer and school experiences are for their development.” ~ Cari Nierenberg: “Childhood Bullying Can Have Lasting Effects On Mental Health.”

Anxiety that is both constant and intense is perhaps the most common symptom of childhood bullying. Adults bullied as kids are often diagnosed with social anxiety disorder, or SAD. SAD is the third-most-common mental health condition in the world – and it is often debilitating.

Individuals with SAD or a similar condition are aware that the anxiety is not rational. For example, they innately understand that people are not always watching and judging them – but this knowledge does next to nothing to relieve the symptoms.

Kids who faced bullying often have to overcome years of negative subconscious programming that bullying leaves behind. The natural human tendency when one faces rejection or peer adversity is to withdraw and isolate themselves.

Why? Because through isolation from others may be hurtful, it is less so than exposing themselves to rejection or worse. 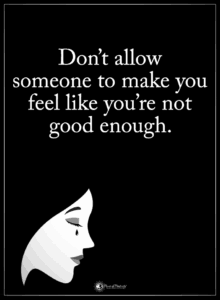 Per a research study from Kings College in London, England, victims of bullying are more likely to suffer from depression for up to 40 years. Individuals who were “frequently” bullied, according to the study, are nearly twice as likely to develop the condition.

The most common symptoms of depression include irritability, fatigue, restlessness, feelings of guilt, worthlessness, and helplessness, pessimism and hopelessness, and loss of interest in previously-enjoyable activities.

Health experts know that psychological problems can manifest into physical. For example, individuals diagnosed with anxiety and depression have an increased risk for both heart disease and substance abuse. The elevation of the stress hormones, cortisol, and adrenaline may be the catalyst for many of these physical effects.

One of the most heart-wrenching aspects of bullying is the effect that it has on intelligent, capable kids. Unfortunately, these are the same kids that are often targets of bullying. While some resilient kids manage to overcome these difficulties and still succeed in the classroom, many do not.

The mental health conditions mentioned in this article alter the brain’s natural chemistry. This fluctuation in brain chemicals – especially when serotonin is involved – makes mental processes like concentration and memorization much more difficult. Underachievement in kids made fun of often begins in the classroom and continues into adulthood.

Emotional intelligence refers to “the capacity to be aware of, control, and express one’s emotions, and to handle interpersonal relationships judiciously and empathetically.” It’s easy to understand why someone who was marginalized as a child may not be able to pick up on or understand emotional cues – even their own.

Childhood bullying almost always leads to emotional underdevelopment. The reason is that bullied children do not experience the social interactions required to mature in a social sense. This stunting of emotional intelligence often lasts well into adulthood.

In a joint study conducted by researchers from Duke University and Warwick University (UK), scientists conclude that victims of child hood bullying are more at-risk for adopting antisocial behaviors. The 1,400-person study, which tracked people from the ages of nine to 26, found that those who identified as “bully-victims” were also more likely to have been convicted of a criminal offense.

“We cannot continue to dismiss bullying as a harmless, almost inevitable, part of growing up,” says Professor Dieter Wolke of the University of Warwick, “We need to change this mindset and acknowledge this as a serious problem for both the individual and the country as a whole; the effects are long-lasting and significant.”

A practice called mindfulness-based stress reduction, or MBSR, has proven useful on military personnel suffering from post-traumatic stress disorder (PTSD). It stands to reason, then, that mindfulness and meditation practices may help alleviate some of the psychological and physical effects of bullying.