Is your relationship not going the way you had planned for it to be? Perhaps you imagined something else – but what you’re experiencing doesn’t seem to be in line with those expectations. As psychoanalyst, Dr. Deborah Hecker points out “It is common sense to say that we enter relationships expecting them to be emotionally supportive, mutually enhancing and full of good communication. Unfortunately, sometimes we feel worse after spending time with our significant other.”

Here Are 8 Signs You’re Settling In A Destructive Relationship

1. Others have it worse

In order to let go, recognize that there doesn’t need to be a hierarchy of pain that you’re supposed to endure before you’re allowed to leave a bad situation. Give yourself the advice that you would give your best friend: if it hurts, it’s okay to leave.

2. You think you can work it out

Have you tried working it out before? If so, you may find that “working it out” doesn’t always work, leaving you more frustrated than before. Take a long, hard look at your relationship and the issues that never seem to be resolved. Accepting that some things can’t be worked out is a step to letting go of a destructive relationship.

3. You’re waiting for your partner to change

People go through many stages in their lives. Some people change from selfish individuals, to entirely giving people. The problem arises when you’re sitting there and just waiting for your partner to make that change. If your partner doesn’t want to make actual, concrete steps into changing their behavior for the sake of themselves and your relationship, then there’s no point waiting around – if you’re waiting, you’re settling.

Ask yourself: would you tell someone you love to wait to see if their partner to change, if the situation was causing them distress? If the answer is no, then there’s no need to convince yourself to wait for a change that may never come. In order to let go, accept that trying to change another person can be as difficult as trying to change the direction of the tides – all you can do is go with the flow. And sometimes, that flow takes you and your partner in two different directions.

4. You’re “dealing” with the relationship

Again, think of yourself as your best friend. Letting go of a destructive relationship can be difficult, but giving yourself the advice you would give to someone you love and care about can make it easier. 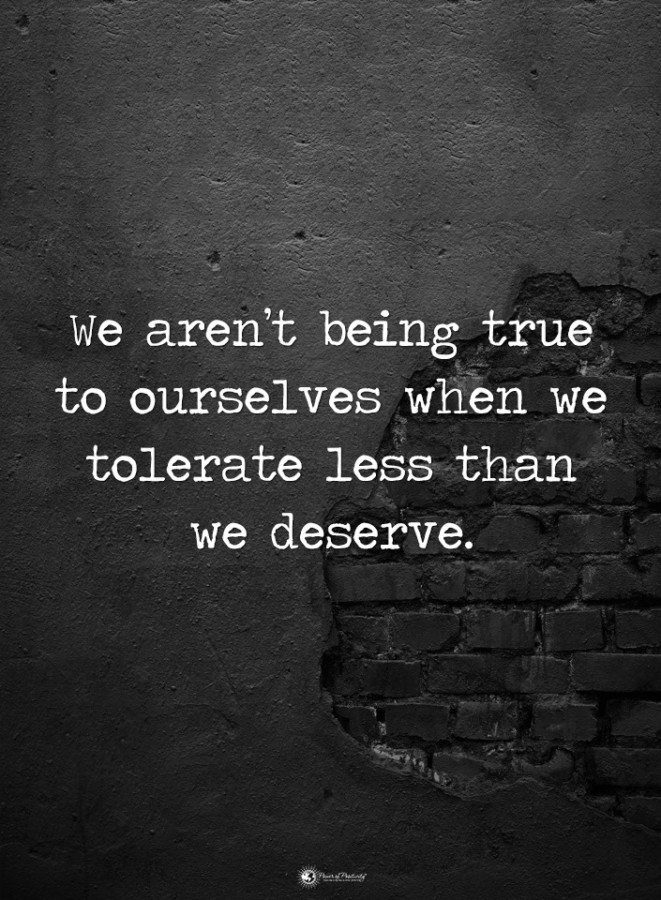 Perhaps you’ve been with your partner for long enough that leaving would seem cruel – even if you’re unhappy. You feel sad for your partner, knowing that if you left they would have no one. Or, perhaps you feel guilty for thinking about leaving at all. If you’re unhappy, there’s no way that you can continue making your partner happy. A relationship where one person has settled isn’t good for either partner.

Would you want someone to stay with you out of guilt? The answer is most likely going to be a resounding “no”. Letting go of guilt can be one of the hardest things we have to endure. Getting support from friends, family and even a counselor can help work through the guilt, and make letting go of both it and the destructive relationship a lot easier.

Many of us endure bad, unsatisfactory or destructive relationships simply out of fear of being alone. If you find yourself thinking that you would leave, if only you didn’t have to be alone … then that’s a sign that your relationship isn’t what you need it to be.

Recent research conducted by Stephanie S. Spielman mentions, “… present research suggests that fear of being single is a meaningful predictor of settling for less in relationships.”

Fear of loneliness shouldn’t be the driving factor of keeping you in a relationship where you’re not being fulfilled. You may find that being alone and happy will make you feel better than being with someone, but in a constant state of stress and unhappiness.

Surrounding yourself with a support system of friends and family can give you a better perspective on whether or not your relationship is making you happy. They can also make letting go of the relationship easier, because you’ll know that you’re not going at it alone.

7. You’re staying because of the children

Getting married young, or too soon, or because someone got the other person pregnant, can often result in marriages that are unstable, destructive, and one or both partners are unhappy. If you find yourself staying out of commitment for the children, this is a sign that you’re settling into a relationship you don’t really want to be in.

Chances are that the children can already see what you’re still pretending isn’t there. Also remember what Steven Stosny, Ph.D., says, “Witnessing a parent victimized is often more psychologically damaging to children than injuries from direct child abuse.”

Trying to stay and make it work for the children is an honorable feat – but it isn’t always the right direction. Making sure that your children are raised in the safest, healthiest environment possible should be your main concern. Letting go may involve some deep reflection on whether or not the relationship is what’s best for the children involved.

8. You’re financially dependent on your partner

Relationships are all about compromise and balance. There are plenty of households that run smoothly with having one sole provider and another taking care of house and home. But this runs the risk of trapping someone into a relationship they no longer want to be in.

Ian Williams, Spokesman for Debt Advisory Centre says, ” It’s shocking to hear that so many people feel forced to stay in a relationship for longer than they want to because of their finances, but it’s perhaps not that surprising. It’s tough to end the bonds we create in a relationship, and financial ties can often be the hardest to break.”

Therefore, if you’re staying simply out of lack of financial security, it’s important to seek outside help from a support network or financial advisor.

When we settle in unhappy or destructive relationships, we often don’t notice until it’s far too late. People settle in relationships that they shouldn’t be in for all kinds of reasons: for financial security, for children, or because they’re lonely. Understanding the signs of when you’re settling into a destructive relationship will help you navigate how to handle and deal with the relationship from then on out. But remember these wise words from Dr. Hecker, “No matter how much you think you can change your partner for the better, you simply cannot.