By Power of PositivityPublished on September 26, 2018Last modified September 28, 2021

When we get right down to it, there are three types of people in the world: those that love drama, those that hate drama, and those that are indifferent to drama. The first group is more prone to the extreme display of emotion; exhibitions of embellished behavior commonly seen in soap operas and other attention-seeking TV programs (we bet you can come up with at least three.)

In other words, they’re melodramatic.

We commonly refer to individuals who display such theater as “drama queens.” Kim Kardashian, Miley Cyrus, and Lindsey Lohan are three recognizable modern day examples of a drama queen.

“I was always a drama queen. I remember playing in the kitchen, trying to get my mom to think I was dead and call the police. When she didn’t, I would cry. I was always theatrical. I don’t think any of my relatives are surprised.” – Amy Lee, lead vocalist of Evanescence

Now, this is not to say that people with an appreciation for the melodramatic are themselves drama queens. We surely don’t want to encapsulate people in such a manner. Distinguishing the drama queen from other (even similar) people is a set of common mannerisms.

Here, we list eight such behaviors and provide a little info about each one.

Here are eight signs you’re dealing with a drama queen:

One of the more visible signs, drama queens both need and love to be the COA – the Center of Attention. They’ll conspicuously show off any new clothing or accessory to anyone who’ll listen. Conversationally, they’ll redirect the topic to themselves by initiating gossip or prompting someone to inquire into about them (e.g. by pouting, looking sad, etc.). In other words, drama queens will do and say nearly anything to be COA.

Erratic, inexplicable and immature outbursts are not proper behavior for anyone beyond the age of ten – and that’s pushing it. The drama queen takes the adage “Age is just another number” to a hemispheric level by continuing their immature ways for years; sometimes throughout their life.

Throwing tantrums is simply another method for a drama queen to be COA. Despite their age, drama queens continue to believe the irrational notion that the world revolves around them. When they don’t receive the attention they “deserve,” they are often quick to make a scene to get it.

Things happen in life that set us back – it’s a fact of human existence. Rational people will inquire thoughtfully to such setbacks and respond appropriately. However, drama queens – for the most part – are not the most rational people. As such, they’ll forgo any logical response and immediately assume that the worst happened.

Running late? They’ll assume you don’t care. Need to delay that rendezvous because of work? They’ll believe you’re blowing them off. So on…and so on…

4. Reacting emotionally to everything

Reason does not dictate a drama queen’s thought and behavioral processes. Instead, they’ll immediately respond in a childish manner to anything that they don’t like.

If the drama queen is your boyfriend or girlfriend, they seem almost unable to engage in a rational conversation. Why? Because anything that stokes their emotions almost assuredly manifests into exhibitions of impulsive, irrational behavior.

5. Is attracted to and initiates conflict

When feeling bored, it is common for drama queens to “stir things up” by creating…you guessed it…more drama. The purpose is simple – to ignite emotions and get people into a reactive state. This is the perfect recipe for conflict.

6. Drags out conflict as long as possible

Relatedly, when conflict does surface, a drama queen wants the conflict to stick around as long as possible. To them, it’s an emotional high. Even when everyone else seems ready to separate themselves from the situation, the drama queen will try to bring them back in through their typical, irrational antics.

This type of behavior does pose a threat, specially if it takes place in front of those close to you, such as friends or family. In this scenario, whether we realize it or not, our drama queen may be attempting to separate you and yours. 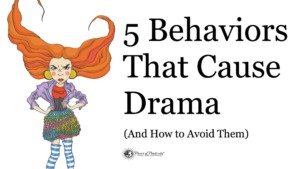 No matter the venue, a drama queen loves to make her presence known in the most dramatic way possible. This often involves showing up a bit late (how ironic) so that all eyes are on them. The drama queen basks in this attention, whether it be good or bad.

8. “Falls ill” at the most inconvenient times

This is very common when in a relationship with a drama queen. Your significant other will suddenly fall ill immediately prior to you meeting up with some friends, or perhaps trying to get in some (well-deserved!) alone time. They’ll make the utmost attempt to alter your state of mind – one from happiness and contentment to guilt and unworthiness.

Of course, the entire charade is intended to ensure that they remain your number one priority.