We are in a new era of relationships. Technology makes it easy for us to be in a constant state of communication. But, even though times have advanced, relationships are still old-school. It’s difficult to know what is acceptable and what is not. The golden rule is to follow your gut. You know when something is not right, when something just doesn’t sit well, and when you feel that you might be taken for a ride on an emotional roller coaster. True relationships, the ones that last, don’t play games. They are comfortable. If you are feeling like something is “off,” perhaps you need to address it and be honest with you and your partner.

Here are 6 behaviors that show it’s time to end a relationship:

When we start new relationships, we give the best of ourselves. Favors are done automatically. We go above and beyond what is expected. In loving another, we make promises to always be available for each other. We make vows of respect, commitment, compromises, and integrity. But, what happens when those foundation blocks that once held us up, start to fall apart? What happens when we get comfortable with each other and we no longer work as hard to keep the relationship afloat? These are the broken promises we take for granted.

It’s not just in marriages. It happens in a new relationship. We begin to feel as if we give more than what we receive. Relationships aren’t about keeping a tally of what is given and what is received. However, when that person starts to act differently, no longer doing the same things as before, things need to be addressed. It’s not just about breaking promises of love and fidelity. It’s about being available through the good and bad times.

In the beginning, you blew up each others’ phone with text messages. You would be on social media declaring your love to each other, but as time passes, those messages started disappearing. You are lucky to get one text during the day. And, it’s not because you are too busy, because let’s face it, when you are attracted to someone, you make time for them. As per WebMD “All relationship problems stem from poor communication, according to Elaine Fantle Shimberg, author of Blending Families. ‘You can’t communicate while you’re checking your BlackBerry, watching TV, or flipping through the sports section,’ she says.”

Communication requires work. It’s the willingness to make time to feel the awareness of each other. 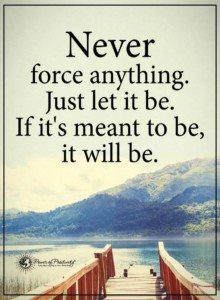 What happened to the sex? The stress of finances, jobs, and family can hit the libido in a big way. However, when two people are attracted to each other, intimacy doesn’t fade completely. It might decrease, but not become non-existent. In 1979, American psychologist Dorothy Tennov came up with a new word, limerence. It is defined as the period in relationships known as the falling in love and the lust stage. This is driven by the neurotransmitter phenylethylamine (PEA), which is combined with dopamine and norepinephrine.

These hormones are responsible for the positive and desirable feelings we get when we are attracted to someone. They are the so-called chemicals that create euphoria and increased energy and dictate our sexual desires. Limerence feels amazing but, as per this psychologist and her research, unfortunately it has a shelf life lasting from about six months to three years. And, after that, it’s a slow decline. So, when the expiration life of sex is over, it’s time to figure out how to bring it back. Intimacy may decrease, but it should not be allowed to disappear completely. It’s up to you to decide if it’s worth saving. Is there more to the lack of sex than just being tired?

4. Neither of you are the same people as before.

We evolve as humans. We grow in all aspects of our lives, especially in relationships. You might have been one way when you began your relationship due to having been hurt in the past, or just life changes. The relationship might have begun as a rebound one, or you happened to meet when you first moved to a new place. You might have met at work. As time would have it, you have grown in different directions.

You might have been in college when you met and, now graduating, you don’t know what may happen. Experiences push us to find those partners that compliment our journey at one specific moment. When things start to change, we change, and therefore, the relationship starts to suffer. You’ve outgrown one another. And, the best thing to do is be fair with each other by acting mature enough to call it quits.

5. Hearing is one thing, but listening has disappeared.

Remember when you began your relationship and the two of you could talk for hours? You shared your stories, your dreams, and you believed no one could ever take away that amazing feeling of being heard. Now, you’ve hit a plateau that in order to actually be heard, you have to fight for it. If you have to get into an argument to state a point, or be understood, you need to take a hard look at your relationship status. If talking has become a matter of setting up a scheduled time, perhaps you realize it isn’t that important to be in that type of commitment. We have to make appointments for medical issues, car problems, and other matters, but to be acknowledged in a relationship shouldn’t be one of them. How much time and energy do you need to put into being heard?

6. You both make time for other things.

If you find yourself spending more time away from your relationship, or your significant other has more time for others than you, recognize there is a problem. If you can’t remember why you ever wanted to be with him or her, perhaps it’s time to step back and be honest. You might be wasting each others’ time by pretending to be in a relationship. Healthy relationships have the freedom to come and go, spend time with friends, have separate hobbies, etc. But, if you are constantly making excuses to be away from each other, it’s time to end that relationship. Your mate should be one of the most important people in your life. No compromising there!

Ending a relationship isn’t always a catastrophic event. Sometimes, it’s about allowing for the right time and the right person to come into your story.

“Ends are not bad things, they just mean that something else is about to begin. And there are many things that don’t really end, anyway, they just begin again in a new way. Ends are not bad and many ends aren’t really an ending; some things are never-ending.” ~ C.JoyBell C.