But there is no magic formula for a successful, positive and lasting relationship. There are also no secrets to what makes a relationship stronger. People have goals for the kind of relationship they want. But here are some definitive characteristics of what a relationship should never be.

Here Are 5 Things A Relationship Should Never Be

“A great relationship is about two things; first, find out the similarities; second, respect the differences.” – Unknown

No relationship is worth sticking for if it’s abusive. According to the Center for Relationship Abuse Awareness, this can take many forms like physical violence, sexual violence, emotional torture, financial abuse, intimidation, isolation, and threats.

The abuse may start small but it will get worse and worse over time as the relationship deepens. Someone who is abusive will show a pattern of behavior that has to do with gaining control over the other person.

The victim of an abusive relationship may sometimes see the partner’s anger, possessiveness, and violence as an expression of love. So, this person will try to change his or her own behavior in the hopes that their partner will stop the abuse. But someone who truly loves you will never hurt you physically or emotionally. Being abusive is actually a choice for the abuser and so the only person who can stop the abuse is the abuser, not the victim.

Some signs that your partner may be abusive include the following actions and behaviors:

Too often, you see individuals staying with their partner despite verbal and emotional abuse. There are too many layers in this situation to ever make sense to someone who’s not personally involved with the abuser.

Some victims of abuse can’t easily leave the relationship due to fear and isolation, expectations from other family members, a damaged sense of self-worth, or even practical and financial limitations. Abuse victims also hesitate to open up because of the stigma and judgment from society.

2.    It should not be for convenience

Some people stay in a relationship out of convenience. They stick with their partner because they think this is the best option for them instead of breaking up and starting over with a new person.

But a relationship of convenience, no matter how practical or comfortable it is, is not built on a solid foundation. If there is no love and compatibility in this relationship, any positive feelings you might have for your partner can fade and disappear.

You can’t be committed to a relationship that exists out of convenience. Your priorities will change with the needs that define what’s convenient for you. But a truly loving and committed relationship can transcend these changes.

To be clear, however, settling with someone is different from accepting the other person’s flaws and imperfections. You’re not in a relationship of convenience if, despite your partner’s shortcomings, you still enjoy his presence and appreciate his positive traits more than anything else.

You’ll start the relationship in the wrong place if it’s actually an affair. If your partner is still legally committed to someone else and he’s cheating with you, your relationship will likely end up badly.

Psychiatrist Dr. Frank Pittman, in the book “Private Lies: Infidelity and the Betrayal of Intimacy”  said most relationships that start out as affairs can fail because the foundation was never a healthy one. Paradoxically, a union that feeds on the secret excitement and “sacrifices” that the ones involved make may give the illusion that this affair is worth it. But when things come to blow, there will be nothing for the relationship to feed on. For this reason, most affairs tend to eventually end.

The cornerstone for all relationships, regardless of their nature, is trust.

Experts say that, in most cases, couples who met because of an affair will find it harder to trust each other even if they attempt to make their union work. Statistically, men who have affairs end up settling down faster with their affair partner after going through a divorce. But because the nature of this new relationship did not start out right, it won’t turn out well since they never got to know their new partner properly.

You’ll also be party to the guilt and the lies if you become the other woman. The only person who benefits from this relationship is the guy who receives the ego-feeding. This situation might only lead to bigger disappointments and heartbreaks for you, especially if you’re expecting more because you were promised that things would change.

Meanwhile, if you’re the one who has been cheated on then you also have to reconsider the point of staying in the relationship. If you decide to take your partner back, despite infidelity, you need to understand that it will be a very different relationship this time around. Forgiving is necessary but you also have to be sure of your decision. Some relationships have indeed come out more positive after an affair but it took a lot of hard work and commitment for this to survive.

An enabling partner often tries to be a positive influence. In its truest sense, this means showing your love and support for your partner especially in times of problems and challenges.

However, enabling behavior can be bad for a relationship that’s marred with substance abuse addiction, serious financial problems, and co-dependency. It starts off as a good intention but if one partner repeatedly “helps” the other without addressing the real issues like drinking, gambling, debts or drug addiction, then this relationship will bring more harm than good.

Some examples of enabling behaviors in a relationship are: 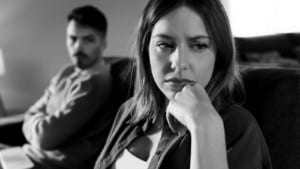 The enabler in the relationship will usually have her guard up as well because she believes this is how she must defend and support her partner. But this is, in fact, how an enabling relationship becomes a co-dependent relationship. When the focus of the union is mostly about the addict and the substance abuse, then it’s not going to be healthy.