Many of us make losing weight more difficult by (a) not having a plan, and (b) not understanding the science of weight loss. Concerning the latter, scientists, dietitians, nutritionists, and other “experts” haven’t exactly done us any favors (how many times have we been told that eggs are “good … wait, we mean bad … no, we mean good … for you”?

Though this may sound ridiculous: losing weight isn’t that complicated – if you understand the basics of food science and human physiology. Which brings us to the topic of today’s article: 5 simple ways to get thin.

There’s a reason the writer has chosen the word “simple,” and not “easy.” You see, the proven catalysts of weight loss that have stood the tests of time are very plain and straightforward. But no matter how simple a concept, no good comes of it when the execution is poor.

So do yourself a favor and stick to the plan. Besides seeing the results of your efforts much sooner, you’ll have less trouble keeping the weight off!

On that note, here are 5 simple ways to get thin!

1. Limit the starches and sugars

While going “no-carb” or even “low-carb” isn’t altogether unnecessary for losing weight, cutting back on or eliminating starches and sugars (a.k.a., “bad carbs”) makes shedding pounds that much easier.

When you cut back on bad carbs, your body stops burning them for energy; instead, it starts using fat stores as its primary source. Limiting carbs also helps expel excess water from the body (water retention).

In a 2014 study published in the journal Obesity Reviews, researchers found that individuals on a “ketogenic low carbohydrate diet” reported feeling “less hungry” and a “reduced desire to eat.” Scientists attribute these stated effects to ketosis – the burning of stored fat instead of glucose.

While you don’t technically need exercise to lose weight, it sure helps. Not long ago, scientists were harping on about cardiovascular exercise (running, jogging, etc.). While cardio is most certainly healthy, strength training may just be a better weight loss option overall.

Strength training – most commonly performed by lifting weights – pulls double duty: burning fat to help you get thin and building muscle mass. If you insist on getting a bit of cardio in (like this writer does), a quick 5-minute HIIT session is all that you need.

Fat, protein, vegetables. Eat them. Often. Now, not just any source of fat or protein will do. Here’s a short list of some good food choices for each:

If you stick to the foods on this list, you’re almost guaranteed to lose a good amount of weight. (Especially with a bunch of water; see #5!). If, after eating three full meals you feel hungry later – a normal reaction when transitioning to a lower-carb diet), it’s A-OK to eat again! After a period of adjustment, your hunger levels should begin to decline.

On the last note, make sure that you keep plenty of healthy snacks on hand like nuts, seeds, celery sticks, peanut butter, etc.

It is estimated that drinking water throughout the day boosts metabolism between 10-30%. This one practice alone will help you along the road to getting thin. Researchers of the study, published in the Journal of Clinical Endocrinology and Metabolism, attribute the surprising results to thermogenesis produced through the normal activation of ion channels in excitable cells. 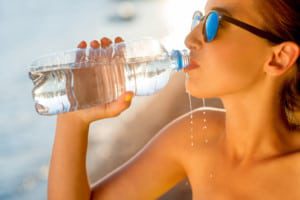 Ice cold water may increase this fat-burning effect, as the body is forced to burn additional energy to warm itself. Additionally, multiple studies show that people who prioritize drinking water over sugary beverages have better weight-loss outcomes that those who don’t. These individuals are also far more likely to keep their weight off, thus avoiding the dreaded “yo-yo dieting.”

Okay, so no one likes a good movie or T.V. show more than the person writing these words. But come on, people. According to the Nielson Total Audience Report, the average American watches nearly five hours of television per day. Yet we still complain that we have “no time” for exercise … uh-huh. (Surprisingly, the 18-34 year olds watch the least amount of television, at just over two hours.)

If feeling like a sloth isn’t enough of a reason to get off the couch, it turns that the T.V. may lead to a decline in cognitive abilities. Over the past quarter-century, researchers have found that people who watch more television have slower brain processing speed, worse verbal memory, and slower overall executive function. The executive area of the brain, the prefrontal cortex (PFC), is what helps us pay attention, organize information, and execute complex tasks.