I don’t know the first real thing about the dating game. I don’t know how to talk to a specific person and connect. I just think you have to go to person by person and do the best you can with people in general. – Jason Schwartzman

The very funny Jason Schwartzman is not the only man or woman to be confused about the “rules of relationships.” In general, relationships bring to the surface a whole host of different emotions: attraction, joy, novelty, fun…repellence, frustration, boredom, anxiety.

One underlying factor that contributes to the wide spectrum of emotions in a relationships is uncertainty. From the very first date, it is almost assured that one or both people will experience perplexing thoughts and emotions at some point.

There do exist certain “rules” that may help lessen the emotional turbulence experienced in a relationship. In addition to that, being knowledgeable about these “rules” will positively impact the overall dating experience.

Here are 5 rules every couple should live by:

1. Do not force intimacy

Us humans are intimate creatures; it is a necessary trait for procreation brought about by evolution. As such, it can be very tempting to transition into a physical relationship quicker than what is healthy. Intimacy can mean holding hands, caressing, kissing, and of course, sex.

Both men and women are guilty of breaking this important rule, and it can be a deal-breaker. The first couple of months, especially, are where both people need to tread carefully. The reason is simple: making a move too quickly can potentially undo any previous chemistry.

The act of intimacy should be the pinnacle of two people’s feelings for each other. While we cannot – and should not – give advice about knowing the “right time,” it is a good idea to think of the stages of intimacy as chronological, from holding hands to intercourse; based solely off the level of mutual chemistry.

The second “rule” on this list appropriately follows the first. Often times, only one’s instincts can serve as a guide for what to do next in your process as a couple. Furthermore, keen instincts can protect the emotions of each person involved.

If something appears to be “off” about the other person, it at least warrants further investigation. If this feeling should persist after a couple of months (maximum) it is best to simply cut ties and move on.

Do not fall into the trap of making excuses for a person that you’ve just met. Look at it this way, if your instincts are right, then you save time while limiting the potential damage done to the other person. If you’re wrong, there are plenty of people out there that won’t raise a red flag.

“Saucy” is absolutely right on. Especially with the phrase “to find out what each other is like,” and “as a prelude to being a (couple).” Really, dating is supposed to be fun. Getting to know another person is (usually!) an entertaining experience.

But some people jump the gun way to early and settle down with the first person whom they have any meaningful chemistry. Needless to say, this is often a poor decision – and one that will probably end up hurting both people in the end.

Choose the right person for you. 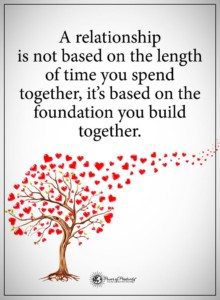 4. Do not be “overly available”

Not being “overly available” isn’t some sophomoric mind game that one plays with another – at least it shouldn’t be. Do some men and women manipulate their “availability” in some calculated attempt to attract the other person? Yes, but the true rationale for not being overly available is a far more benevolent and deliberate.

Simply put, managing your availability is about setting boundaries and safeguarding emotions.

During the “honeymoon phase” of a relationship, the thought of abdicating what you’re doing to meet up with the other person can be enticing. But it’s a certain mistake, and one that may inflict a heavy emotional toll should the relationship go south.

Instead, carry out your day as usual. Hopefully, you or the other person will know the right time to reach out.