You have mood swings because you’re a thinking and feeling human being. But if the changes in your moods start to interfere with your life, activities, and relationships then you might be suffering from an undiagnosed or untreated medical condition.

Some patterns of mood swing can be symptoms of an underlying disease. If you’re noticing the episodes becoming more frequent then it’s only prudent to see a doctor about it. Below are some potential reasons you’re having those mood swings, as explained by the experts.

Here Are 5 Reasons You Get Mood Swings, And How To Avoid Them

1.    You have not been basking in the sunshine

If you’ve been feeling depressed for days, then you’re likely not getting enough sunshine. Are you aware that the sun doesn’t just provide vitamin D? It is actually the most natural antidepressant and mood booster for your brain.

SAD is very common among people who live in climates affected by a long winter season, such as Alaska. When daylight is shorter and the temperature is so cold during this period, the residents in this part of the world would rather stay indoors or limit their activities outside.

The problem is, their serotonin levels drop because they are cooped up in their homes. As a result, they feel more depressed, more fatigued, and less energetic even if they are sleeping longer. Alaska has one of the highest suicide rates in the United States. Experts believe that part of the reason for this may be because of the lack of sunshine.

In Alaska, it’s common for homes to have a light therapy box, also known as phototherapy, to combat SAD, as recommended by doctors. You might also benefit from having this device if you’re still not motivated to go outside and enjoy the sunshine.

2.    You have a thyroid condition

You could be having mood swings because your thyroid is either overactive (hyperthyroidism) or underactive (hypothyroidism), according to doctors at the Mayo Clinic. You may have episodes of anxiety, depression, irritability, nervousness, restlessness, and severe fatigue depending on the condition of your thyroids.

Sometimes, the symptoms of depression may, in fact, be hypothyroidism. A blood test will help doctors determine if your mood swings are caused by a thyroid disorder. About 20 million people in the U.S. have some form of a thyroid condition. While it affects people of any age, statistics show that women are eight times more prone to have thyroid problems than men.

Treating a thyroid disorder is possible through medications or through radioactive iodine therapy. Surgery, however, might be needed for some cases to remove part of the thyroid glands.

To avoid developing a thyroid disorder in the first place, doctors suggest the following:

3.    You’re having a bad case of premenstrual syndrome (PMS)

A large number of women in their child-bearing years go through PMS every month. This phase brings a roller coaster of emotions. These may seem “too much” for other people but the mood swings aren’t something to knock off or disregard as insignificant.

At least eight percent of women also suffer from a more severe type of PMS called the premenstrual dysphoric disorder (PMDD), where they experience major symptoms of depression.

The great thing about mood swings due to PMS or PMDD is that it’s only temporary. A woman will feel more positive once her menstrual flow starts. Only, she has to go through the motions again the next month.

If you often go through a bad case of PMS when you’re in the middle of your menstrual cycle, you can do a few things to lessen the mood swings, such as:

4.    You may be developing diabetes

Diabetes mainly impacts how your body uses blood sugar for energy. However, this chronic condition may also have an effect on a person’s moods. 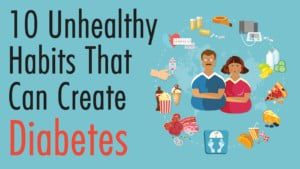 There’s also such a thing as diabetes distress that shares similar symptoms as a mental health disorder. Nearly half the people who have diabetes may experience this distress at some point, especially if they have not yet learned to manage their condition.

Doctors also say that diabetes and depression are interlinked. If you’re depressed, you raise your risk for developing diabetes because you may develop unhealthy coping skills like overeating or lack of physical activities. If you’ve been diagnosed with diabetes, you raise your risk of becoming depressed because managing this lifelong condition can be challenging and stressful.

If you’re often irritable and in a bad mood, perhaps you’ve been trying to tolerate some form of chronic pain. There are many conditions and diseases where a mood swing is an early indication of a developing disease.

Chronic pain is a long-term injury or a disease that limits your physical movements. It may be something as common as a lower back pain or arthritis, or a serious condition like multiple sclerosis or cancer.

Doctors say that mood swings are very common for people with chronic pain. They are always in a bad mood because their condition can be unbearable. However, the mood swings may also make the pain more intense, persistent, and debilitating. Therefore, some patients with chronic pain end up with depression.

Sometimes, patients with chronic pain may be advised to see a psychiatrist if their physical condition has become unmanageable. They may reach a point where they feel distressed about tolerating or treating the pain. In such cases, a mental health expert might help them find better coping skills and treatment strategies.

About one in five people in America are living with some type of chronic pain. You may reduce your risk if you know how to recognize the triggers that could worsen the condition. Among the biggest triggers of chronic pain are: