By Power of PositivityPublished on September 11, 2018Last modified September 16, 2018

While positive thinking can turn your life around for the better and totally change the way you look at things, it can easily backfire if you try too hard to think positive. This can make the whole process of retraining your brain seem daunting. What is more, it can lead to burnout and perfectionist tendencies.

You might find yourself overthinking, or simply comparing yourself to others who claim to think positively. Many spiritual “gurus” claim that negative thinking of any kind will “lower your vibration” or “cause an imbalance in your chakras.” However, remember that no human can reach perfection all the time and that those negative emotions actually make you human!

In short, only you can pave your own way to a more positive life, and there is no one right way to go about it. On your journey to positivity, make sure you don’t fall into these mental traps.

Here are some signs you’re trying too hard to think positive:

As you might already know, the mind can quickly become a hindrance to living a truly positive life. You want to think more positively so that you can live a better life, but at some point, focusing too much on your thoughts can become a whole other problem in itself. Especially in today’s world, many people have a brain that just won’t stop running. (And unfortunately, a lot of our thoughts tend to lean toward the negative side.) However, on the opposite spectrum, you don’t want to overthink your thoughts so much that you start to fight with yourself to remain positive.

To combat this, just let your thoughts come without judgement, and focus on “being” rather than “becoming.” Allow yourself to have negative emotions; just don’t attach yourself to them. You can slip into this state of being at any moment, soaking up experiences in your life without having to react to every little emotion.

You might feel that you aren’t doing enough to achieve a positive life, so in order to think positively, you begin to incorporate every new-age idea in existence into your daily life. This will only overwhelm you and will probably backfire because you’ll put the focus outside yourself instead of inside. You’ll begin to view objects such as crystals or tarot cards as a crutch instead of utilizing the power inside yourself already to think positively.

While you should have a daily practice in place in order to ground yourself, such as meditation or yoga, you shouldn’t place so much emphasis on “doing” things to make yourself think positively. No amount of healing crystals, Reiki sessions, past life regressions, essential oils, or spiritual “gurus” can replace the sheer power you have within yourself to change your mindset. Understand that you can transform your thoughts and your life with willpower and daily practice, and that anything outside yourself will only distract you from your goal. 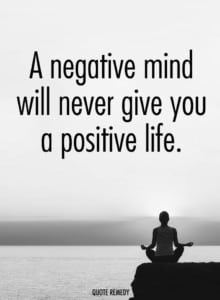 3. You compare your journey to positivity to others’ journeys.

Just like people compare themselves to their peers when it comes to material items, you might find yourself comparing your mindset and demeanor to others’ state of being. It might sound silly, but it happens all the time. People compare themselves so much to other people instead of just being themselves, because it takes courage to step into your truth. It takes bravery to stand on your own and emit your own frequency instead of feeding off the energy of other people.

So, remember that comparing yourself to someone else who might think more positively than you will only lead to frustration and sadness. Some people will be at a different place in their journey, but that doesn’t make them better than you. Everyone must walk their own path in life, so focus on your own road, not anyone else’s. Following someone else’s path will only lengthen the time it takes for you to reach your personal destination, anyway.

You are neither superior nor inferior to anyone else; you are equal, and you don’t need to become stuck in comparing when you can shine on your own.