As you might know from your own fitness journey, it takes a lot of work to get abs (for most people). Just doing a few crunches or doing exercise a couple days a week won’t cut it if you want a sculpted tummy. One 25-year-old mom took things to the next level to get abs in just two weeks! Read more about Iulia Danilova’s tips and tricks below. She posted before and after photos two weeks apart so you can follow her health journey.

As you can see from her before picture, she started out with a pretty high level of fitness already, but her transformation shows that we can always improve and keep striving for more. She simply cut down on carbs and did cardio to lose a little extra belly fat.

Danilova’s normal workout routine before her “cut” included lifting weights for 45 minutes to an hour up to six mornings a week, making sure to rotate between body parts throughout the week. She didn’t do cardio but tracked her macros closely, eating things such as rice, pasta and potatoes, plenty of protein from red meat, eggs, and chicken, and ample fats from healthy sources like avocado and olive oil. To gain muscle definition in her abs and increase her health, she made sure to eat around 15% more calories than her body needed.

During the two weeks between photos, she added four cardio sessions to her weekly routine to get sculpted abs. She’d either hike or spend 40 minutes on cardio machines at the gym such as the Stairmaster, bike, or treadmill.

However, don’t think that just because she lost belly fat, she had to starve herself to do so. She openly admits that crash diets don’t work; they only leave you feeling lethargic and lead to binges later on. She simply ate about 10% less than her body needed, increasing her protein intake while cutting back on carbs that can lead to water retention and bloating. She ate all the same foods as she did before, just less or more of them. 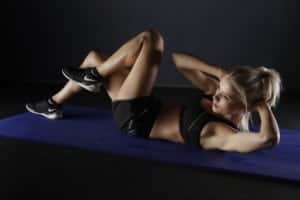