Smart people know that language matters. They understand that what they say reveals their beliefs and thoughts.

This is why those who are intelligent, mature, confident, and reliable speak with care. They make sure their words are appropriate for the time and they choose to speak transparently. It’s a great way to inspire others to believe in them!

If you want others to think you are intelligent, start with the way you speak. Here are some phrases smart people never say.

According to this study, there are 9 kinds of intelligence. IQ tests examine only one particular kind, and they usually favor people who are good at solving puzzles and problems. They aren’t magic tests that locate smart people.

When you’re talented at doing something, you deserve to feel good about it. But saying that you have a high IQ and citing it as a reason you’re right is arrogant and, frankly, not very smart of you.

Just because something has been done a certain way doesn’t mean it’s the best way. This is even more important to note because of the advancement of technology. Methods and processes are constantly getting revamped. To resist is often to stand in the way of something becoming better.

Prefacing a sentence with this phrase automatically makes people tune out. It suggests that you’re stating the obvious and therefore wasting everyone’s time!

Smart people just keep this phrase out of their vocabulary. They don’t want listeners to become less engaged in what they have to say.

When someone prefaces a statement with “with all due respect,” it usually means they’re going to say something disrespectful. When they say “no offense,” it usually means what they’re about to say will be offensive. And guess what? People on the receiving end know this!

Instead of using these phrases, try to find a way to take disrespect or offense out of the equation altogether. Smart people don’t want to put someone on the defensive before they’ve even gotten their point across!

5.    I am merely attempting to inculcate the perception whereby….

There’s nothing wrong with having a big vocabulary. But smart people know that there is a time and place for showing off bombastic words. Everyday, casual conversation is not one of them! In fact, it makes you sound like you’re trying too hard and can be cringe-worthy.

You attract what you think, and smart people know this. If you think you can’t do something, then you probably can’t – an idea immortalized by Henry Ford. So think you can, and you’ll find a way! Utilize positive thinking and don’t be overly pessimistic.

Constantly apologizing is not a smart person’s habit. It shows you as overly submissive and makes it easier for others to assume you’re in the wrong. Instead of apologizing next time, try these phrases instead:

This helps you sound more confident and shows that you’re intelligent, capable, and worthy of respect!

Implying others are stupid and that you’re well above them in intelligence doesn’t make you look smart. In fact, it’s quite the contrary – people will probably be offended by that kind of attitude! A quick trip into Reddit’s r/iamverysmart will show you exactly what we mean.

No one comes into the world knowing everything. When you act like you’re above everyone else instead of politely educating others, you’re being counterproductive. It’s arrogant, pointless, and honestly makes you sound much less intelligent than you may think you are!

Complimenting someone and adding something about their identity to justify the compliment is unflattering, rude, and unnecessary. This means phrases like:

Saying things like this shows that your thoughts are governed by stereotypes. It suggests you have trouble seeing others as unique individuals. That’s not very smart at all!

Even if you only played a small role in an error, own up to it. Holding yourself accountable shows bravery, a willingness to change, and a good heart. It also suggests intelligence, as intelligent individuals strive to learn from mishaps.

Even if you had no hand in a mistake, casting blame around is not helpful. Smart people don’t waste time on pointing fingers. Instead, they move on quickly so that the mistake can be fixed.

Ask any freelance worker about their worst client experiences and they are sure to bring up buyers who asked for free work.

Smart people know that time is money because their own time is valuable to them. As such, they understand that the time of others is equally valuable. They do not feel entitled to the skills of others.

If you only have negative thoughts about your job, you’re going to hate it even more. When a job is really terrible, smart people will find other options. Can they afford to quit? Can they work towards a certain goal? Can they talk to someone about bettering the workplace environment? If not, can they practice better positive thinking?

While you shouldn’t make promises you can’t keep, you also shouldn’t be afraid of making too many promises that you can keep. As Yoda once said (and I’m paraphrasing here), “There’s no try – only do, or do not!” Smart people aren’t afraid of making a commitment to a task, and this inspires others to believe in them more.

Just because everyone does something doesn’t make it right. Smart people know better than to follow the crowd for the sake of fitting in.

If something is wrong, smart people know how to speak up. If they can’t actively have an impact just then, they will do things the right way regardless. They know that one small action can make all the difference.

Generalizations make it sound like you’re incapable of thinking beyond stereotypes. While there is some truth to stereotypes, judging all people based on them isn’t what smart people do. This means phrases like:

Many times, generalizations reveal inner prejudices and a reluctance to see others as they truly are. And let’s face it – prejudice isn’t smart, and never will be!

No one is perfect. According to behavioral science professor and author, Kristen Lee Ed.D., LICSW, expecting perfection is to set yourself up for failure. Smart people are aware that things cannot be flawless. Instead, they work on doing things to the best of their abilities, and expecting others to do the same. Then, they can make minor improvements and learn from mistakes.

These are typically exaggerations. For the most part, few people “always” or “never” do something. Even when you don’t think they’re overstatements, those statements only add fuel to the fire of arguments or disagreements. They create drama, cause tension, and put listeners on the defensive. Smart people use calmer, more positive language.

It’s very rare that someone truly doesn’t care about something. This is often a statement said emotionally, meaning that most people who use it do care, at least to some degree. So using this phrase under these circumstances is extremely counterproductive, and a smart person would never do that!

This is a childish phrase that doesn’t accomplish anything. Instead of trying to “win” an argument, smart people want to find solutions to problems. The mistake they warned the perpetrator against has been made, and what’s done is done. Now, they just want to fix it, which is the intelligent way to handle it according to Gregory L. Jantz Ph.D.

There is no such thing as a dumb question. But prefacing your queries this way certainly make them sound dumber! It can also put the listener into the wrong mindset, preventing positive thinking as they dread what you’re going to ask.

Smart people know that speaking with confidence is key. They are not afraid to ask questions because they know requesting clarification is better than making assumptions.

Well, that’s just life – it isn’t fair sometimes. Complaining about unfairness makes you seem immature. When smart people think something is unfair, they will try to better understand it.

They will communicate with the person who they think has an unfair advantage in order to gain their perspective. They’ll talk to others about how things can be made more balanced. They know complaining will get them nowhere!

Some people think saying things like this shows that they are calm and at peace with the world. What this phrase actually denotes is a lack of desire to make things better. Smart people don’t settle for bad deals. If something is bad, they will take steps to change it.

It’s important to fight mob mentality if you want to be intelligent. Just because no one does it doesn’t mean it should not be done!

Smart people know that putting in a little extra effort can go a long way. That’s how they’re able to find success! By setting a good example for others, they become leaders and trendsetters.

Even when you have no opinion about something, that doesn’t mean you should remain passive. Smart people will take the time to contribute to a discussion. Here are some examples of things you can say instead of retreating to the background: 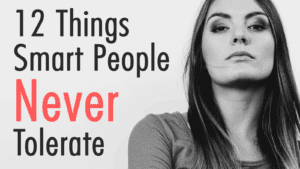