The body positive movement is in full swing and this is a good thing. Not only is it boosting people’s confidence, but it is also causing them to get to know themselves and their health better. Sometimes the smallest changes or characteristics in your body, physically, mentally, and emotionally,  can tell you a lot about your overall health.
It’s good to take a close look at yourself and evaluate your health every week. What’s happening in your body and how you feel is a direct reflection of the state of health. Here are 21 things your body can tell you about your health …


Chapped lips happen, but if you experience this issue frequently, it might signal an allergic reaction or dehydration. When caused by an allergy, it is referred to as allergic cheilitis. The most common causes include lip cosmetics, medications, dental hygiene products, metals and foods, according to the New Zealand Dermatological Society.

Foot swelling is not uncommon. In fact, it is to be expected when women are pregnant or after people spend countless hours on their feet. However, when there is not obvious cause, talking to your doctor about heart failure might be in order. This condition is characterized by the heart not effectively pumping, resulting in fluid retention. Unfortunately, this condition is not uncommon, and it is estimated that every years in the United States, 550,000 new cases will be diagnosed, says Emory Healthcare. This condition can affect people of all ages, from children to the elderly.

Under normal circumstances, your tongue should be pink, moist and taste buds should be visible. If your tongue is dry and pale, this could indicate an iron deficiency, according to acupuncturist Katie Clifton. A quick blood test will tell you if your iron levels are too low.

Your sweat and how it smells can give you a lot of information about your general health. For example, your blood sugar might be abnormal if your sweat takes on an acetone odor. Dr. Lawrence Wilson states that those with diabetes might also have a sweet smell due to the sugar accumulating on the skin. Liver or kidneys problems might be present if it smells like ammonia.

5. Check the Length of Your Fingers

Women want to examine their ring and index fingers to see which is longer. A study in Arthritis & Rheumatism in 2008 concluded that women whose ring fingers are longer compared to their index fingers were twice as likely to develop osteoarthritis in their knees.

If your feet smell despite clean shoes, socks and proper hygiene, you might be dealing with athlete’s foot. This condition occurs as the result of a fungal infection and it is mildly contagious. It generally presents as a rash that is scaly and red, says the Mayo Clinic. Profound itching is common, and it tends to be at its worst when you first remove your socks and shoes.

In women, if hair is growing where it typically does not, this can signal an issue with your health. One of the most common reasons for this is polycystic ovarian syndrome. This condition is characterized by different metabolic problems and a hormonal imbalance. The abnormal or excessive hair growth is generally due to your body producing too many male hormones. The hair may grow on the face, back and in the ears. It is estimated that throughout the world, approximately 8 to 20 percent of women have this condition, states the NICHD.

When these first occur, most people think they just need to exfoliate or scrub harder. However, the American Academy of Dermatology says that these patches might signal a medication reaction or pre-diabetes.

Women with calves under 13 inches around might be at a higher risk of having a stroke, according to a 2008 study in the journal Stroke. The increased stroke risk is associated with those with smaller calves tending to develop carotid plaques more often. Having more subcutaneous fat in the lower legs might reduce the risk of plaques by taking fatty acids out of the bloodstream.

Women whose breasts are a D cup or larger when they were age 20 may be 1.5 times more susceptible to developing types 2 diabetes compared to women with an A cup or smaller. The study, which was presented in the Canadian Medical Association Journal, theorized that this might be due to the hormonally sensitive fat in the breasts making women more vulnerable to developing insulin resistance.

Women who have shorter arms are said to be up to 1.5 times more vulnerable to Alzheimer’s disease, states a study in Neurology published in 2008. A short arm span is said to be 60 inches or less.


Having some puffiness and minor swelling under the eyes is often attributed to lack of sleep and excess stress. While these can certainly be culprits, hormonal changes and salt intake also play a role. Dr. Sears states that food sensitivities or allergies might also be to blame for puffy eyes, especially in children.

Your ability to maintain your cognitive abilities later in life is something most people are concerned about. If you are nearing or in your 40s and your abdomen is on the large side, your chance of developing dementia in your 70s is up to 3.6 times more likely than your smaller waisted peers, according to a 2009 study in Neurology. This is believed to be due to more inflammatory hormones being produced by the higher level of visceral fat.

As long as a short person does not have major medical issues, they tend to live longer than their taller peers, says research presented in Anthropological Review. It is believed that this is associated one of the genes responsible for short stature also being partly responsible for longevity.

Research recently conducted at the Dana-Farber Cancer Institute shows that people with type O blood, either negative or positive, are less likely to develop pancreatic cancer. In fact, those with AB, A or B blood had a 44 percent increase in their risk of developing this type of cancer in life.

If you notice that over time your teeth become more stunted or uneven, this might tell you that you are grinding your teeth in your sleep. Teeth grinding is typically associated with increased stress, according to a report on Colgate. 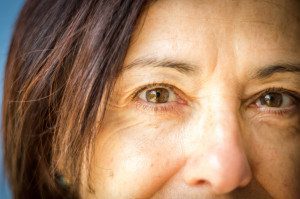 As you get older and collagen production slows, so it is natural for wrinkles to start forming. However, if you are in early menopause and you notice wrinkles, your bones should be your primary concern. In Boston at the Endocrine Society Meeting in 2011, research was presented that linked early wrinkling to osteoporosis. The research said that the quality of a woman’s skin was a clue into her bone mineral density, and that the distribution and severity of wrinkles often correlated with a lower bone density.

Your toenails and fingernails can act as windows into your general well-being. If your nails develop side-to-side lines, this can indicate stress. Small cysts around the cuticles might signal arthritis. Kidney disease symptoms might in side-to-side lines, white spots or streaks and ridged nails, says the Cleveland Clinic.

What comes out of you can be just as telling as bodily changes and characteristics. When stools are especially smelly, consider what you have consumed recently. If you notice a correlation between smelly stools and eating dairy products, this could signal a lactose intolerance, according to AARP. Urine having a chemical smell could mean a urinary tract infection, usually due to the E. coli bacteria.

Occasional dry skin is normal, especially when the weather is cold and dry. However, if your dry skin is not alleviated by moisturizers and drinking more water, an underlying condition might be at play. Nutrient deficiencies, diabetes and hypothyroidism are common causes of dry skin. The following nutrient deficiencies might contribute to dry skin: essential fatty acids, vitamin E, vitamin D, vitamin A and potassium, says Susan Evans, MD.

Make sure to take a good look at yourself and evaluate your health about once a week. It is a direct reflection of your state of health. If you notice changes that are problematic, make an appointment with your doctor.

doIn the past, a broken hip for a senior person usually led to an early death. Fortunately, advances in medical scie...

The choice to wear a face mask could be a valuable tool in preventing the spread of germs and viruses. A recent s...

Scientists Reveal How Having a Regular Sleep Schedule Improves Health

Many people today suffer from chronic sleep deprivation. That problem partially comes from the fact that many don’t ...