Nausea is a feeling that no one wants to deal with. It’s unpleasant, but this feeling can happen in any situation, like when traveling and at any moment during pregnancy. To treat nauseous feelings, many people use anti-nausea medications. However, these medicines often have side effects like drowsiness that make using them a challenge.

Instead of putting up with this feeling or having to deal with the side effects of the medicine, many people looking for nausea remedies are opting for more natural options. The following methods are the best for treating this nauseous feeling:

Ginger is one of the more popular choices for natural cure-alls. What’s more, ginger is a great way to treat nauseous feelings naturally.

Though ginger is a superfood, its powers aren’t fully understood. Experts agree that ginger is made up of compounds that act in a way that is similar to other medications.

Many studies show that ginger is incredibly effective in trying to reduce nauseous feelings in many different situations.

There isn’t a consensus on the proper dosage that one needs to take to reduce the effects of nauseous feelings. However, in the study, most participants were given around 0.5 – 1.5 grams of ginger root each day.

While ginger is relatively safe, individuals may need to lower their ginger intake if they’re prone to having low blood sugar or low blood pressure, especially if they are taking blood thinners.

Pregnant women should ask their doctor before treating nauseous feelings with ginger. There are only a few studies regarding the use of ginger during pregnancy, but the studies show that healthy pregnant women are less likely to experience side effects. Thus, many experts believe that ginger is safe to use during pregnancy.

Peppermint aromatherapy can be used to reduce nauseous feelings.

A study that assessed peppermint aromatherapy’s effects on women after a C-section birth showed that after being exposed to the peppermint, these women rated their nauseous feelings as being significantly lower than individuals given placebos or anti-nausea medications.

Many experts even suggest that drinking peppermint tea can provide similar anti-nausea effects, though there haven’t been any studies to back this up.

Individuals that have taken peppermint oil in pill form have experienced mixed results. Some have seen benefits, while others see no change in their nauseous feelings.

Additionally, there is very little information available regarding the safety of consuming peppermint oil.

Acupressure and acupuncture can be used to treat vomiting and nauseous feelings.

With acupuncture, professionals use thin needles on certain pressure points all over the body. With acupressure, experts aim to stimulate similar points on the body. However, this pressure is used in place of needles.

These techniques are ultimately used to stimulate nerve fibers, allowing signals to be transmitted to the spinal cord and the brain. These signals have the ability to abate nauseous feelings.

Some evidence even shows that during pregnancy, acupuncture can be used to treat nauseous feelings, but more studies need to be done.

Looking for a way to harness the power of acupuncture without having to go through the spine-tingling process? You can stimulate the acupuncture point on your own.

This nerve is located two or three finger widths away from the inner wrist, located between your two prominent tendons.

Once this point is located, you will press your thumb down for a minute. Then, repeat the process on the other arm. Keep repeating until the nauseous feelings melt away.

The smells from a fresh lemon can be used to reduce nauseous feelings, especially in pregnant women.

For many people, simply scratching or slicing a lemon is enough to release its essential oils. Similarly, having a vial of your lemon essential oil might be enough to reduce nauseous feelings if you are on-the-go.

Controlled breathing is one of the best all-natural nausea remedies. By focusing on your breathing patterns, you’ll find that you can think clearer and feel less nauseous.

This is why controlled breathing is such a powerful part of meditation. As taking time to focus on one’s breathing works to calm the body, it is one of the easiest natural alternatives anybody can use to help become focused.

To take control of your breathing, inhale through your nose and count to three. Then, hold your breath while counting to three, and finally, release your breath.

Certain spices can be used as a way to deal with nauseous feelings.

The following three spices are proven to fight nauseous feelings:

7. Work on Relaxing Your Muscles

Oftentimes, anxiety can bring about nauseous feelings. Before resorting to medication, try muscle relaxation. This is the process of intentionally tensing your muscles, then relaxing them.

One of the more common ways to use muscle tension to relieve stress or nauseous feelings is through massage.

In a study of patients going through chemotherapy, individuals that were given a lower leg or arm massage found that they were 24% less likely to feel nauseous after the fact.

Vitamin B6 has become increasingly popular as an all-natural way for pregnant women to relieve their anti-nausea symptoms.

Vitamin B6 is typically seen as safe to use for pregnant women with virtually zero side effects.

Foods like rice, bananas, baked potatoes, crackers, or applesauce are also excellent options to help relieve nauseous feelings. This will also help to decrease the likelihood that you will suffer from an upset stomach.

Protein-rich meals are an excellent way to stave off nauseous feelings. Whether you eat more meals that are high in protein or supplement your diet with protein pills or powder, you will be less likely to become nauseous by eating food with more protein.

Individuals that are used to eating larger meals should consider downsizing. By reducing your meals in size and increasing the frequency with which you eat, you will likely be able to reduce your symptoms.

Yoga and aerobic exercise can be used to help reduce nauseous feelings. These exercises harness the power of controlled breathing, allowing the calm of meditation to settle any uneasiness. 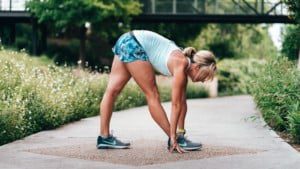 Drinking during meals can lead to increased feelings of fullness. This can have the effect of worsening nauseous feelings in certain people.

While you may be used to drinking during a meal, consider having your beverages before or after a meal.

Dehydration is another way to bring on nauseous feelings. If you are feeling nauseous and are also vomiting, it is likely that you are dehydrated. Replace any lost fluids with a drink that is rich with electrolytes.

Mineral water is a good choice for anyone in need of hydration, as is regular water, a sports drink, or vegetable broth.

Smells that are incredibly strong can worsen nauseous feelings. During pregnancy, these strong smells can intensify, making your nausea worse.