Happiness is surprisingly difficult to define. Most people accept the psychological definition: a pleasant feeling of well-being that can range from contentment to joy.

Greek philosophers, by contrast, defined happiness more broadly as “eudaimonia” or “flourishing.” They saw it as an activity rather than an emotional state. A happy person was somebody who led a good and fulfilling life. As can be seen by the following quotes about happiness, many people had opinions about what happiness was and how one could become happy.

“Happiness is the meaning and the purpose of life, the whole aim and end of human existence.” – Aristotle

In 350 BC, the Greek philosopher Aristotle wrote the “Nicomachean Ethics,” in which he declared that happiness was the only thing people valued for its own sake. They valued other things like love or riches, because they believed such things would make them happy. Aristotle also believed that the best and happiest life was one governed by reason.

Quotes About Happiness and Purpose

“Give a man health and a course to steer, and he’ll never stop to trouble about whether he’s happy or not.” — George Bernard Shaw

Many believe that people need a sense of purpose in order to be happy. They need to feel that their lives have meaning and that they are contributing in some way to their family or community. A person who feels they have a purpose is under less stress than somebody who sees their life as pointless. As Shaw stated, the former may be too busy following their passion to even worry about happiness.

Happiness Quotes About Absence of Pain

“Happiness is not being pained in body or troubled in mind.” – Thomas Jefferson

“Happiness? That’s nothing more than health and a poor memory.” – Albert Schweitzer

Both Jefferson and Schweitzer describe happiness in its most basic form as an absence of pain. It is very hard to be cheerful if you’re ill and feel physically wretched. Schweitzer’s sarcastic comment about a “poor memory” is actually true: Happy people do not brood on misfortunes or slights.

Attitudes That Lead to Happiness

“Folks are usually about as happy as they make their minds up to be.” – Abraham Lincoln

“For every minute you are angry, you lose sixty seconds of happiness.” – Ralph Waldo Emerson

One reason that philosophers tend to view happiness as an activity is because it takes self-discipline to keep yourself from fretting or brooding over things outside your control. A happy person has learned better than to worry about things they can’t change.

“If more of us valued food and cheer and song above hoarded gold, it would be a merrier world.” – J.R.R. Tolkien

The above quote comes from “The Hobbit,” and the speaker is the dying Thorin Oakenshield, who regrets both his greed and his treatment of Bilbo Baggins, the titular hobbit. Thorin realized, belatedly, that gold is less likely to lead to happiness than are the simple pleasures of spending time with friends.

“If you look to others for fulfillment, you will never be fulfilled. If your happiness depends on money, you will never be happy with yourself. Be content with what you have; rejoice in the way things are. When you realize there is nothing lacking, the world belongs to you.” – Lao Tzu

In 2010, researchers at the Woodrow Wilson School of Princeton University conducted a study to determine if there was a link between money and happiness. They surveyed 450,000 people over a two- year period. They found there were actually two forms of happiness: transient happy moods and a deeper, more constant satisfaction with one’s life. The latter was greatest in people who were earning around $75,000 per year. A person with that type of income could pay for the things they needed and cover the occasional emergency. The researchers thus found that it is easier to be happy if you are not constantly worried about bills. They also found, however, that happiness had a plateau; people who had a lot of money were no happier than people who had enough to meet their needs. 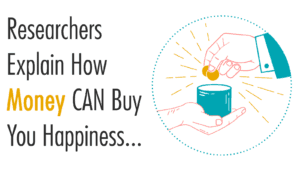 Quotes About Happiness and Kindness

“Thousands of candles can be lit from a single candle, and the life of the candle will not be shortened. Happinessnever decreases by being shared.” – Buddha

“The best way to cheer yourself up is to try to cheer someone else up.” Mark Twain

The above happiness quotes define happiness as a way of life that satisfies people. The happy person has found a calling and is kind to others. As the last three quotes state, the happy person shares their good fortune and mood with other people. Helping another person actually increases the happiness of both; the person being helped gets whatever they need, while the helper gets the satisfaction of accomplishing something worthwhile.