A hack is any simple act that supposedly carries with it tremendous benefits – a shortcut if you will. For a hack to be a hack, it must require relatively minimal cost, effort, and time. Therefore, health hacks will make you healthier and save you time.

We’re going to add one more requirement for the purpose of this article. Any hack mentioned here must be backed by science.

Why? Because this article is about health and self care. While there is certainly a place for home remedies and complementary medicine, when it comes to health applications, there must be at least a modicum of proof. At least here.

One look at the “health hacking” landscape, and it’s clear why evidence is necessary. Per an article published in the New York Post, Americans devise and partake in nearly 20,000 hacks over their lifetime. Some of these hacks are legit: eating more fruits and vegetables, limiting sugar intake, etc. Others, well, not so much.

In this article, we’re going to focus on health hacks. These hacks are promised to do three things: (1) make you a healthier person… (2) … with less time and effort, and (3) make your life easier!

Here are eleven health hacks that will help make your life easier: 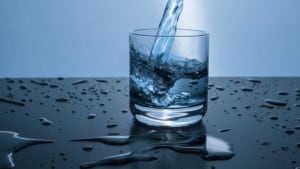 Yeah, you know what we’re getting at here! You resolve and promise to drink more water, but you don’t. Well, most people don’t: about 75 percent of Americans are chronically dehydrated.

It’s not like people don’t try. But we can only keep so many things on our mind at once. And we’re terrible at remembering where we put things. Hence, the need for a wristband. It’s kind of hard to ignore something when it’s latched to your arm – just ask any whining child.

We’ll even give you permission to unlatch yourself once you get into the water-drinking habit! (You’re welcome!)

All joking aside, water is critical for every cell in your body to properly function.

As a reminder, it’s necessary to drink a minimum of 64 ounces of water per day. The average water bottle is between 12 to 16 ounces.

You love your morning coffee; us too.

What we don’t like is the irritation and the inevitable caffeine crash that comes with it. Enter (unrefined, organic) coconut oil.

Thousands of studies have been done on the benefits of coconut oil. Here are just a few science-backed benefits:

The only drawback to using coconut oil is its amount of saturated fat. As such, coconut oil should be used wisely and in conjunction with a balanced diet and exercise plan.

Here’s the thing: the mind is always in a rush. Have you ever noticed how people are always in a hurry when they’re driving? Even when they have no place to go, drivers will honk and scream at anyone who dares, well, drive.

Some of this attitude carries into how we eat. That is, we have a strange tendency always to want to scarf down food. It’s not good for anyone.

Using smaller sized serving plates, bowls, and silverware likely cause you to eat less. It could have everything to do with how your brain perceives food.

In a dual study conducted by researchers at Kent State University in Kent, Ohio, participants who used a portion-control plate served themselves proportionally less food than did others. Unfortunately, the researchers note, all study groups underfed themselves vegetables! Which leads us to the next point…

Okay, okay, so this fifth one may seem more like a common-sense tidbit than a hack. But we’re going to put it here, anyways. How is eating vegetables a hack, you ask?

Firstly, most vegetables are very cheap. Secondly, they’re very simple to prepare and consume. Last, we drastically underestimate their benefits.

‘Cruciferous’ vegetables like broccoli, cabbage, and kale, in particular, are exceptionally healthy. Research shows that these veggies:

Take your face out of your phone screen – at least until you finish your meal. It turns out that mindful eating is a much healthier option.

In a study published in The American Journal of Clinical Nutrition, researchers tested how the manipulation of attention, awareness, distraction, and memory had on food consumption.

After reviewing 24 studies, the results showed that when people are distracted by media, they eat, on average, 39 percent more. Worse, they continued to overeat throughout the day.

Many Americans aren’t too good at managing their health. A big reason for this is that we just don’t eat very well – and it’s not just the U.S. According to a 27-year global study on countries dietary habits, approximately one in five deaths is because of poor diet.

The study cites excess sodium and sugar as well as too much processed and red meats as one reason. The other: a shortage of fruits, nuts, seeds, and whole grains.

Despite all of the great things we’ve given the world, it sometimes feels like we Westerners just don’t get it. Especially when it comes to health and wellbeing, including sleep.

Per a survey of 20,000 Australians, just 12 percent report waking up feeling “refreshed.” Three-quarters admitted to having difficulties sleeping.

This is bad. Research continually shows that poor sleeping habits are linked to “serious medical conditions, including obesity, heart disease, and diabetes –and it shortens your life expectancy,” according to the U.K. National Health Service (NHS).

It’s almost as if we can never squeeze enough minutes into a day, right? Our stressful lifestyles lead us to neglect essential elements for health, including proper exercise.

Per a 2013 article published in the Journal of Sports Science and Medicine, just four minutes of Tabata’s workout results in a 28 percent increase in anaerobic activity.