Pregnancy after a woman is above 35 years old can present various risks and challenges. These can include stalled labor, dramatic emotional changes, chromosomal abnormalities, and more. Some of these risks can put both the mother and the infant in danger.

However, with the doctor’s advice, women aged 35 years or more can get pregnant and give birth successfully. They will often need to put forth more effort in terms of diet, exercise, and lifestyle than their younger counterparts.

Here are ten truths about pregnancy after 35

Older females normally get lucky enough to have twins. It is a fact that twin births are more prevalent in pregnant females who are aged 35 years or more.

Scientists are not certain of the reasons behind this occurrence, but recent research has shown that the answer to this question could lie in the increased use of particular medications and hormonal changes. The study looked into incidences of fraternal twins, which are more typical than identical twins.

First, older females have higher levels of a certain hormone called Follicle Stimulating Hormone (FSH). This hormone has been associated with a higher prevalence of twin births.

One of the many truths about pregnancy after 35 is that these women face a higher risk of stillbirths and miscarriages than younger women. This risk of having a miscarriage increases with age.

For example, while females who are 35 years old face a 20 percent risk of miscarrying, women 45 years old face a 35 percent risk. These high rates of loss of pregnancy are believed to be a consequence of underlying health issues that affect older females, and the presence of abnormalities of the chromosome in the fetus.

Unluckily, pregnancies can end spontaneously, even during the late stages. It is essential to keep a continuous dialogue with your healthcare team as you get into the final stage of your pregnancy. You should also be very keen to optimize your meals, lifestyle choices, and activity levels in an effort to safeguard the health of your baby.

If you are 35 years or older and are pregnant, your physician will provide you with various genetic tests to check for particular chromosomal abnormalities that get heightened with more mature pregnancies. For example, chorionic villus sampling is a test carried out when a pregnancy is between 9 and 11 weeks.

This test is critical in the detection of Turner’s Syndrome and Down syndrome. During the procedure, a physician will take a slight sample of placental tissue that can be obtained via entry points in your cervix and abdomen. The tissue is then analyzed in a lab.

Scientists have not discovered the reason behind the higher rates of genetic disorders in infants born to females aged 35 years and above. However, the relationship between these genetic conditions and the age of the mothers is very robust.

While it is optional to undertake tests such as chorionic villus sampling, the majority of prenatal caregivers and physicians will highly recommend them to older pregnant females. It is an excellent idea to undertake these tests. It is better to know in advance in case your baby will have a genetic condition so that you can prepare yourself properly.

Another one of the truths about pregnancy after 35 is that a healthy and balanced diet is critical to all pregnant females, despite the age. Frequently, an older female is more susceptible to gaining weight when they are pregnant, which can result in energy drains and more complications during the pregnancy period.

However, prenatal vitamins and a properly-balanced diet that emphasize quality proteins and whole, natural foods should be essential in the prevention of too much weight gain. This will also ensure proper nourishment of the infant and the mother.

Specifically, pregnancy nutrition experts and physicians recommend an increase in the intake of calcium; it is also better to use natural sources than supplements. Have a goal to consume at least four servings of dairy rich in calcium daily. Also, include plenty of fresh vegetables and fruits, particularly citrus fruits and leafy greens.

Lean meat, whole foods, and beans must round out your meals. In case you crave salty and sweet treats, be sure to eat them in moderation.

Females who get pregnant at 35 years or more have a higher likelihood of getting particular complications during this period, including high blood pressure and gestational diabetes.

Gestational diabetes is a disease whereby a pregnant lady suffers from insulin imbalances, resulting in a diabetic condition that may or may not remain after the birth of the baby. In particular cases, this condition leads to early labor as well as premature birth.

Older pregnant women have a greater risk of getting high blood pressure due to the strain on their bodies that they experience during gestation. To prevent yourself from suffering from this condition, be sure to make better lifestyle and dietary choices.

You will need to be conscientious regarding your efforts. But the soundest decision is to visit your physician regularly so that they can be active in your prenatal care. Your healthcare team can intervene and aid you in case you reveal symptoms of these complications.

6. Every Woman is Different

Regarding gestation and age, 35 is only a number; and every lady’s actual chronological age is different from their biological age. While some females have a family history of a conception that is difficult, others will conceive easily in their late 30s and even 40s.

A successful gestation is determined by your health and how well you have cared for your body throughout your life. At the age of 35, you are still young and can implement critical improvements to your general health that can increase your likelihood of getting pregnant. Doing exercise regularly, losing weight, and boosting your diet can assist in giving you a normal gestation.

Hence, if you have been overlooking these vital health aspects, invest in your health and yourself. You will discover that being pregnant in your 30s and 40s is not as hard as you had originally thought.

7. It Could Take A Long Time to Conceive

In addition to facing the issue of lowered fertility, you will experience hardships with timing conception after you reach 35. For example, where a couple in their 20s can take just a few weeks to conceive, couples who are 35 and older usually take years to get pregnant.

Scientists and physicians have discovered some essential factors that impact the successful conceptions, and age is one of them. This is one of the truths about pregnancy after 35 that you need to accept; you can take years to get pregnant. 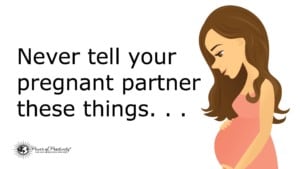 Other key factors include the timing of sexual intercourse, which should be carried out during your ovulation’s peak. Your doctor can assist you in keeping track of this so that you can have sex when you are at the height of your cycle,

Weight, lifestyle, and nutrition can also affect your likelihood of conceiving. Hence, you should keep in mind that optimizing these factors can take a while as you lose weight, improve your meals, and make adjustments in your choices and habits.

8. The Decline in Egg Quality

As females age, they face a natural deterioration in general fertility. This means that older women will ovulate with declining regularity and predictability, and they could occasionally miss releasing an egg.

The quality of the egg also starts to diminish from the age of 30 to 40. This is what causes genetic egg imperfections and less likelihood of conceptions.

As a result, older females often undertake fertility treatments when they are attempting to get pregnant. These treatments work to improve the quality of the egg and stimulate the production of eggs.

Research has shown some truth in these emotional changes. These changes in emotions and moods present themselves as dramatic and sudden mood swings.

In case you are pregnant at the age of 35 years or more, there is a higher likelihood of getting a cesarean section as you deliver. This is due to the greater risk of complications during gestation and delivery. These complications may include excessive bleeding, prolonged labor, and stalled labor, which takes place when labor processes cease before the delivery of the infant.

When it comes to older women, cesarean sections are deemed safer than vaginal births. Another common complication that can indicate the benefit of cesarean section is the presence of the placenta previa condition. This occurs when the placenta blocks the cervix during birth.

The Bottom Line on Pregnancy After Age 35

It is common for women aged over 35 to give birth to healthy newborns, but it is also common for them to face these challenges and risks.

Hence, they need to put these truths about pregnancy after 35 in mind. Carrying out the necessary changes will help ensure they have a successful pregnancy and birth.