Only a Virgo can understand just how simple, yet complex our personalities are. No wonder we are often misunderstood and withdraw from people who just don’t get us. But, they know that they are pretty amazing people and are able to find a select few trustworthy friends to have around who appreciate them.

Astrology is often thought of as having more entertainment value than science, but psychologists are now looking at astrology as a way to understand people, just like personality theories seek to understand them in the social sciences. There are four elemental groups of astrological signs, of which Virgo is an Earth sign. Many personality theories also group types into four main categories.

Earthy Virgo is the altruistic, other-centered personality type of the zodiac. They want to connect to others and, according to a review in Correlation: Journal of Research in Astrology, they as a personality ‘values his or her membership within a family or community group above all else.’

10 Things You’ll Only Understand If You’re A Virgo 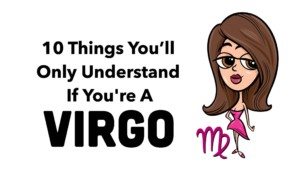 Our modern astrology system has ancient roots, going all the way back to the time of the ancient Sumerians and may be as old as 7000 B.C.E. In ancient Turkey, Iraq, and Syria, the earliest known image of Virgo was discovered pictured as a woman holding a sheaf of corn. This image dates back to around 6000 B.C.E. In Egypt, Virgo was represented by an upright Isis-type figure.

Only a Virgo can understand the intense grudge that we can hold, which is the seed for a growing sense of righteousness and vindictiveness, and is eventually harvested by writing you out of our lives completely. And, as the excellent communicators that Virgos are, you also should understand that everyone will know the reason that we curse the day we met you.

The pictorial representation of Virgo may be a virgin, but the people who were born under her sign possess a deep wisdom beyond their years on this planet. Virgos are smart, have many talents, and they can and prefer to do just about anything on their own without help.

3. They love to talk

Virgo is the chatty friend you have who you have to actually tell to stop talking so you can break off the conversation after you dropped 4 hints about needing to get going already.

4. People see them as obsessive, but they aren’t

Only a Virgo would know the difference between being tidy, organized, punctual, methodical, and a perfectionist versus being obsessive about something. Virgos do not think they are obsessed with anything, except for paying all of the bills early.

5. They are always right

Only a Virgo could understand that there’s really nothing amazing to how often you are right, which is all of the time. Virgo is very good at analyzing data and the tiniest details, and if you have happened to bring up a subject that we are passionate about, we will recite all of the knowledge stored in our vast brains.

6. They are never wrong

See above, but if, on the off chance a Virgo is actually proven to be wrong by actual verifiable evidence, they will hate you for pointing it out. Virgos are sore losers and being right is like a game to them, and they like to win.

7. People think you don’t care, but you do, deeply

Virgos tend to withhold their emotional expression so they can be hard to read. Or rather, people tend to think that they’re mad at them by the blank expressions on their faces.