Our mothers can be the salt of the earth sometimes, and we love them for it. Science has proven that most intelligent children inherit that trait from their mother. So if you have the “smart gene,” you likely have your mother to thank. But really, there’s a lot more we can thank our own moms for. What’s more, there are a lot of parenting lessons they have learned that we can relate to.

You might be surprised to hear that science has shown we’re genetically wired to mimic our parents from a very early age. You’ve probably uttered some of the following “mom-isms” yourself and then had a fright, realizing that your voice sounds just like your mother’s! In fact, there are specific reasons why we can all relate to these statements!

“A child’s first teacher is its mother.” – Peng Liyuan

This is probably the most common line of reasoning for your mom (and really any parent). In fact, eight out of ten moms admit to using this almost every other day. It’s a sentence that pretty much every mother in the world has said at least once. Perhaps you’ve found yourself saying it to your own kids as well. Think about this phrase a bit more – what’s the lesson behind “Because I said so”? It cements your position in your child’s estimation as their parent.

In other words, this statement creates authority for you. While your kid won’t agree with everything you say or believe as they grow older, they’ll know they still need to respect and hear out your opinion no matter what.

2. “If all your friends jumped off a bridge…”

We tend to hear this one more when we’re teenagers because that’s the time we’re most affected by our friends and social groups. Perhaps you thought this was one of the more annoying statements your mother has made. However, don’t be quick to lose your positive thinking. When you become a parent, you realize it’s important to teach your kids that sometimes going against the grain is a good thing. They need to be individual in their choices and not do something just because, “Well, everyone else is doing it.” So, no matter how annoyed they are now, they’ll thank you later!

That’s not a phrase reserved just for mothers, as it goes all the way back to grandparents and great-grandparents. They love saying how “their” age was better than yours, or how kids “their” age were smarter, or anything like that. At the time, you might think you’re above it all, but you eventually find yourself defining “your” age and telling your kids how it was “back then.” Reminiscing is a good thing though, and it helps keep things in perspective.

The world has grown a lot since your mom – and her mom, and her mom – were children. Think of it this way, whenever you begin a statement with, “When I was your age …” you’re giving your child a free history lesson. What is more, you’re adding the story of your personal experience, and that’s always a good thing.

This almost sounds like an ominous warning when you’re younger. That when you have kids, you’ll “know.” Know what? If your mom ever told you this, you’ll most likely find yourself repeating it, too. And you would be right – there are certain lessons you can only learn when you do become a parent. Responsibility takes on a completely different dimension, as does the love you feel towards those little ones in your care.

Those things are obviously very difficult to understand, so when you are a mom, you just say that they’ll “know.” Then you hope for the best.

It’s funny how moms always ask those questions, as if they don’t know that they were the ones who raised you (in their house). We naturally say them ourselves when our own kids are misbehaving or they eat with their mouth full or forget to close the door softly. The phrase is a good reminder that we should all be polite and courteous in any social situation. Even if you can’t relate to that so much as a kid, you can definitely appreciate it as an adult.

This humorous phrase serves as the beginnings of creating your social skills and perfecting them so you can fit into society easily. 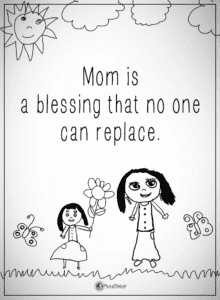 Now it’s questionable whether this is more of a mom phrase or a dad phrase. Still, in today’s world of gender equality, anyone can be the breadwinner, so anything goes! When mothers say this, it’s normally because their kids ask for something – and any parent knows that having a child is a huge financial responsibility.

Looking at the positive side of it though, it also teaches children the important lesson of being financially sensible. This is crucial in today’s world when children are bombarded with expensive product after expensive product. As they grow, they’ll know how to say no.

It’s fascinating how the physical dimension of the house comes into this one. “As long as you’re under my roof, it’s my rules,” moms often say, especially to their mostly-grown-up kids. This phrase often comes into play if teens are trying to do something “rebellious,” such as get a tattoo. There’s another important lesson here: homes are our sanctuaries and should always be a safe space. As such, whatever we say in them goes. The sooner we learn this, the sooner we begin to appreciate our own homes.

This is the one you probably swore you’d never ever say to your own children, under any circumstance. And it’s probably one of the first ones you ever did end up saying. However, “one day” teaches the lesson of gratitude. What’s more, it shows that we should never forget what helped us get to where we are now. Especially mothers, who played a foundational role in it – by giving birth to us.

Didn’t you always wonder why your mom paid more attention to your tone than the words you said? Well, now that you have children, you probably understand. It’s not just about what you say, it’s the way you say it as well. We can all relate to this now, especially if we talk to other adults. This mom-ism has trained us to recognize when someone might be dishonest or ungrateful in their tone, which is a very valuable lesson.

“Don’t make me turn the car around/tell you again/come there” and all those vague warnings we’d often get from our mothers as children. It wasn’t so much about what you were doing – it was the fear of the consequences that would cause you to shape up, right? You’ve got to admit, it’s probably something you’ve used with your own kids, at least once.

Moms can sometimes be cranky, angry, and a bit scary, but we still love them nonetheless – and when we become moms ourselves is when we can relate to them most! Immense props to mothers everywhere!