The Optimist, The Pessimist, and The Realist.

These are the three types of thinkers there are in the world, even if some do not seem to engage their brain at times! So now we know what types of thinkers there are, how do each of the types think? Is life just full of roses, you little Positive Thinker? Is “the end” nigh, doom and gloom Negative Thinker? Or are you centered on reality and act accordingly to the stimuli that surround you, Realistic Thinker?

Grab the popcorn and let us take an in-depth look at the how the different title roles act in this  concise preview, not that we are trying to be spoilers before release.

Which Type of Thinker Are You? 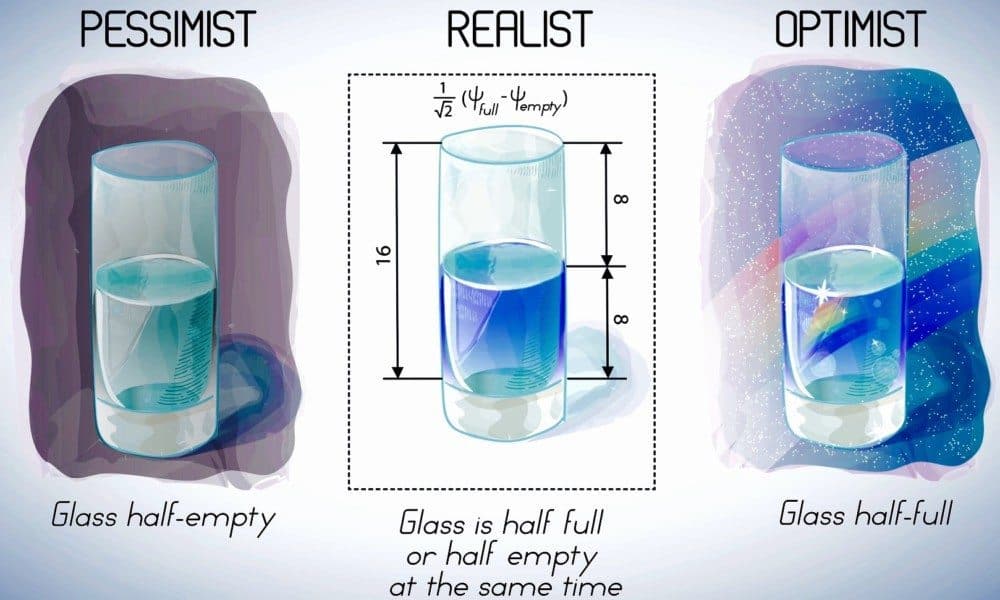 Definition- Disposed to take a favorable view of events and expect a positive outcome.

The soundtrack for the Optimist is Bobby McFerrin’s Don’t Worry Be Happy, and lives by the lyrics. They are the ones who see the good in anything, despite the negative things that happen in life. Out of a fortune of $10 million, when they lose $9 nine million in the stock market, they are happy that they still have that $1 million. Everything is fine and has a solution. If there is no solution, so what? They just dance away like McFerrin, Robin Williams, and Bill Irwin in the music video and money will come naturally.

Definition- Has a tendency to see only bad or undesirable results or conditions.

The soundtrack for the Pessimist is Travis’ Why Does It Always Rain On Me? They always assume the worst thing is going to happen, even though ninety-nine times out of a hundred it does not. Out of the same $10 million fortune, the Pessimist bemoans the loss of the $9 million instead of taking comfort in knowing that they still have $1 million left. These people are as gloomy as the British sky in this music video and situations are stuck in a dark cloud of negativity and despair, with fear of losing the remaining money consuming this poor person.

Definition- A person who tends to view or represent things as they really are.

The soundtrack for the Realist is definitely the Dr. House intro, the Singaporean version. Clinical, no lyrics, just clean, neutral music – just like the doc himself. This type of thinker is a “matter of fact” one based on the reality of the situation. They lost $9 million, and $1 million remains. If there is a problem, there is a solution. In this case, an investment off a percentage of the remaining capital and the rest is for a rainy day.

Whether The Wolf of Wall Street or A Nightmare On Elm Street, perception is everything in life. These perceptions shape your life in that same way, desired or not. Here is a quote from the creator of well-known characters such as Mickey Mouse and Cinderella, Walt Disney: “I always like to look on the optimistic side of life, but I am realistic enough to know that life is a complex matter. With the laugh comes the tears and in developing motion pictures and television shows, you must combine all the facts of life – drama, pathos, and humour.” It is fair to say that Disney never played Devil’s Advocate for the joys of being the Pessimist.

How do you and the people around you star in your movie? Does the screenplay look good or do you need to cut and go to Take 2