What if you could see exactly where you feel certain emotions in your body? Well, now you can! Enter heatmaps. A study performed by scientists in Finland shows how and where we feel emotions within our bodies, which could have implications on the treatment of mood and emotional disorders.

“We often think the emotions are something that happen only in the mind, but there’s also lots of evidence suggesting that they also happen in our bodies,” says lead author Lauri Nummenmaa of the Aalto University School of Science in Finland in an interview by NPR.

The study was published in the Proceedings of the National Academy of the Sciences and consisted of five experiments that included 701 participants. Researchers showed them two silhouettes of bodies on a screen and asked the volunteers to think about one of 14 different emotions, including love, anger, pride, sadness, etc.

Here are what some of the emotional heatmaps look like: 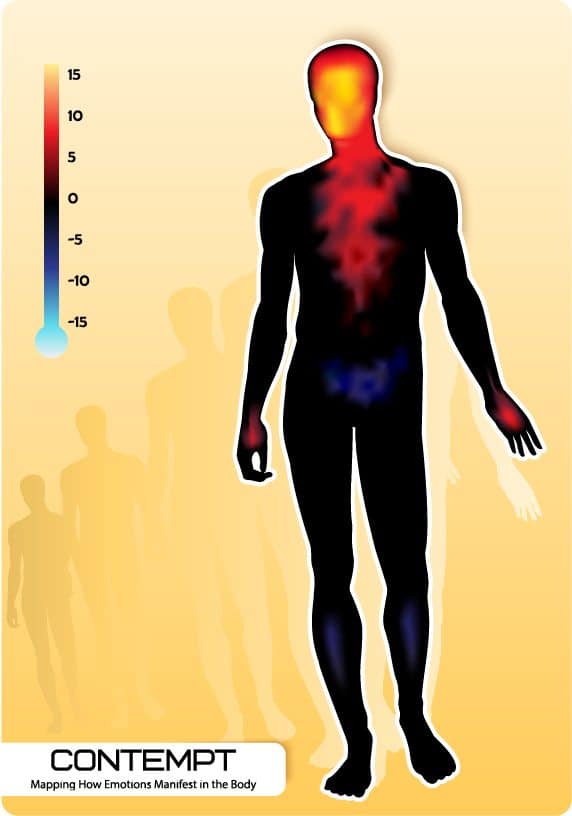 Contempt mostly activated areas of the head, neck, and chest, while the rest of the body remained neutral. We can speculate that since contempt means looking down upon someone or feeling that they’re beneath consideration, this boosts our own ego, which literally can get to our head if left unchecked. 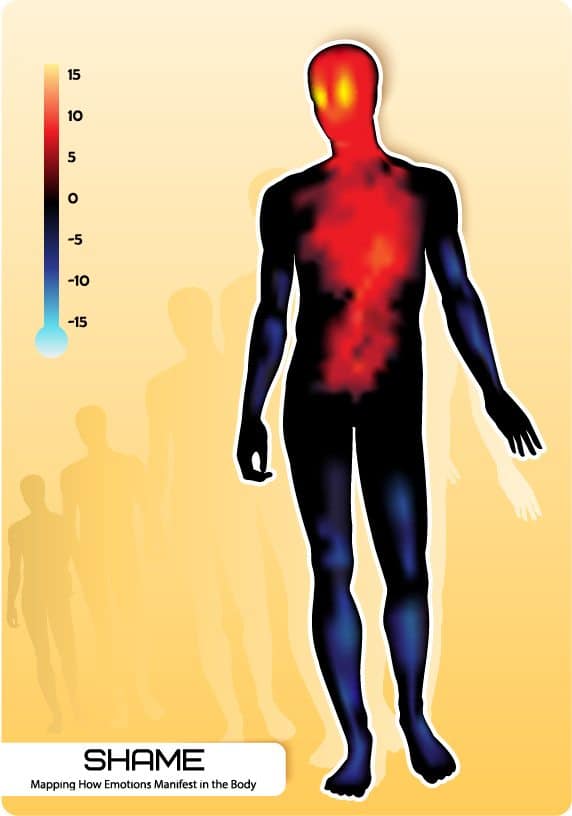 Shame caused much of the same areas to become activated as contempt, though emotions were felt a bit lower in the abdomen. Interestingly, people’s emotions became deactivated in the lower legs. 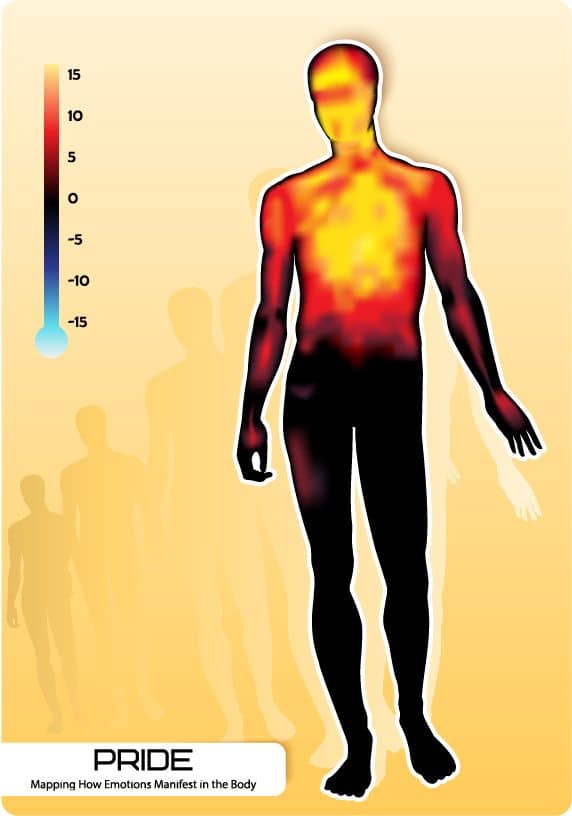 It’s no surprise that people reported feeling pride in their upper body, specifically in their head and chest. Pride is a positive emotion and releases feel-good chemicals throughout the body. 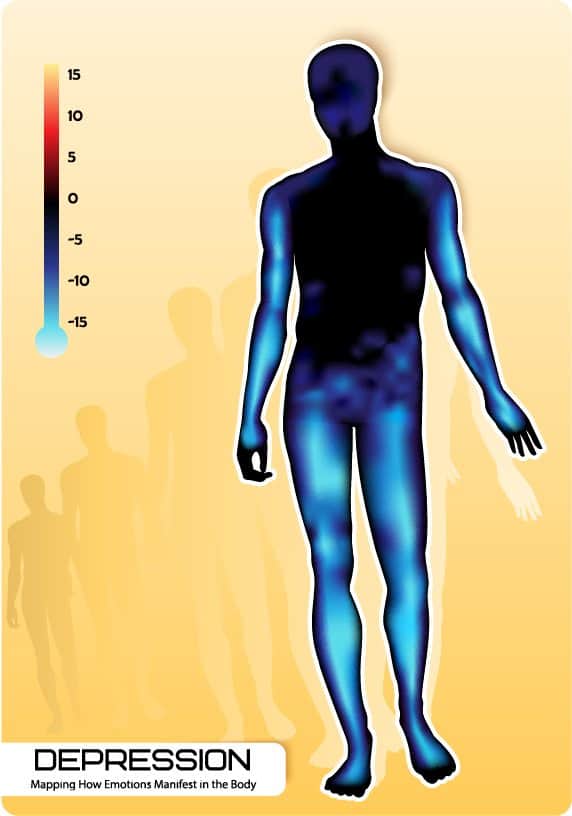 It’s also not a surprise that people reported decreased activity in the body when depression came to mind. Depression has a numbing effect on the body and looks virtually opposite of love and happiness on heatmaps. 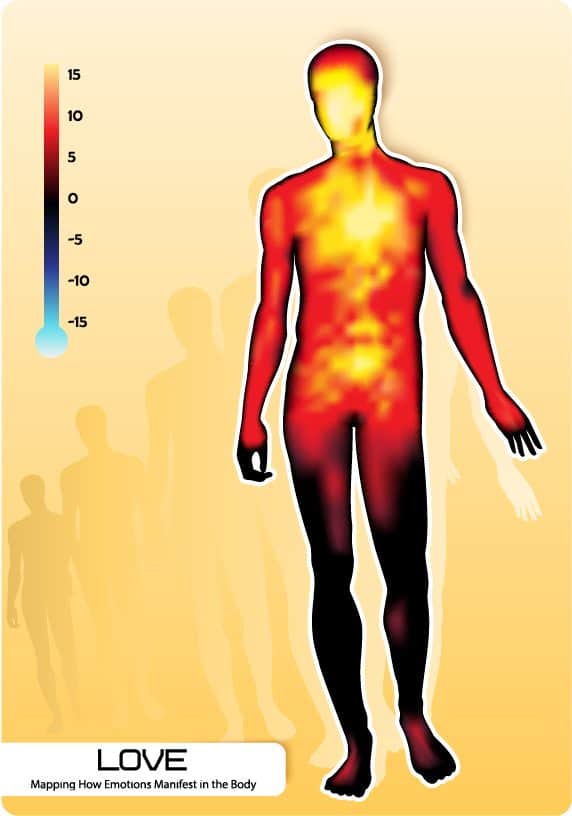 As we said before, love causes the whole body to light up with positive emotions, because it’s such a powerful feeling. People reported the most activity in the head, chest, and lower abdomen (maybe this has to do with “butterflies!”) 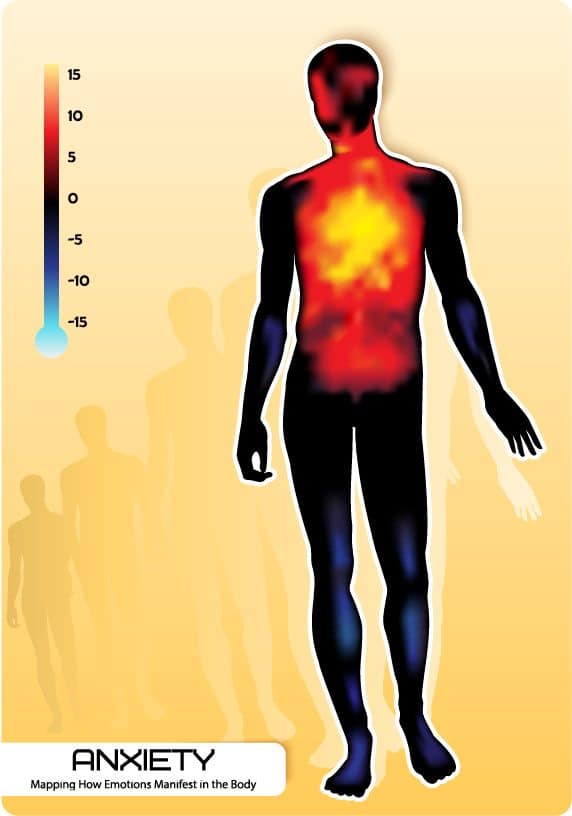 We hate to end on a sour note, but anxiety is an important emotion to discuss. According to the heatmaps, anxiety was felt mostly in the chest. This makes sense because our hearts speed up greatly when we sense a threat, whether real or perceived.

For a quick recap, happiness and love increased activity across nearly the whole body, while depression decreased activity, especially in the arms, legs and head. Sadness also had a numbing effect, though not nearly as pronounced as depression. Danger and fear triggered strong reactions in the chest area, which makes sense because the fight-or-flight response speeds up our heartrate in response to a threat.

The authors stated that the results showed consistency across cultures, indicating that the heatmaps represent universal biological responses.

“Our data show bodily sensations associated with different emotions are so specific that, in fact, they could at least in theory contribute significantly to the conscious feeling of the corresponding emotion,” said Nummenmaa.