There are a few things that fit the bill of fascinating, thought-provoking, and frightening. Death is one such thing.

Since the dawn of mankind, human beings have pondered the question “What happens after we die?” When you stop and think it, you quickly realize there are only two possible answers: something or nothing.

Of course, religion adds some nuance to the abovementioned question, but that’s pretty much it. Either something happens, or nothing happens. Either we are matter to be disposed of and recycled – or we aren’t.

Which one is it?

Well, if you were to ask Dr. Stuart Hameroff, something happens – and it involves consciousness.

“I believe that consciousness, or its immediate precursor proto-consciousness, has been in the universe all along, perhaps from the big bang.” ~ Dr. Stuart Hameroff, MD

Scientists Reveal What Happens To Your Soul After Death

The word ‘consciousness’ is defined by the Oxford English Dictionary as:

Predictably, consciousness – like death – is heavily debated. Some believe that consciousness is the direct result of brain activity. Others think that outside forces, e.g., the ‘Universe,’ ‘God’ – and internal elements, e.g., the ‘Spirit,’ ‘Lifeforce,’ ‘Mind,’ etc., contributes to our state of being. 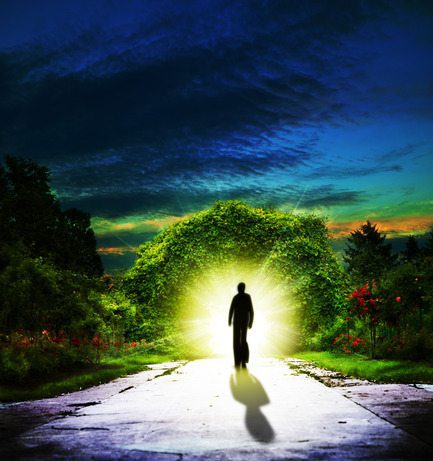 Dr. Hameroff oversees the Center of Consciousness Studies at the University of Arizona and has spent the last 50-plus years exploring consciousness as it relates to the field of quantum mechanics.

Quantum mechanics is “a fundamental theory in physics which describes nature at the smallest scales of energy levels of atoms and subatomic particles.”

To explain just how essential quantum mechanics is to the perception of reality – and to Hameroff’s theory– let’s quickly talk about where it all began: The “Double-Slit Experiment.”

Every quantum physicist is baffled by the double-slit experiment. And they have good reason to be –it defies natural law.

Here’s all you need to know about the experiment:

– Photons, as researchers predict, form an ordered pattern on a wall. (To help you visualize this, imagine two vertical lines filled with little ‘pellet protons’ shooting onto a screen.)

–  When an observational device (a detector) detects which protons go through which slit, no pattern emerges (no more vertically-aligned pellet protons).

– In other words, human observation (via a technical apparatus) alters the pattern.

– The predicted energy pattern, as should be decided by natural law, instead produces no pattern whatsoever.

Anil Ananthaswamy of New Scientist – in a piece called “Classic quantum experiment could conceal theory of everything” explains the experiment and potential ramifications:

“Our classical view of the world suggests that photons of light should pass through one slit or the other, and thus create two parallel bands on the screen behind. But instead, the light spreads out onto alternating bands of light and dark … (the) iconic physics experiment may be hiding more than we ever realized about the nature of reality.”

What do the human mind and the Universe have in common?

(1) We know relatively little about them.

(2) Quantum vibrations are found in both.

While the phrase “correlation does not imply causation” is played on a loop within the scientific community (for a good reason, BTW), there is no denying the relationship between the human mind and universe.

But what is that relationship, exactly?

In 1996, Dr. Hameroff and Roger Penrose, mathematician and physicist, proposed the orchestrated objective reduction theory of consciousness, or the ‘Orch-OR’ theory.

According the Orch-OR theory, consciousness derives itself from tiny protein structures within the brain called microtubules.

On a physiological level, microtubules are the cell’s “conveyor belts.”  They transport cellular resources and materials. Microtubules are also involved in cell division and the structuring of cells.

“The origin of consciousness reflects our place in the universe, the nature of our existence. Did consciousness evolve from complex computations among brain neurons, as most scientists assert? Or has consciousness, in some sense, been here all along, as spiritual approaches maintain?”

Hameroff and Penrose answer their own rhetorical question:

“… our theory accommodates both these views, suggesting consciousness derives from quantum vibrations in microtubules, protein polymers inside brain neurons, which both govern neuronal and synaptic function, and connect brain processes to self-organizing processes in the fine scale, ‘proto-conscious’ quantum structure of reality.”

Bear in mind that the duo published their findings over twenty years ago. Since then, numerous technological advances (e.g., brain imaging and observational apparatuses) have taken place which appears to support Hameroff and Penrose’s theory.

The law of conservation of energy, resoundingly accepted by scientists, states that “energy can neither be created nor destroyed.”

Energy, however, can change forms.