We adults aren’t the only ones who struggle with fear and worry – children do, too. Therapists say that child concerns tend to differ according to age groups, or stages of development.

“Why do kids worry?”

As any parent can attest, children vary in temperament. Some babies are more relaxed, while others are more anxious; some are criers, some are not, and so on.

Anxiety is really only an issue if it interferes with a child’s cognitive, emotional, or social development. (It can be hard to detect this behavior, so if you notice subtle clues, seek the expertise of a psychologist or doctor.)

Come to think of it, why do children worry, anyway? It’s the simplest time of life, right? It’s all brain-related, folks.
(And think about it, did things seem all that simple when you were a kid?)

Short and sweet, children are anxious because of the pace at which their brain develops. During this time, the child is absorbing – and trying to interpret – a vast amount of external stimuli, i.e., the environment of people, places, and things.

To complicate matters, the ability to cope with anxiety and worry doesn’t develop until after adolescence. This is why a child – even a teenager – may throw a tantrum, because they feel the frustration of not being understood.

In short, fear of the unknown is a very natural part of growing up. It is hardwired into a primitive part of the brain, called the amygdala. The brain also grows fastest from age 0 to 6 than at any time in life, which is a double-whammy for the whole anxiety thing.

“What do kids worry about?”

A child doesn’t begin to express thoughts and feelings until about age three. Usually, it isn’t until around the age of 8 that they’re able to do so with some coherence. So, it’s natural to be curious about what’s worrying your kid!
(Just try not to over-worry, hard as that may be.)

Important note: If you suspect that your child’s anxiety may be interfering with their cognitive, emotional, or social development – a potential psychological disorder – please seek the advice of a child psychologist or therapist.

– Being separated from their parents.

Here’s why: Until around 8 to 10 months, babies believe that what is temporarily gone just vanishes. For example, when you step out of the room, your golden child thinks you’re, well, gone forever! Then, they wise up to the fact that you’re somewhere – and begin to feel the fear of separation. They love you, after all!

Here’s why: The baby brain is super sensitive to information (and sensory) overload. A loud noise (or ‘startling’ sensation) will send their delicate brain into high alert.

Here’s why: When your little one begins taking their first steps (a beautiful thing!), they start to get the wonderful feeling of independence! They feel an ever-increasing need for control over their environment. Anything that seems outside of their control (say, a honking car or burst of thunder) can seem frightening. 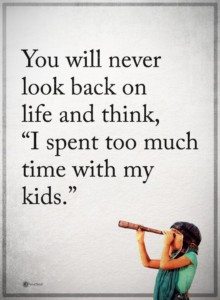 – Fear of the dark/being alone at night

Here’s why: Preschool-aged kids have a hard time separating fantasy from reality (do you see all these Batman and Superman costumes?) Anyways, if a child associates darkness with something scary, they’re likely to come crawling into your room at night.

Here’s why: If there’s a common theme developing, it’s this: kids aren’t comfortable with the unfamiliar. A large man in a red costume, bushy white beard, and a weird-looking red hat isn’t going to impress them much. In fact, they’ll probably not like it … at all.

Fear of strangers, the dark, being alone, and other things outside of their control pretty much dominate your child’s worries until age 6 or 7. Then, kids start fearing these things until around age 11 or 12:

Here’s why: While much older by comparison, young kids still question their ability to cope in an uncertain world without their Mom or Pop. Oh, and the wonderfully-vivid imagination may just creep around the corner (*pun intended*).

Here’s why: Kids are coming to grips with the fact that it’s a big world out there – and they’re, well, worried. Deeply entrenched in our subconscious is the knowledge that we’re, by nature, social animals. Rejection by one’s kind is rarely a welcome (or healthy) development.

– Something bad happening to those they care about

Here’s why: Kids start to understand – at some level – that death is inevitable. As such, they may begin to ponder something serious happening to someone or something (a pet, for example) that they love.

Adolescents (Ages 12 and up)

Here’s why: Adolescence is when we start asking the question “Who am I, and what am I doing here?” At this age, kids begin to fully grasp the importance of social interactions as they transition from a family-based support system to a peer-based one.

– Their grades or performance

Here’s why: Adolescents begin to comprehend the consequences of failure – and this may breed a bit of fear. Kids who are achievement-oriented will especially be hard on themselves following a bad exam score or poor outing on the playing field.

– Opening up to you

Here’s why: As mentioned, adolescents understand – at least, to some degree – the importance of establishing some independence. Combine this knowledge with the fact that adolescence can be downright unforgiving (thanks, hormones!), and you may have a child in conflict with themselves.

Of course, the best thing we can do as parents is to reassure that we are always there for them calmly. No matter what.