Washing your hands is one of the best ways to prevent the spread of disease and practice good hygiene. In highly populated places, such as schools and hospitals, washing hands and keeping clean becomes vitally essential to keep infections at bay. Here are some statistics from the Centers for Disease Control and Prevention that show the importance of washing your hands:

A teacher proves this point

Speaking of elementary schools, Jaralee Metcalf, a behavioral specialist from Idaho Falls Elementary School, wanted to show her students the importance of washing their hands. She came up with a clever experiment. She proved to the kids first-hand how washing their hands could reduce the spread of germs and help everyone around them be healthier in turn.

At the start of winter, when the flu season typically begins, Jaralee realized how tired she was from getting sick. She knew that working around children would inevitably expose her to germs, but she wanted to show her students how washing their hands could reduce contamination.

To explain how bacteria spread and why the kids needed to wash their hands thoroughly several times per day, Jaralee came up with a test. She asked several students with various hygiene levels to touch five pieces of white bread taken from the same loaf at the same time. They put the slices of bread in different bags to study how the bread would look after one month.

Details of the experiment

The first piece was wiped on all the classroom Chromebooks. The second one used as a control – it wasn’t touched and was promptly put into a bag. The third piece of bread was touched by the entire class who hadn’t washed their hands and placed in a bag labeled “dirty hands.” The fourth piece was touched once again by the whole class, but only after they had washed their hands with soap and water. For the final piece of bread, the class used hand sanitizer and then touched the piece of bread. 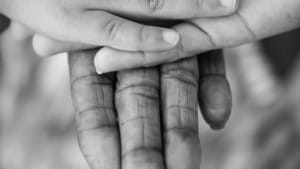 Obviously, the laptop slice looked the worst out of them all, but the school hadn’t sanitized the laptops (which they normally do) before the experiment. However, this shows how easily germs can spread when people don’t regularly wash their hands.

The dirty hands slice still looked pretty disgusting after one month, but not nearly as bad as the Chromebook slice.

The only slice of bread that didn’t show bacteria growth was the fourth one. This clearly shows the importance of washing our hands!