Having a stroke is a serious life-changing event whose long-term repercussions can last from months to years. A stroke is like experiencing a fire in the brain making it vitally important to understand that the more rapid the response to aid someone having a stroke the more of the person you can save.

However, signs of a stroke can be experienced differently between men and women, and even between age groups. A stroke is a wake-up to those who experience it, and there’s only a short time once a stroke has started to lessen the long-term damage.

However, many don’t understand what the warning signs of a stroke between different genders. A stroke operates in two different areas depending on the area affected.

Signs of a stroke

Ischemic stroke – occurs when the blood supply in the brain shuts down.

Hemorrhagic stroke – occurs when brain blood vessels rupture allowing blood to collect in the spaces between those cells.

A stoke can lead to permanent damage such as partial paralysis, long-term memory loss, and speech impairment. While stroke is more common in women, a man’s health can also remain negatively affected for some time after the event. Strokes are one of the leading causes of death in the United States, and many people worldwide will experience a stroke in their lifetime making it vital to understand the warning signs of a stroke across genders and ages.

The way strokes present in women

These types of unique female symptoms are more challenging to detect because they aren’t always noticeable as stroke symptoms.

Male stroke patterns are generally quicker to spot than in females. However, men are often the least likely to be able to spot signs of a stroke in men. Having a stroke can be common across all male racial groups such African American, Native American, Asian and White Men. In general, men more often experience transient ischemic attacks (TIAs) or ‘mini-strokes’ before a potential complete stroke occurs. Signs of a stroke in men often manifest as brain dysfunction including: 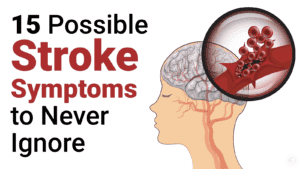 The lifetime risk of a stroke is lower in men than for women with general positive recovery outcomes. Men are also less likely to experience long-term disability after the event.

There is life after a stroke

Understanding how strokes operate across genders can make all the difference in how to handle its potential long-term effects. A stroke can occur across all racial and gender groups making continuing research and understanding the conditions of its varying symptoms important front-line tools in lessening its negative effects.

Men and women present symptoms of a stroke differently making it especially important to understand those differences. An ounce of prevention is with a pound of cure, so if you’re at risk from a stroke be sure to include healthy changes into your life that can help prevent a stroke. Such changes could include:

There is life after a stroke, and knowledge backed by understanding will continue to save lives from a worldwide killer.