Attraction and love are two very different things. And, believe it or not, it isn’t always apparent to someone when they love another. Is it love – or something else? Are they a crush? A fling? What are the signs?

The typical answer to all of the above questions: “You know when you know.” The problem is that this answer, though quaint, is– categorically untrue – at least for some of us. The main reason for this is – and this is a crucial point – that “people vary in the extent to which they know and can distinguish between their own emotions.”

The question then becomes: “How do I know if what I’m feeling is love – or something else?” Enter our old, and (mostly) reliable friend, science.

Loads of research on love and relationships helps provide a “science-y” glimpse into what distinguishes love and “other emotions” – like attraction – for some of us.

So, what does the science say about what separates love from “other stuff”?

Here are five signs that you’ve found that special someone – and not just “eye candy”:

1. You’re Always Looking At Their Face or In Their Eyes

Eye gaze is a powerful indication of romantic feelings and is a principal differentiator between lust and love. When in love, experimental studies demonstrate that one’s visual attention focuses more towards the other person’s facial features – including the eyes.

Someone in the clutches of lust, meanwhile, focuses their gaze toward the body – which is unsurprising given that “body-gazing” dominates visual attention both before and during sexual intercourse.

When in love with someone, we’re all-too-willing to help at “the drop of a hat.” Personal sacrifice and love are often integral components of a couple happily in love.

Psychologists call these sacrifices “costly commitment signals,” defined as “behaviors that require substantial sacrifice, perhaps in time, emotions, or financial resources – e.g., driving a partner to an appointment or giving a gift.”

In contrast, the lack or absence of “commitment signals” in a relationship is an indication or either (a) lust, or (b) apathy. Either way, love is almost certainly not present. 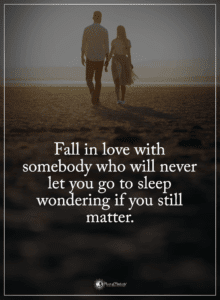 The words one uses when describing a mutually-affective situation is typically an accurate gauge of how they feel towards that person. So, if you’re unsure about how someone feels about you, pay attention to their words – particularly words and phrases they tend to repeat.

Getting a bit more language-specific, plural words such as “we,” “us,” or “our” tend to be used more with someone we love. Singular words like “I” or “me” are generally used less. Context matters in such situations, however. You’ll notice that these words are often used scenarios involving resources (e.g., “our stuff,” “we bought,” etc.)

To illustrate, here’s a personal example: This writer found himself using the words “our apartment” as opposed to “my apartment” as the relationship with his girlfriend progressed.

4. You’re Okay With Some Dependency

Before we delve into the fourth sign – here’s a caveat: personality matters, a lot.

We’re all familiar with two general personality types: introversion and extroversion; the former requires much more alone time than the latter, even in romantic relationships. (However, both typically need less alone time before experiencing love.)

Such “qualifiers” aside, evidence shows that people who are “highly motivated to increase closeness – like those who are in love – no longer hold negative views of dependence when it comes to their love interest.”