An experimental medical procedure is being tested to transform negativity in the mind into positivity. Two separate groups of patients are told the success to failure rate before they decide to partake in the procedure themselves. The participants of group one are all excited and ready to undergo the procedure after their doctor assures them there is a 70% success rate, great! However, patients in group two refuse to participate. How could this be? Group two was given the same information as Group one. The doctor made it clear that the procedure has had a 30% failure rate. Both parties are fully aware of the risks involved, so how could the two groups differ so greatly in their number of willing participants?

The truth is, there was a difference. What was group one’s simple trick to achieve positivity? The information the groups heard was in fact the same information. However, one group was told this information in a positive frame and the other in a negative.

Although there is no medical procedure that will make our thoughts positive, there are simple ways to transform negativity into positivity.

We will go over 5 simple tricks that will turn all negativity in our lives into positivity.

Disclaimer – simple is not the same as easy. Negativity is easy; we must choose to be positive. We are not dreamers here. Indeed, we know this can be a tough choice to make.

Write down the quotes about positivity you think of late at night. The quiet hours of the night, free from distractions are no longer spent counter intuitively, forcing ourselves into sleep. They are spent engaging in meaningful reflection. We need this time for ourselves, let’s not waste it obsessing over the day that has passed. Let us dream towards the day to come. Let’s read positivity quotes for the fun of it. Let’s write down what we want our life to be like in 5 years. 10 years, 20. Now, how do we get from point A to point B? 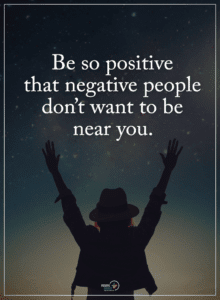 Don’t start tomorrow,  next week, or next month. Positivity is a habit. Habits form whether we want them to or not so, now that we know what we want, we must set our minds to achieving it. If we put off what we want until tomorrow, we have officially begun the habit of waiting until tomorrow. If we begin to view the positive frame right now, we have officially begun the habit of being positive. It is just that simple.

3. Accept failure and move on

We will not be the person we want to be in 5 years tomorrow. We need time and chances to fail.

“Nobody’s perfect, so give yourself credit for everything you’re doing right, and be kind to yourself when you struggle.” -Lori Deschene.

“Perfectionism may look good in his shiny shoes but he’s a little bit of an asshole and no one invites him to their pool parties.” -Ze Frank.

4. Comparing ourselves to who we were yesterday

The quotes about positivity we write to ourselves are going to help here. Some people seem like they were born to be happy. Others seem like they have it all. We are all afraid to show the world our scars, even the happiest among us have a few hidden away. Everyone is on a different part of their own difficult journey through this life. Let’s remind ourselves that we can’t compare our lives to others because we don’t know anyone else the same way we know ourselves.