That picture you see here comes from what was one of the most ancient symbols known to man. That symbol is based on the ancient Olympic 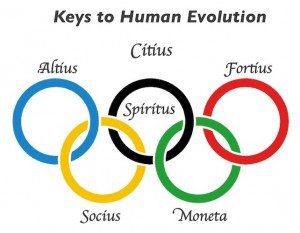 symbol, which was a five-pointed star with five words around it at each point. Today’s symbol of the Olympics has changed to the five rings as we all know it. However, they dropped two of the words. Those two words are important pieces of the original five.

The Meaning Behind the Symbol

The ancients related the five-pointed star to the human body. When we stand with your limbs out, you see we are shaped like the star with five points – or aspects. That symbol and the words around it were based on the perfection of the human experience.  Those words in Latin were Citius, Altius, Fortius, Socius & Moneta.

Moneta was the ancient word for Trust. It’s trust that in relationships gives us our foundations or our legs to stand on, in our relationships, our families, communities, and throughout the world.  Most people don’t realize that today’s word for trust is where the word money came from – moneta became money. Money literally means the trust of relationships.

Our ancestors realized an important fact. When trust is broken, you can heal it by learning to forgive, forget, and erase it from your memory. We don’t learn these things in a classroom today. And here’s another example. They used to target specific issues with certain types of foods to allow the emotional molecules to escape from the body. But as I said earlier, they no longer teach these concepts.

In the ancient world they would chose elements to symbolize things. For example, each planet was given an element to represent it.  The moon was silver, mercury was mercury, the sun was gold, and so on.

Trust is Golden to a Human

They looked for an element that would represent human trust, and also the trust of communities and nations. They eventually chose gold. And this was because they knew that gold turned purer when fired. In turn, it became even more valuable, and they knew that trust was like that.  A relationship that has never been tested oftentimes is not as valuable as one which has been and has solidified back together into a new strength of understanding. 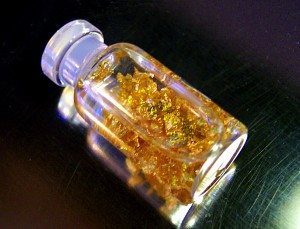 These ancient people realized that gold could only be found where water existed… or once existed. The gold nuggets would deposit in the banks of the river. So when they built the buildings to house the gold that would represent the collective trust, they called them the banks as that’s where we deposit the gold just like nature does.

If you look at all of the languages of money or trust as it was known, it sounds just like you’re talking about water because that’s where gold was found. That’s why we have currency, float loans, capital gains, liquid assets, trading pools, cash flow and so on…

There are over 50 words dealing with money at the international level of what we call banking today that sounds just like you’re talking about water.

So looking at that symbol and why I designed it into our logo was because we don’t believe that fitness is just a physical thing. To be truly healthy and fit you need a balance of the 5 aspects. That’s because these represent the perfection of the human experience as taught by our ancestors.

So as we delve a little deeper, we hope to empower you with some information so you can bring lasting health into all areas of your life.