According to the CDC, an estimated 50% of Americans will get diagnosed with a mental disorder at some point in their lifetime. Let that statistic sink in for a second. That percentage is staggering, to say the least, and represents only a portion of people suffering all over the world.

Over 300 million people globally have been diagnosed with depression, which is also the leading cause of disability worldwide. Between 2005 and 2015, the number of people living with depression increased 18%. Mental illnesses are also the third most common cause of hospitalization in the U.S. for people 18-44 years old.

There is something clearly wrong here, as mental illnesses seem to be increasing all across the board. We could write a whole book on the causes of depression, but in this article, we’re here to bring you remedies for it. Keep in mind that the treatments we will go over are all natural, prescription-free ways of alleviating depression; however, we do not encourage people to go off of medication without first consulting with their doctor.

With that being said, let’s get into some natural ways to get rid of (or at least manage) depression.

You’ve probably heard this one many times before, but we will continue to say it because exercise is one of the best ways to treat both depression and anxiety. It’s a natural stress-reliever, mood-booster, and health-enhancer. Most psychologists recommend some sort of aerobic or weight training exercise for at least thirty minutes, three times per week. Regular exercise can literally rewire the neurotransmitters in your brain and raise serotonin levels.

Many people who struggle with depression do not produce enough serotonin, which helps you feel relaxed. Enter exercise, which helps minimize stress and release other feel-good chemicals that produce an overall feeling of well-being. 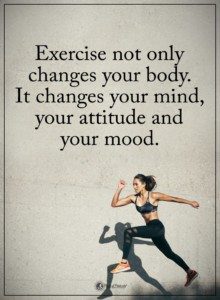 2. Have a mindfulness practice.

You can simply google “meditation research” and find countless studies about the benefits of it for human health. In fact, a team of researchers from Johns Hopkins University in Baltimore, Maryland, found that just thirty minutes of daily mindfulness meditation could treat depression just as effectively as antidepressants. Some studies out there claim that meditation actually rivals antidepressants as a form of treatment for depression. Mindfulness meditation in particular teaches you to get more in tune with your body and mind, and become a quiet observer of yourself. It helps you slow down, focus on your breathing, and quiet your thoughts.

In addition, researchers have found that meditation helps quiet nerve receptors in a part of the brain known as the default mode network. Many studies have linked depression and anxiety with high levels of activity in this area of the brain. If you are a beginner to meditation, try starting out with ten minutes a day, and put on relaxing music or a guided meditation to help you stay focused.

(Editor’s note: Talk with your physician before taking St. John’s wort if you are currently on any medication).

You can find this natural herb in a variety of forms such as capsules, teas, and extracts such as essential oils. For centuries, people have been using St. John’s wort to treat nervous system disorders like anxiety and depression. While researchers are still studying how St. John’s wort impacts the brain, many scientists have found that St. John’s wort rivals antidepressants for treatment of mild to moderate depression. Similar to standard SSRI’s, or selective serotonin reuptake inhibitors, St. John’s wort increases serotonin levels as well as other feel-good chemicals such as dopamine.

Called cognitive reframing or restructuring in psychology, this is a very powerful technique that is taught in CBT, or cognitive behavioral therapy. Basically, you take negative thoughts and reframe them into something more positive. Our minds default to negativity because we have evolved to pay more attention to bad things for our survival, but this doesn’t help us much in the modern world. So, any time you have a negative thought, ask yourself these questions: