Here is a universal truth: we make things much too hard on ourselves. The fact of the matter is that each of us is responsible for how we feel about life. Will we approach life with a load of stress and a heavy heart? Or will we “stay light” and carefree until the Universe calls us home? You may want to be carefree, but just don’t know how to simplify your life.

Contrary to what the bottomfeeders of media would have you believe, money and possessions (“more stuff”) doesn’t make you happier or more content. More stuff complicates things, and complexity is, literally, the antonym of simplicity. Here’s just one of the countless examples: In an 8,250-person study, researchers at Oxford Economics and the National Center for Social Research in the UK found that sex, sleep, and good relationship with loved ones are much more important to good health than exotic living.

“The ability to simplify means to eliminate the unnecessary so that the necessary may speak.” – Hans Hofmann (source)

Despite mountains of evidence, we continue to strive instead of thrive. Research informs us that 62 percent of people say that money is a “common source of stress,” and 61 percent say the same of their work.

Don’t judge or criticize yourself either – it only adds to the problem. The vast majority of people have a difficult time finding balance in this hectic world. However, you can (and are) doing something about it by reading this article. Kudos to you!

“As you simplify your life, the laws of the universe will be simpler; solitude will not be solitude, poverty will not be poverty, nor weakness weakness.” – Henry David Thoreau

Those who simplify their lives have one thing in common: the need for freedom. Freedom from clutter, freedom from debt, freedom from too much stuff, and freedom from worry. Above all, simplifying your life leads to Freedom of Mind.

Simplifying your life is all about shedding the unnecessary to focus on the things that honestly matter. And who doesn’t want that?

To give you some ideas, here are ten ways that you can simplify your life, right now:

Clutter is a distraction; it’s an energy vacuum. Look at your desk. See all of that random stuff just scattered about for no reason? Organize it. Store it all inside a drawer (though you’ll probably find you never need to open it). If it’s something you may need later, put it away until that time comes. If it’s garbage, throw it out.

Mental clutter is just as real as the physical. What has been rattling around in your noggin that needs to come out? Write it all down to simplify your life. Mental clutter drains your energy and increases stress. Writing stuff down in a personal journal or notebook will free up your cognitive reserves and help lighten your mood.

Most people, especially those in the West, buy way too much useless junk. How many things have you bought, used for a few days, and never picked up again? Buying stuff with little to no utility is not only unwise, but it is also harmful. First, you’re spending money that could otherwise go towards something with value (or better yet, saved). Second, you’re reinforcing the unconscious notion that “more is better” when this is not the case.

One reason why so many people overspend and accumulate “things” is that they’re not clear on what’s important in their life. Otherwise, why would you invest your time, money, and energy? Think about those things that matter to you – things that you want to invest time, money, or energy in – and get rid of everything else.

Meditation has been shown to shrink parts of the brain that are responsible for fear and negative emotion.  Moreover, mindfulness meditation appears to thicken the pre-frontal cortex (PFC), the area of the brain that makes decisions and plans, and which allows us to pay attention and concentrate. 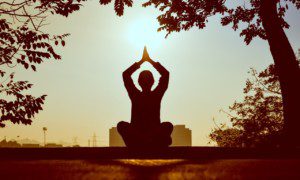 Yes, our laptops, smartphones, and iPads can help make our lives easier. The problem (and it is a problem) is that we’re becoming more distracted and less mindful. The adverse effects of the overuse of technology are well-documented, and include: