Not every person you meet has good intentions. That’s a fact that many people find out only too late. It’s a common problem within humankind. Everyone from the rich and famous to regular folks face this within their lifetime.

“Sweetie, if you’re going to be two faced, at least make one of them pretty.” – Marilyn Monroe

The late Marilyn Monroe was a beautiful, gifted actress and model; and, as it turns out, quite insightful about the personal manipulation she almost assuredly experienced during her ever-present, adored existence. Ms. Monroe possessed the beauty, allure, and, yes, fortune, that screamed: “Take advantage of me!” But, despite her infamous reputation for playing “dumb blonde” characters, she was an astute judge of character. In fact, she was downright intolerant of those that vainly attempted such. Reportedly, she quickly disbanded those with ulterior motives.

Oh, and the “dumb blonde” reportedly had an IQ of over 160. We digress, however. This article is not about Marilyn Monroe. None of us are Marilyn Monroe, and 99.999 percent of us will never come close to achieving the fame and fortune of this intelligent and beautiful woman.

We do, however, share one thing in common: we’re all potential victims in the eyes of manipulators.

They’ll smile and speak innocently, all the while making a deliberate attempt to deceive and control our very minds. Unfortunately, these manipulators all too often get their way.

So, what is the solution? It’s complicated, yet simple: we must remain keenly aware of those around us, while never hesitating to take the appropriate action.

We’ll discuss 5 signs of an all-too-common type of manipulator: a “nice person” with diabolical intentions.

Here’s the 5 signs a nice person secretly has negative intentions: 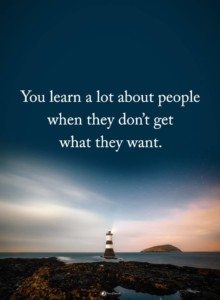 1. Conversations are always one-sided if someone has cruel intentions.

No surprise here. Nice people with cruel intentions are programmed to dominate discussions. Ordinary people, while some may lack active listening skills, will at least attempt to engage in a dialogue. Manipulators of this type are not to be considered ordinary people as it pertains to human conversation.

Here’s the caveat. If the manipulator senses a failure in their conversational tactics, they’ll devise some other method of achieving their aims. In some cases, such tactical diversion is a sudden, inexplicable interest in your life and “what’s going on” with you.

Make no mistake, such enigmatic behavior has an explanation: they’re selfish and manipulative. Manipulators are so self-focused that, eventually, the dialectical spotlight will shine back onto them.

2. A person with cruel intentions may keep repeatedly making demands

Another talent manipulators of this type possess is the ability to wear you down. As an individualistic person of the highest degree, they’ll constantly reiterate – often in a subtle nature – the action that they wish you to take.

They’ll make demands incessantly. Why? Because their reassuring ego convinces them that their “superior” methods, however ill-conceived, will prevail over their target’s sense of self-control. Don’t allow this to happen. Challenge their words while adamantly refusing to participate in their game.

You’ll win this battle every time, but only if you’re strong enough.

3. Using persuasion as a game

The third on this list relates to the second; as dialogical maneuvers are a favorite tool of manipulators. Similarly, manipulators of this variety have a penchant for persuasion, and whether or not such diversions are effective is irrelevant. They think they are, and that’s all you need to know about such motives.

Persuasion and pressure can be potent weapons, especially when the victim lacks aptitude in discernment. Also, people who have trouble saying “no” can fall victim (sometimes knowingly) to such persuasion.

Use your best judgment, and – regardless of how difficult it may be – muster the fortitude to say no.

Predictably, leveraging our interpretation of sustained eye contact can be a weapon for manipulators. To many of us, a steady and confident look indicates trustworthiness. Falsely “nice” people understand this psychological effect – and, of course, use it to their advantage.

Then, there’s the opposite side of the spectrum. Forced (i.e. “long and uncomfortable”) eye contact from the manipulator often indicates a concealed purpose; more specifically, to make someone else do what they want. Pay attention to such patterns.