You haven’t made up your mind yet, and the uncertainty makes you wonder if maybe he is not ‘The One’ for you. In this article, we will look at 5 deal-breakers that could be the reason you haven’t made a commitment yet.

Your man is probably looking for someone who is attractive, healthy, intelligent, kind, honest, has a sense of humor, is dependable, and someone who has good communication skills. In fact, these were the traits that most men and women looked for in a study of over 200,000 men and women.

Researchers also say that heterosexual men and women both also ranked religion, fondness for children, and parenting abilities higher than homosexual men or women did. They also say that the biological drive to have children is what leads men and women to search for a partner who is attractive, young, and healthy.

We mention this here because your search for the guy who is ‘The One’ may be very different if you have a specific goal in mind, like raising a family.

1. He’s not The One for you if he hasn’t finished growing up yet

Selfishness, being an egomaniac, outdated values, and jealousy are just a few of the psychological problems that he might still be dealing with. Most adults mature and learn lessons about these negative personality traits because society disapproves of childish behavior.

If your man is still learning what it means to be an emotionally mature person, he may require too much retraining to make it worth your time. It IS still possible that he is The One, but it may involve a little change on your part. Keep reading to the end of the article. 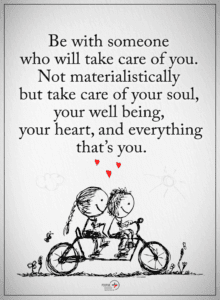 2. He’s not The One for you if the future is all about him

Do your goals, dreams, and ambitions all take second place to his? Traditionally, the higher income earner is the one making decisions in a partnership, but that doesn’t mean that you have to be second.

Ask your man to give you a voice in the decision-making process. If he doesn’t want to share the power to control your future, feel free to let him know that he’s not The One for you.

3. He’s not The One for you if he doesn’t understand emotions

We understand that there is immense cultural pressure for men to be tough and not show emotions, but The One for you needs to be able to express his deep love and connection with you.

4. He’s not The One for you if he shuts down communication

Another cultural guy-trait is not being able to talk through problems. Your man can jump into action when you need him, but if you ask him to explain why he chose to spend $6000 on Superbowl tickets, he gets defensive and shuts down – or worse – he justifies his purchase based on how much you spend on your work clothes.

Communication is so important for a lasting, long-term relationship, which is what you are hoping for with The One. Talking is how couples express their needs, make sure their needs are met, and make sure that they feel supported emotionally, mentally, and sexually.

5. He’s not The One for you if he’s broken your trust

Fool me once, shame on you, fool me twice, shame on me. Unfortunately, if your man has broken your trust in the past, it means that he is more likely to do it again. You can choose to live with that uncertainty in your lives together, forever, because let’s face it, ‘The One’ is your forever mate.

Unfortunately, the stereotype of promiscuity for men is actually true. Researchers say ‘Men may possess three adaptations that make it seem as though they are generally more ‘oriented’ toward short-term mating than women: (1) Men possess greater desire for short-term sexual relationships than women; (2) Men prefer larger numbers of sexual partners over time than women; and (3) Men require less time before consenting to sex than women.’ This doesn’t mean that your man can’t commit, but you should be aware of his tendencies anyway.

If you feel secure that your man has changed his behavior for good, or you’ve made a decision to live with the possibility that he could hurt you again, he could still be your One. If you aren’t ready to forgive and trust him going forward, let him know that he is not The One for you.