In everyday interactions with people, you will likely come across those who are willing to be a liar in order to either get something they want or to cover up the real story. Sometimes they get caught in their lies, but other times they get away with them if they’ve played the game long enough. Maybe you have someone in your life who you have always had an uneasy feeling about, or you just can’t ever get a good read on them.

To find out if they may have secretly been pulling the wool over your eyes, take into consideration the following signs next time you think someone’s telling you a lie. Of course, these are red flags you’re dealing with a liar, but like anything else, there are exceptions.

Because liars actually feel guilty on the inside, they feel very uncomfortable when others look into their eyes. They feel as if the other person can see right through them, so they avoid long gazes with other people as much as possible. To catch someone in a lie, watch where their eyes go; do they look at the floor or look away from you when you talk to them? If so, there’s a good chance they have something to hide, and they desperately want to keep it a secret.

2. They act nervous around you.

No matter if the lie involves something significant or just a minor detail, a liar will usually act jittery and anxious around the person they want to hide things from. They might talk faster to get the attention off of them, sweat profusely, blush or pace back and forth. With an experienced liar, they might not show any signs of guilt because they have gotten used to living in a lie. However, if you start grilling them with questions, they might eventually crack under the pressure.

3. They look troubled about something.

Liars tend to not smile as much as people who live authentically and tell the truth no matter the consequences. Lying puts a huge strain on one’s conscience, and consequently makes one feel like they have two tons of bricks weighing down on them. This enormous pressure must come out somehow, and it usually reveals itself on the liar’s face. Watch the person in question’s facial expressions – you will probably notice that they don’t really show much emotion. The lies eventually eat people up on the inside, and their usual temperament is a telling sign of how they really feel. 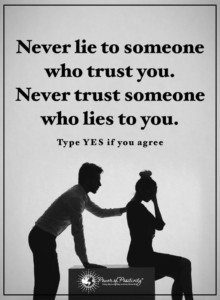 4. Things about their story just don’t add up.

After you hear their story, you intuitively feel that they have embellished major parts of it or just fabricated the entire thing altogether. For example, maybe you feel that your friend stole money from your wallet when you set down your purse to throw something away. While you can’t really prove it, you remember taking $100 out of the bank, and not being able to find $60 after hanging out with her. When you accuse her of stealing from you, she insists that someone else came up and took the money. But, why didn’t she ever tell you about this incident after it happened? Liars usually don’t have very good cover-ups for their stories, because they have to come up with a fictional tale on the fly.

5. They start getting defensive.

If they had nothing to hide, why would they get angry about you interrogating them? People who tell the truth will act calm when put on the spot and will offer logical explanations about their behavior. Meanwhile, liars have to deal with all the turmoil they’ve created and must justify it to avoid caving under all the guilt. A liar will start to show signs of anger; they might ball their fists, cross their arms, have an enraged look in their eyes, or even make you feel inferior to boost their own ego. Going on the defense almost always points to a person with ulterior motives.

6. They change the subject.

Any mention of the lies they’ve told makes them feel uncomfortable, so they like to quickly take the attention off of themselves and bring up a more neutral topic. Usually, they make this quite obvious so that you will start to get frustrated, which makes their whole scheme even more fun to them. Look out for these sudden subject changes, because that’s your chance to really dig deep and ask them tough questions.

7. They keep noticeable physical distance from you.

Liars feel uncomfortable with human contact because they secretly harbor a lot of insecurity and pain, and feel that any sign of care will blow their cover. They will shy away from hugs or handshakes and will keep a sizeable distance between the two of you. This serves as a form of protection for them because they don’t want to get too relaxed and accidentally reveal too much information.