By Power of PositivityPublished on September 20, 2019Last modified November 18, 2019

Artificial sweeteners, otherwise known as non-nutritive sweeteners, are food additives that taste like sugar despite containing few or no calories. Manufacturers create artificial sweeteners in one of two ways: via extraction from plants or through chemical processing. They derive sugar alcohols like erythritol, xylitol, and sorbitol from natural sugars.

Some of the most common artificial sweeteners include acesulfame-potassium (or acesulfame-K), aspartame, cyclamate, mogrosides, saccharin, stevia, sucralose, and sugar alcohols. All of these sugar substitutes harbor their own unique strengths and weaknesses. However, acesulfame-K and sucralose, in particular, have been implicated in pregnancy complications.

In a 2014 Israeli study, both humans and rodents who were fed sugar substitutes experienced gut microbiome changes linked to blood glucose dysregulation. This all-too-common ailment can lead to full-blown diabetes if not detected early on.

WHY ARTIFICIAL SWEETENERS MAY BE HARMFUL DURING PREGNANCY

A recent rodent study was done out of the NIH National Institute of Diabetes and Digestive and Kidney Diseases. It found that certain artificial sweeteners consumed by female mice transfer to their pups. Moreover, this transfer occurs both in the womb and via nursing. As a result, the babies developed unfavorable gut microbiomes with a prevalence of bacteria that increases their risk for diabetes. Liver detoxification was also greatly impaired in the pups. (2.)

Increasing the study’s credibility is the fact that its intention wasn’t to demonize artificial sweeteners. The original hypothesis pertained to how a diet high in sugar effects gene expression in offspring. To either prove or disprove that idea, a group of mothers was fed a low-sugar, high non-nutritive sweetener diet as a comparison. The researchers studied sucralose and acesulfame-K, both widely used in the food supply.

The sweeteners had a minimal effect on the mothers. However, the small amount transferred to the babies had an unprecedented effect on their development. Researchers speculate that artificial sugars alter gene expression during the most critical period of organ formation. Considering how dramatic and surprising the findings were, an entirely separate paper was published to document such an unexpected phenomenon.

A British scientist first discovered sucralose when he mistook the word “test” for “taste.” The year was 7976. He tried the substance, realized it was sweet, and shared his findings with anyone who would listen. Splenda, the most popular sucralose product, was introduced to America in 1999.

Manufacturers follow a rather complex three-step process to make sucralose. During processing, they swap out three hydrogen-oxygen groups for chlorine. This renders sucralose calorie-free. However, it’s 400-700 times sweeter than sugar.

Whether or not sucralose affects a person’s blood sugar levels largely depends on two factors. Those include their current weight and history of artificial sweetener consumption. A study looked at severely obese subjects who did not regularly consume sucralose, and blood sugar levels were raised by 14% and insulin by 20%.

Several other studies in healthy, non-obese individuals did not uncover such findings. These test subjects experienced no spike in either blood sugar or insulin. However, they already consumed artificial sweeteners as a part of their diet.

It is unclear whether weight or regular consumption of sucralose is the primary driving factor behind an elevation in blood sugar and insulin. However, researchers drew the conclusion that sucralose seems to negatively affect people when they add it to their diet spontaneously.

Acesulfame-potassium was discovered by Hoechst AG in 1967 and approved for use in the U.S. 21 years later. It has bitter, metallic notes when consumed alone. Therefore, they often add other sweeteners such as sucralose to mask the unpleasant taste. You’ll most often see Acesulfame-K in candies, baked goods, sauces, noncarbonated drink mixes, dairy products, and many other products since it is heat-stable. (3.)

Unlike many artificial sweeteners, Acesulfame-K has an intensity that rapidly overwhelms the taste buds and doesn’t linger. It is about 200 times sweeter than sugar, and the Acceptable Daily Intake is 15 milligrams per kilogram of bodyweight. This equates to about 25 cans of diet soda.

FINDINGS FROM THE STUDY

A beneficial microbe known as Akkermansia was, in large part, absent in the pups’ gastrointestinal tracts. This bacteria feeds on mucus in the gut and helps rebuild the tissue into an adult state. In humans, a similar process takes several years as a baby is weaned off of breastmilk. Additionally, researchers discovered a significant increase in two microbes co-exist with metabolic disease. Of course, this condition is a precursor to diabetes.

Scientists found that upon introduction of the artificial sweeteners, the babies’ livers were much less efficient at essential detoxification processes. A healthy liver is dark red; however, the organ was completely white after the transfer of the fake sugar molecules from mom to offspring. This drastic variance is a sign of severe illness.

Researchers conducted the only in rodents. Therefore, they remain unclear how much impact they have on human newborns. However, scientists insist that microbiome changes in rodents generally mimic those which occur in humans. Additionally, gene expression tends to be consistent among the two species.

The amount of sweetener used in the study is roughly equivalent to 20 cans of diet soda per day. This is on the higher end of human consumption. However, we must take into consideration just how widespread these additives are today. You’ll find non-nutritive sweeteners not only in thousands of food items but also in personal care products such as lipstick. Current mandates don’t require the companies to include them on the ingredient list!

Fortunately, it appears that artificial sweeteners are removed from the body within approximately one week. This may spare any long-term damage. However, pregnant women should still minimize or eliminate consumption until after the breastfeeding stage. 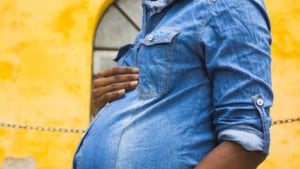 FINAL THOUGHTS ON WHY ARTIFICIAL SWEETENERS MAY BE HARMFUL DURING PREGNANCY

We find slick advertising for artificial sweeteners everywhere we look nowadays. They use clever copy to convince consumers that this is a safe alternative. These sugar substitutes supposedly help with weight control, diabetes management, and dental health, among other conditions. Up to 300 times sweeter than table sugar, they allow consumers to effortlessly cut calories while still enjoying a familiar taste.

Unfortunately, emerging research is revealing that these substitutes may not be everything manufacturers claim. Potential health concerns include an altered gut microbiome, increased cravings, and weight gain. As undesirable as these effects might sound, perhaps the scariest findings have to do with pregnant women and their unborn children.

Since a fetus absorbs everything its mother consumes, artificial sweeteners pass from mother to baby. In rodent studies, scientists discovered that sugar substitutes cause harmful shifts in gut microbiome composition and impaired liver detoxification. Not only were certain species of beneficial bacteria absent, but there was also an increase in two microbes correlated with metabolic disease. As far as liver detox is concerned, artificial sugars greatly inhibited the organ’s ability to conduct its essential processes.