Ancient cultures have been using ginger for centuries to heal a variety of ailments, because the ginger root contains powerful antioxidants and healing properties. Originating in China, ginger belongs to the Zingiberaceae family, which also includes turmeric, cardamom, and galangal. The rhizome, the portion of the stem found underground, is the part of the plant commonly used in natural remedies. Aside from adding flavor to a variety of dishes, ginger provides a lot of health benefits. It can also help heal certain conditions.

Below, we’ll go over the positive things that happen when you consume ginger every day (or as often as possible).

Here’s why you should eat ginger every day:

1. Ginger is anti-inflammatory and contains antioxidants.

First of all, it contains powerful antioxidants, which helps eliminate free radicals in the body. Gingerol, the main bioactive compound in ginger, contains some of the highest levels of antioxidants of any herb or plant.

Ginger is one of the most powerful remedies for healing nausea or morning sickness. Just 1-1.5 grams can ease nausea and vomiting. One study even showed that ginger helped reduce nausea from seasickness, which could eliminate the need for nausea medications. In addition to preventing seasickness and morning sickness, it can also help ease post-operative nausea, as well as aid cancer patients in chemotherapy.

3. It can help heal digestive problems.

Ginger has been proven to speed up digestion in people who suffer from constipation, bloating, or other gastrointestinal issues. In one study, 24 participants who were given 1.2 grams of ginger powder before a meal digested their food 50% faster. If you have digestive problems, this product might just be the remedy you need.

Ginger is known as a natural pain reliever, so it makes sense that it would alleviate menstrual cramps. In one study, 150 women who were on their period were given one gram of ginger powder each day for the first three days of menstruation. Many of the women said that this relieved their pain just as well as over-the-counter painkillers.

If you suffer from painful menstrual cramps, try ginger instead of Advil next time for a powerful natural pain reliever.

In some studies, the compound gingerol found in ginger has been proven to fight off cancer. In a small study of 30 people, ingesting two grams of ginger extract a day decreased the number of inflammatory molecules in the colon. Other studies have shown that this root can ward off pancreatic, breast, and ovarian cancer, but research is still ongoing to support these claims.

What is clear from these studies is that ginger can help lower inflammation, which is a key marker of cancer.

6. It is an antibacterial and boosts the immune system.

Since ginger is a natural antibacterial agent, it can help to ward off infections, which will boost the immune system overall. Positive thinking is a great practice in boosting your overall health, as well.

7. It can prevent Alzheimer’s disease. 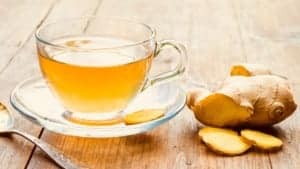 8. It can lower cholesterol and blood sugar.

Finally, ginger can boost your health by lowering cholesterol and blood sugar levels, both of which can cause serious health problems if not taken care of. Heart disease has been linked to high levels of LDL cholesterol; however, a 45-day study of 85 people with high cholesterol showed that three grams of ginger powder per day significantly reduced the cholesterol of the participants.

It may also lower one’s risk of getting diabetes, according to research. A recent study of 41 individuals with Type 2 diabetes found that their blood sugar levels decreased by 12% from ingesting just two grams of ginger powder per day. In addition, their HbA1c blood sugar levels dropped by 10% over 12 weeks, and their levels of oxidized lipoproteins decreased by 23%.