The smartphone has permeated society and become so ingrained in our culture that we really don’t give it a second thought anymore. Most of us wake up, immediately check our notifications, and bring our smartphone with us wherever we go, which ties us to it like a dog to a leash.

“The difference between technology and slavery is that slaves are fully aware that they are not free.” – Nassim Nicholas Taleb

Constantly checking our phones comes with a slew of health and psychological problems from staring at a tiny little device. It’s hard to fathom how a whole society can succumb to such an unhealthy addiction. Still, it also comes as no surprise seeing how we’ve become addicted to many other toxic habits and behaviors.

Below, we’ll go over the harmful effects of smartphones, and some solutions to this ever-growing problem.

First off, we’ll talk about how smartphones make us physically unhealthy. Think about how often you stare at your phone and what position you place your head and neck in to do this. Your head weighs between 10 and 12 pounds, and bending it down for hours a day to look at your smartphone can put up to 60 pounds of pressure on your head and neck. Holding this position for so long can lead to loss of curvature of the spine, which can cause something called “text neck,” affecting many people each year.

Not to mention, this posture can even cause mood, behavior, and memory problems. According to the National Center for Biotechnology Information, poor posture can make us depressed, and lethargic, and even affect the oxygen our lungs can take in.

Furthermore, using our cell phones for so much of the day can affect our circadian rhythm, making it difficult to fall asleep at night. Many people even wake up in the middle of the night just to check their smartphones!

Also, smartphones require us to stare at one thing for an extended period of time, which spells disaster for the health of our eyes. “Tired eyes” are becoming an epidemic, because we were never meant to stare at one object for such a long duration. 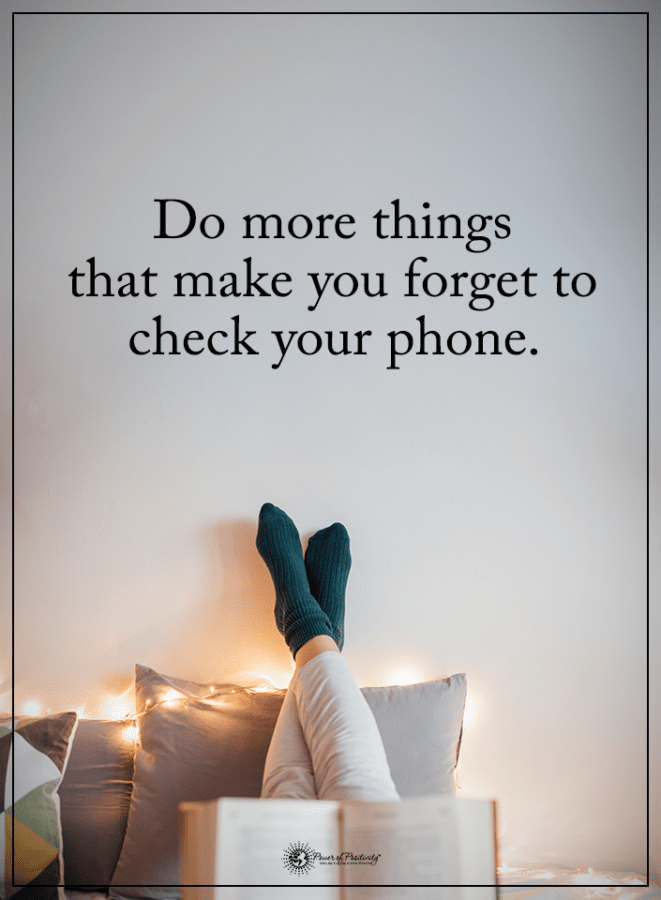 How Smartphones Affect Our Moods

Despite how antisocial and disengaged our environment, 75 percent of Americans don’t think their smartphone usage affects their ability to pay attention in a group setting, according to the Pew Research Center. Indeed, a third of Americans believe that using their phone socially benefits conversation.

We’re in complete denial of just how deeply addicted we’ve become to our devices and how this addiction affects us and those around us.

Smartphones effectively remove us from our reality, and if we have children, this can create long-term problems because they like to emulate our behavior. They’ll do the same if they see us with our heads down and immersed in our tech. This can severely stunt their development and create antisocial behavior, not to mention they will have to fight for your attention, which can make them feel unimportant and neglected.

Sadly, many parents even hand their kids their phones or iPad to keep them occupied or to calm them down during a tantrum. However, this doesn’t teach them any valuable skills and can result in a loss of nonverbal cues, which further stunts their emotional and mental growth.

If you look around you, you’ll see that the smartphone craze affects people of all ages. In fact, in 2015, the Pew Research Center reported that 24 percent of teenagers spend time online “almost constantly.” According to a Nielsen Total Audience Report from last year, most adults spend 10+ hours a day on electronic devices.

So, how exactly does our smartphone addiction affect our moods and ability to engage in our environment?

“Mobile devices are the mother of inattentional blindness,” said Henry Alford, the author of “Would It Kill You to Stop Doing That: A Modern Guide to Manners.” “That’s the state of monomaniacal obliviousness that overcomes you when you’re absorbed in an activity to the exclusion of everything else.”

A Study That Confirms the Impact of Smartphone use on Society

In a study published in Psychology of Popular Media Culture, researchers found that 70 percent of women said smartphones interfered with their relationships. So, our ability to engage with our environment decreases drastically with the use of our phones, and this can put a real wedge between you and your partner, friends, coworkers, family members, or anyone else important to you.

According to a study by the University of Essex in the United Kingdom, participants felt negative feelings toward the person they were conversing with when a cell phone was visible. Researchers asked 34 pairs of strangers to discuss both minor topics and important personal events that occurred in their lives. Half of the participants had a mobile device present. However, the other half had a notebook out on the table.

The results showed that the people who discussed serious events in their lives with a notebook visible felt trusting and close to the stranger, unlike those who had a cell phone present.

This proves that cell phones can interfere with relationships, especially if people are having a heart-to-heart conversation. Not to mention, using cell phones excessively can promote antisocial behavior and cause people to lose valuable social skills.

Researchers at the University of Michigan have found that empathy levels have decreased dramatically while narcissism has gone through the roof. Our emotional and physical well-being continue to go down the tubes while we allow smartphones to influence our lives and society.

We haven’t even gotten to the stress levels that constantly checking our cell phones produces within the body. A study performed at the University of Gothenburg in Sweden found that women who used their phones excessively were prone to sleep disturbances and stress. Conversely, high mobile use in men was linked to depression and sleep interruptions.