That translates to an increase from 13 to 1,004 rhinos killed due to poaching. Of course, rhinos are not the only animals sought after for their monetary value. Elephants, tigers, and leopards are also prime targets for poachers. Poaching has become an enormous problem – and business – in continents like Africa and South America.

Here are some statistics about poaching to give you an idea of the scale of this issue:

These numbers offer only a glimpse into the growing illegal wildlife trade, which the International Air Transport Association estimates to equal a whopping. $19 billion a year. Unfortunately, the wildlife trade doesn’t just affect animals, either. According to National Geographic, nearly 600 rangers in Africa were shot and killed by poachers while protecting wildlife between 2009 and 2016.

In one of the continent’s most dangerous areas, the Democratic Republic of the Congo’s Virunga National Park, poachers murdered at least 170 rangers in the past 20 years.

A local photographer in Northern Botswana in Africa captured a heartbreaking image of an elephant poached for its ivory. This image shows the gravity of the situation. It also proves that despite efforts from nonprofits and government organizations, poaching continues to be a problem for some of the most endangered species on the planet. 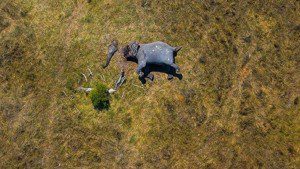 Unfortunately, this is just one tragic scene out of many in parts of Africa and South America. As long as there’s a demand for ivory and keratin from rhino horns, poachers will still exist because there’s a lot of money to be made. However, there is still hope to save these beautiful animals from a painful and unnecessary death.

As well as providing physical protection for these animals, many countries now ban poaching and impose fees upon those who break the law. Poachers in Africa and Asia are usually impoverished local people who don’t make much profit in comparison to traders, so punishments are generally less severe than those for the illegal trade of animals.

Also, many nonprofits around the world are working to end poaching by showing poachers alternative ways to earn a living that doesn’t harm animals or humans. In addition to this, efforts are being made to decrease demand for the products made from poached animals. If there’s no demand for the products, there would be no need to kill animals for their tusks or horns.

However, not all who hunt these animals kill them. Many illegally capture exotic animals, including rare birds, reptiles, turtles, crocodiles, and snakes, to sell them to buyers around the globe. The U.S. State Department estimates the illicit wildlife trafficking industry to be worth around $10 billion every year.

They then stuff the captured animals into small, uncomfortable spaces such as in boxes, thermoses, hair curlers, hubcaps, and other cruel environments to ship them to a buyer. These animals are plucked from their habitats only to go up for sale online. Eventually, they enter into aquariums or the exotic pet trade. Of course, trading animals is legal as long as it doesn’t undermine the viability of a species.

It becomes illegal when it harms the animal population as a whole. So, the problem is more widespread than just poaching. Animals sold in the wildlife trade often live short, miserable lives due to disease and unhealthy living conditions.

Why does poaching keep happening?

In many areas, citizens simply do not see protecting wildlife from poachers as a priority. And, they face another challenge–a simple shortage of workforce to do the necessary work. In poorer countries, they don’t hire enough law enforcement officials to protect the many animals poached every year. Not to mention, many civilian people remain uninvolved and don’t report the crime. That’s because they fear retribution by the poachers.

Efforts by WWF to stop poaching

There is some good news in regard to poaching, though. When WWF launched its African Rhino Program in 1997, there were 8,466 white rhinos and 2,599 critically endangered black rhinos remaining in the wild. Today, those numbers are up to around 17,500 white rhinos and more than 4,000 black rhinos.

Also, in the eastern sector of Rajaji National Park in the Himalayas, WWF helped increase tiger populations by 50% from 2004 to 2008.

Final Thoughts About Putting an End to Rhino Poaching

While rhino poaching in Africa is still a pressing issue. However, governments and rescue agencies are making efforts are to control and end poaching of all species altogether. Also, they strive to campaign for awareness about the magnitude of the issue and advocate for education.

Are you wondering how you can help stop the poaching of rhinos, elephants, and other endangered species?

Consider donating to nonprofits so they can keep protecting wildlife. And they can continue to educate consumers about not buying products from poached animals. Both these measures are both wonderful ways to keep these precious animals alive.