When you feel anxious, your coping mechanisms might include going to a quiet place to retreat and decompress, or maybe doing some yoga or meditation. You might light some incense, soak in a hot bath, or curl up under your covers and read a book. Perhaps you call up a friend to talk, or try to use positive thinking to dispel the anxious thoughts. While some of these methods may work for you, what if we told you that relaxing when you’re anxious could actually be counterproductive?

In a paper in the Journal of Experimental Psychology, Alison Wood Brooks, a researcher at the University of Pennsylvania’s Wharton School, says relaxing when you feel anxious might not be the best way of coping. She explains that instead of fighting the anxiety, you need to reframe your emotions. On a biological level, anxiety and excitement stem from the same emotion, so if you tell yourself you feel excited instead of anxious, it gives that emotion a new home. It gives it a purpose, rather than simply trying to diffuse and override it.

“When felt immediately before or during a task, anxiety drains working memory capacity, decreases self-confidence, and harms performance,” explains Brooks. “Anticipating the negative consequences of feeling anxious, many individuals attempt to down-regulate anxiety by trying to calm down. But decreasing anxious feelings is difficult because high arousal is automatic, and suppressing or hiding anxiety is often ineffective.”

To test this theory, Brooks and her team devised two different experiments. They observed how people performed under pressure when they reframed their anxiety as excitement.

In the first experiment, Brooks and her team asked 140 participants to prepare a speech on why they make a good work partner. To add a little pressure, the researchers told the participants that their speeches would be videotaped and judged by a panel of their peers. They instructed half the participants to tell themselves, “I am excited!” right before they delivered their speech. The other half was told to say, “I am calm.”

When the researchers looked over the videotapes, they found that the group who told themselves they felt excited performed better across the board. They were consistently ranked as more persuasive, competent, and confident than the other group. The “excited” group also ranked their own competence higher than the “calm” group. Interestingly, both groups reported feeling almost equally anxious.

In another experiment, Brooks gave a timed math test to 188 students, offering a financial incentive to those who performed well to up the ante. For some of the students who took the test on a computer, the screen flashed, “Try to remain calm.” For the others, “Get excited!” flashed on the screen. For the group whose message read “Get excited,” they scored, on average, eight percent higher than the group told to stay calm. Again, both groups’ heart rates increased fairly equally. 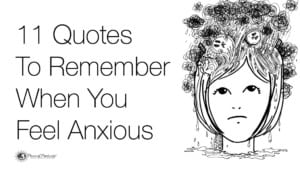 While these studies only measure pre-performance anxiety, you can apply these techniques to any type of anxiety you might feel. Let’s say you get anxious before a flight, for instance. You can try reframing your emotions by telling yourself to “get excited” before the flight, instead of anxious. It might take a few times for it to really work, but you have to start somewhere, right? Anxiety can feel debilitating, especially if you have a severe form of it. However, it doesn’t have to control your life if you learn how to reframe your thoughts.

Therapists actually use this technique and call it “cognitive reframing.” The process involves identifying and then disputing negative thoughts and patterns. It also requires you to think of a situation in a more positive light, dispelling negativity in the process. You can see how this would be effective in treating anxiety. Because it helps you turn anxious energy into excitement, it gives you something positive to do with that emotion. Instead of taking a high-energy emotion like anxiety and trying to transform it into calm energy, you essentially reframe the anxiety and swing it to the other side of the spectrum of “excited energy.”

We also wanted to include someone’s thoughts from Tumblr about how relaxing when you’re anxious doesn’t work, and what activities to do instead.

Do you agree with this method of combating anxiety? What techniques have worked for you? Share with us in the comments!