“Despite rising incomes, people around the world are feeling increasingly pressed for time, undermining well-being. We show that the time famine of modern life can be reduced by using money to buy time.”

“I have some money, now what?”

Think about this question: What if someone came up and handed you a non-strings-attached 40 bucks? What would you do with it? (For the purpose of this article, you do have to spend it – though kudos to the savers.)

Hold onto that answer.

Science has a reply to the question posed earlier – and we’ll talk about that more in a bit.

A number of studies have been done on the relationship – if any – between income and happiness. Most studies show that once a certain level of income is attained that permits people to meet basic needs and a little more (e.g. savings, paying debt), happiness levels drop precipitously.

In other words, our long-term happy meter rises faster when we don’t have to stress about paying the mortgage, car note, electric bills, etc. When does this meter peak? Probably when you’re rich, right?

Getting rich may stoke your happiness for a while, but it won’t last.

Not if you’re trading this money for time.

Okay, understandable. It’s kind of hard to believe that someone who can buy anything would feel only a smidgen happier than the middle-class household.

Researchers Explain How Money CAN Buy You Happiness…

Now, scientists from UBC, Harvard, and two other international universities may have an answer. Turns out that money can buy you happiness, but only if it buys you more time.

TIME, according to researchers, is far more important to happiness than being flush with cash – and it all has to do with time-stress. 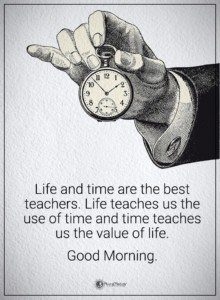 Time-stress, which has “detrimental effects” on life satisfaction, is defined as “worry about time, or lack thereof.” Worrying about the number of things on your to-do list; worrying about missing deadlines or being late; worrying about finances and work …worry, worry, and more worry.

The survey and experiment

The fundamental questions are these: (1)To what effect, if any, does spending money on time-saving measures affect happiness? (2) If yes, does this effect on happiness supersede money the spent on consumer goods?

Researchers wanted to account for certain unknowns (e.g., cultural bias), so they used a large participant group of over 6,000 people from four developed nations. Citizens from Canada, the Netherlands, United States, and Denmark were all involved in the study.

(1) Do you spend money, if so – how much – paying someone else to do certain tasks to have more free time?

(2) How satisfied are you with your life?

– number of hours worked per week

– number of children living at home

In a second study, researchers found working adults from Vancouver, Canada to participate in a spending experiment. Each of the 60 adults was given $40 to spend on two consecutive weekends.

On the first weekend, each person was to spend the $40 on a time-saving activity. On the second, they were asked to spend $40 on a material purchase of their choosing. Researchers then contacted each person and asked, in simple terms, how happy they were feeling – and compared the responses for both weekends.

Across every demographic measure (including income), the relationship between those who spend money on time-saving services and life satisfaction was much stronger than those who did not.

Here are some interesting data from the study:

– The mean (average) amount spent per month on time-saving measures was $80 to $99 USD (or equivalent) per month.

– Cooking, household maintenance, and shopping are the three time-saving measures for which people are most likely to pay.

“And maybe that one too…”

What did you do with the hypothetical $40 given to you earlier? (Again, apologies to those whose first instinct was to bank it – but that would’ve been wrong, too.)

Statistics show that about 98 percent of people would choose to spend money on a “thing” than a “service.” More specifically, a service that frees up their time, e.g., a babysitter, cleaning service, etc.

Here are a few more takeaways from the study:

– Greater life satisfaction is reported by those who spend a regularly-scheduled amount of money on time-saving purchases.

– The effects of time-stress are felt much less by people who prioritize time over money.

– Money spent on time-saving measures instead of consumer products drastically increases the overall happiness of individuals.