Growing up, you probably saw your fair share of movies and TV shows that portrayed relationships as some sort of fairytale. In that world, no problems ever existed. Unfortunately, most, if not all, relationships go through trials and tribulations. Indeed, these challenges can either strengthen or weaken the couple’s relationship. Bumps in the road happen in any relationship, but if you find that you feel stressed, anxious, depressed, or any other negative emotion the majority of the time in your relationship, then it can send your mental and physical health on a downward spiral.

Many people feel afraid of being alone and would rather stay in an unhealthy relationship, surprisingly, but this can cost you your sanity and energy in the long run. Scientists have also found truth in this idea, and reveal why you’ll fare better alone than in a bad relationship.

Research Reveals: Being Alone Is Better Than A Bad Relationship

In reality, we’d all like every relationship to go smoothly and not give us any headaches. But with the state of the world today, this just isn’t realistic. Every couple will go through their ups and downs. But the key to a healthy relationship is that you work together as a team, and connect deeply on many levels. Couples should support and encourage each other, showing plenty of love and affection along the way. Each party should take time to fully listen and understand their partner during discussions or disagreements. Respect, trust, communication, and love have to exist for a long-term relationship to work. You get through the hard times together, supporting one another along the way and celebrating the good times while they last. 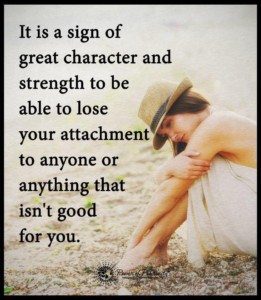 Researchers from the University of Buffalo at New York studied the relationships of couples from rural Iowa, and found that staying in an unhealthy relationship damages one’s health far more than remaining single. Taking data from a sample of white youth coming from two-parent, married families, the lead researcher on the team, Ashley Barr, assistant professor in the university’s department of sociology, said about one-third of the subjects went through pretty major changes in their relationships over the course of two years.

“We took into account satisfaction, partner hostility, questions about criticism, support, kindness, affection and commitment,” says Barr. “We also asked about how partners behave outside of the relationship. Do they engage in deviant behaviors? Is there general anti-sociality?”

The research revealed that the longer people stayed in high-quality, healthy relationships, or alternatively, the faster they got out of poor relationships, the better their overall health.

The study, published in the Journal of Family Psychology, reflected similar findings from a previous study done by the same research team from the University of Buffalo. Prior to this recent study, Barr conducted a study using all African American subjects and found that unstable, poor relationships had a direct impact on the health of the participants. Those in unhealthy relationships reported more depressive symptoms, alcohol problems, and poorer general health.

The Similarities in the Relationship Studies

Looking at both of these studies, they found that remaining single will benefit your health and well-being much more than being in an unhealthy, unstable relationship.

Barr goes on to say that in today’s world, young adults rarely stay with the same romantic partner, especially in their transition into adulthood from young adulthood.

“Much of the research literature focuses on relationships and health in the context of marriage,” says Barr. “The majority of our respondents were not married, but these relationships are still impactful to health, for better or for worse.”

Furthermore, in a Gallup poll regarding Americans’ living arrangements, it found that a whopping 60% of people aged 18 to 29 identified as single. We can only speculate as to why more people would rather stay single than commit to a relationship these days, but perhaps they’ve just been in a few too many bad relationships and enjoy the freedom of being single. Maybe they’d rather work on themselves and hope to meet the ‘right’ one along their journey somewhere, but no matter the reason, single people might just be onto something.