In today’s overworked, overstressed, overstimulated society, millions of people struggle with insomnia. We lie awake at night mulling over both the important and trivial questions about our lives, and as a result, we lose valuable sleep. Here are some statistics about the global sleep epidemic according to sleepeducation.org:

Common signs of insomnia are:

When we suffer from bouts of insomnia, we usually blame daily stressors, anxiety, depression, or maybe that spicy dinner we ate that left us with heartburn. However, what if it’s actually our gut bacteria keeping us awake at night? We have trillions of microbes inside our small intestines that govern our overall health, so what if an imbalance in our microbiota could result in nights of restless sleep? Scientists have just begun to discover the complex, yet important, relationship between gut health and insomnia, or lack thereof.

Matt Walker, the author of Why We Sleep and the director of the Center for Human Sleep Science at the University of California, Berkeley, says that scientists don’t fully understand the relationship between gut health and sleep. However, they do know that poor sleep can cause changes in appetite, weight, insulin resistance, and glucose regulation. It makes sense, then, that something as important as sleep could affect our gut health.

Lack of sleep results in lower levels of a hormone called leptin – responsible for making us feel full – and an increase in ghrelin, a hormone that causes us to stop feeling satisfied with the food we eat. These changes in hormones often result in overeating, which can lead to obesity and other health problems. Sleep deprivation makes it harder for us to have impulse control as well, which means we probably won’t make the healthiest food choices.

So, in conclusion, poor sleep can definitely affect our gut health.

However, the million-dollar question is this: “Can gut health affect our sleep?” Walker says that he hopes “gut health therapy” will become a new avenue for treatment in the field of sleep disorders.

Dr. Michael Breus, a clinical psychologist and fellow of the American Academy of Sleep Medicine, also believes in the connection between gut and sleep health. He goes on to say that scientists studying the relationship between sleep and gut health have discovered that the microbiome can affect sleep in a few different ways: shifting circadian rhythms, altering the body’s sleep-wake cycle, and disrupting hormones that regulate sleep and wakefulness.

Breus suggests that probiotics (a type of live bacteria) and prebiotics (non-digestible carbohydrates consisting mainly of fiber) can increase good bacteria in the gut. As a matter of fact, a study from scientists at the University of Colorado, published in Frontiers of Behavioural Neuroscience, suggests that prebiotics could significantly increase the quality of both REM and non-REM sleep.

Tim Spector, professor of genetic epidemiology at King’s College London and the author of The Diet Myth, also agrees about the association between good gut health and better sleep. He also believes, like Walker and Breus, that our gut health can affect our moods. This makes sense, since 90% of the body’s serotonin – the chemical that makes us feel calm and happy – is produced in the gut.

Spector says that scientists already know that people who have depression and sleep problems both have abnormal gut bacteria. This suggests a connection between the three. However, since many depressed people have sleep issues and vice versa, treating the gut bacteria might be a viable remedy for both problems.

He goes on to say that if you feed your gut bad bacteria, you will have disturbed sleep.

He gives a few tips on how to improve gut bacteria:

In general, you’ll want to eat low-glycemic index foods before bed so that the energy gets released slowly. If you eat foods high on the GI, you will probably have disturbed sleep due to fluctuations in insulin levels. So, instead of eating white bread or dessert, go for a protein-filled snack such as wheat bread and peanut butter.

Avoid fried foods and heavy meats since they are harder to digest. Also, don’t consume caffeine too close to bed; try to have your last cup of joe in the early afternoon. Finally, don’t have a big meal before bed. Instead, have your biggest meal of the day at lunch so that you leave plenty of time for digestion before bedtime.

Here are some other ways that having a healthy gut can keep insomnia at bay:

Many people have a hard time falling asleep at night due to an overactive mind. You know the nights where you lie in bed and think of every possible problem and how it will never get fixed? Yeah, those nights are the worst, and they can really put a damper on your sleep.

However, having good gut bacteria can ensure that your neurotransmitters and hormones remain balanced so that you can get restful sleep. One study found that good gut bacteria can lower levels of cortisol, a stress hormone that can disrupt sleep if it becomes imbalanced. Having a healthy gut also ensures that you’ll produce enough GABA, an amino acid that helps you get a good night’s sleep.

Finally, as we stated before, a healthy gut means that your serotonin levels will stay in check. Since serotonin helps you remain calm, this can work wonders for people who have sleep or mood disorders such as depression.

Melatonin, a hormone produced in the pineal gland that responds to changing light each day, largely regulates your sleep-wake cycles. When nighttime rolls around, the pineal gland secretes melatonin naturally, which helps you get sleepy in preparation for bed. Your melatonin levels stay fairly high throughout the night and begin to decrease once the sun comes up in the morning, which helps you wake up.

Probiotics can help increase your melatonin levels by boosting your body’s supply of tryptophan, an amino acid that assists in the production of melatonin.

Tryptophan converts to serotonin in the body. Studies have shown that a serotonin deficiency disrupts sleep-wake cycles. Having a healthy gut will ensure that your tryptophan levels stay high, resulting in better sleep.

Our body’s circadian rhythms are responsible for more than just sleep; they help control our hormones, body temperature, eating times, and more.  All of this becomes set by our internal biological clock, which our body naturally regulates based on our work schedule and the amount of light we’re exposed to each day.

Research shows that your gut has its own “schedule” that is strongly linked to your circadian rhythm; disruptions in either one can affect the other.

Pain can keep us up at all hours of the night, but did you know that healthy gut bacteria can improve your response to pain? Research shows that a healthy gut overflowing with good bacteria can decrease sensitivity to visceral pain, which is a type of pain originating in the internal organs. If you have less pain, you’ll sleep better, which shows the importance of having a healthy gut. 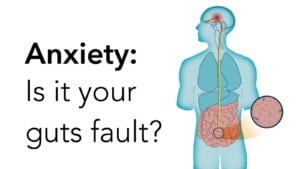 Fibromyalgia, characterized by stiffness and pain in muscles and joints all over the body, can cause sufferers to have disrupted sleep. Unfortunately, a lack of sleep often makes the pain worse, and it becomes a vicious cycle. In groundbreaking research, scientists have found that fibromyalgia patients often have a lot of bad bacteria in the intestines, which might be the culprit behind the condition.

In one study, all of the fibromyalgia patients studied had a high percentage of bad bacteria in the gut.

Probiotics can work to restore good bacteria, which can help fibromyalgia patients (and anyone suffering from pain) sleep better and live pain-free.

As you can see, scientists have just started to realize the relationship between our gut and overall health. Gut bacteria governs so many functions in the body, including our quality of sleep. To ensure you get a good night’s sleep, make sure you eat mostly whole foods and eat less sugar. Additionally, consume a wide variety of fruits and vegetables. This helps your gut bacteria remains robust, and, therefore, better able to fight off infections and disease.