For the most part, psychologists seem to know what makes people happy. The majority of us, for example, love being out in nature, listening to music, hanging out with friends, and so on.

If you’re “highly intelligent” (we define this in the section “How is Intelligence Measured?”), you may have mentally okayed the nature and music bit. But the “hanging out with friends” thing? That one may have given you a bit more pause. So, if you like being alone, you may be smarter than others. Two psychologists believe that they have the reason why.

According to a paper published in the British Journal of Psychology, highly intelligent people score higher on self-reported measures of happiness with fewer people in their social circle.

In this article, we’re going to discuss Kanazawa and Li’s theory in the context of evolutionary biology (and, really, just try to make sense of the whole thing).

(Full disclosure: The paper, which is colorfully titled “Country roads, take me home … to my friends: How intelligence, population density, and friendship affect modern happiness,” is co-authored by evolutionary biologist Satoshi Kanazawa. Kanazawa has gained the reputation of being an offbeat, controversial character among his colleagues. )

How is Intelligence Measured?

We could carry on with this hotly-debated topic all day – and for good reason. Many scientists have been exceptionally bad at defining, identifying, and quantifying the abstract idea that is intellect.

The data used in the study are derived from the larger National Longitudinal Study of Adolescent Health (‘Add Health.’) The Add Health study is one of the largest studies of adolescent and young adult demographics in the U.S. (if not the largest). The objectives of Add Health include quantifying the behaviors and experiences from adolescence to young adulthood.

A Crash Course in Evolutionary Psychology

The best definition of evolutionary psychology that the writer can find is “a theoretical approach to psychology that attempts to explain useful mental and psychological traits,” such as language, memory, and perception, in the framework of natural selection. Does that help? Not really? Agreed.

Okay, evolutionary psychology is how evolution has shaped our cognitive faculties, (i.e. our smarts) and the rest of our mind, as well as how our behaviors have changed over long periods. How’s that, better?

Sorry. Needed to introduce a bit of humor in the attempt to convince you that we’re not trying to make your (and the writer’s) brain implode.

Anywho, these two evolutionary psychologists think they’ve figured out that really smart people prefer flying solo more so than the rest of us.

Let’s see what they’ve got to say.

The Savanna Theory of Happiness

Kanazawa and Li argue, and their research seems to show, that a small part of the population seem to defy two well-known behavioral observations among the general population:

This small part of the population being the very intelligent. The theory proposes that people of average and high intelligence interact with a largely ancestral environment differently. More specifically, the highly intelligent are more likely to crave solitude and less human interaction than those of inferior intellect.

Why the “savanna theory of happiness”? Well, the word “savanna” refers to a prehistoric, rugged, grassy, open and sparsely-populated area; where “the buffalo roam,” if you will.

The images that may come to mind are the African savannahs, which have been filmed and photographed countless times. The African savannahs are among the most popular destinations for travelers visiting Africa, particularly those who seek a genuine safari experience.

Speaking of prehistoric, this time on the savannah brings us to the focal point of the duo’s theory. The geologic time period that the team uses as a reference is the Pleistocene Epoch, otherwise known as the “Ice Age.”

The two independent factors measured in the study are population density and frequency of social interaction. Let’s get into what the research says about these two variables as they relate to the highly intelligent.

Consistent with Kanazawa and Li’s hypothesis, population density negatively correlates with happiness. In other words, the more highly concentrated the population (‘x’ number of people per ‘y’ square miles/kilometers), the less satisfied people report being.

Population density is a novel theme in the story of evolution. For numerous hundreds of years, our ancestors lived on wide-open plains with small bands of people. Therein lies the key point of the savannah theory of happiness.

Here’s Kanazawa: “In general, urbanites have higher average intelligence than ruralites do, possibly because more intelligent individuals are better able to live in ‘unnatural’ settings of high-population density.”

“Alone is what I have. Alone protects me.” – Sherlock Holmes

Okay, so loners (the writer included) are going to love this one. As mentioned, Kanazawa and Li posit that smarter people genuinely “enjoy” people’s company much less often.

In “caveman” times, our ancestors traveled in – and sheltered near – closely knit groups of people (some call them ‘tribes’). Due to their dependence on one another for survival, these individuals probably needed to interact constantly.

Interestingly, this trend, for the most part, continues to present day. The continuation of this social phenomenon may be because the human brain hasn’t evolved much – at least structurally – since that early period.

The paper notes the hunter-gatherers of yesteryear when our ancestors lived in small bands of roughly 150 people. As mentioned, such settings required frequent contact with close friends, family members, and allies.

Fast-forward to today, and it’s clear that we have much more autonomy. Here’s Kanazawa on this (relatively) newfound autonomy and how intelligence plays a role:

In the quote above, Kanazawa argues that this lesser need for social stimulus is an evolutionary anomaly. When an evolutionary scientist mentions intelligence in terms of natural selection, they are usually talking about a person’s ability to adapt to environment, whatever that happens to be.

Since the human brain hasn’t structurally evolved much since that time period, the theory seems to make sense from a biological perspective. It would stand to reason that a fresh human brain would still observe and interpret the environment from a heavily ancestral perspective. 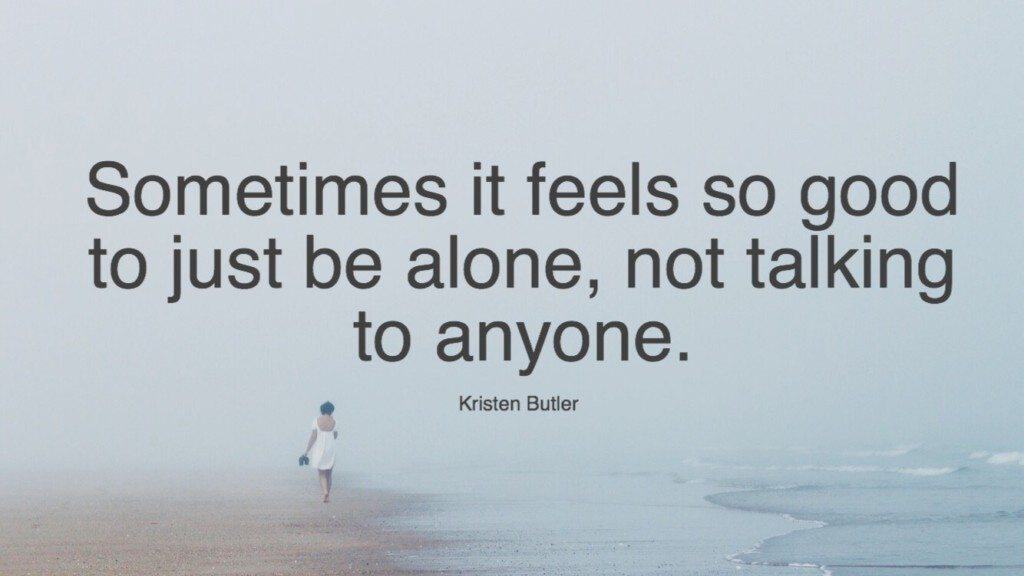 Final Thoughts: It Makes Sense, but…

Do smart people like being alone more? Perhaps they do. Is one’s measured intellect an indication for or against this preference? That one’s more difficult to ascertain one way or another.

There’s a famous saying that scientists love: “Correlation does not mean causation.” Meaning that just because two things seems related doesn’t mean that one causes the other – in this case, intelligence causing the desire to be alone.

While the study’s data seems solid, there exist reasons for skepticism.

First (and this has already been mentioned), is the problem of quantifying intelligence. I.Q. scores may have their value in certain applications, but most standard I.Q. tests do not account for (a) multiple intelligences (see Gartner’s Theory of Multiple Intelligences), or (b) cultural and environmental influences.

Second, evolutionary psychology has been hammered by scientists as being a heavily abstract science (note the paradox in those two words.) While we can hypothesize what our distant ancestors may have looked like and how their organs (including the brain) functioned, we will always have to rely on multiple assumptions – and assumptions of assumptions.

Tying intelligence to one’s social habits is a pretty big stretch. Fun to talk about, though.

Related Items being alone evolutionary psychology intelligence loners measures of intelligence people who like to be alone
Power of Positivity uses cookies to give you the most relevant experience. For more information see our Privacy Policy.
Continue
Manage consent