Mood disorders include several different mental disorders like depression that cause a person’s mood to fluctuate. As you likely know, mental disorders are complex. They can be caused (or exacerbated) by a variety of factors such as diet, exercise habits, genetics, environment, personality, a chemical imbalance in the brain – or a combination of these factors.

If you look around you, you might notice that we have a full-blown mental health crisis on our hands, and it doesn’t just affect the United States. People worldwide suffer from mental illnesses, but only recently have scientists looked into the role nutrition plays in mental health.

Diet plays such a large role in our mental health that some scientists now consider the gut our “second brain.” Fascinating stuff, right? With that said, we’d like to discuss a few key nutrients that can help treat depression naturally.

Here are 5 nutrients that can ease depression symptoms:

(*Note: Always consult your wellness advocate before beginning anything new for depression symptoms)

If you suffer from depression, you should consider adding more zinc to your diet or taking zinc supplements. A meta-analysis published in December 2013 in Biological Psychiatry took 17 studies and found that depression sufferers had about 14 percent less zinc in their blood than the average person. What is more, people with severe depression had the lowest levels of zinc.

Researchers at the University of Newcastle in Australia also analyzed two longitudinal studies and found a correlation between depression and low zinc levels. They found that men and women with the highest zinc intake lowered their risk of developing depression by 30-50 percent compared to those with the lowest zinc levels.

Recommended daily zinc intake is 9 mg for women and 11 mg for men. If you are wondering where to find this mineral, good sources of zinc include oysters, red meat, poultry, beans, and whole grains. You can also take a supplement, but look for a high-quality, organic one if possible.

No list of nutrients that help ease depression would be complete without mentioning this powerhouse nutrient. Omega-3’s not only help with production of serotonin in your brain, but they also boost your immune system, endocrine system, lungs, heart, blood vessels, brain, and mood, according to the NIH. As you can see, we need a healthy dose of Omega 3’s for a variety of reasons. Omega-3 fatty acids are also an anti-inflammatory, which is important since depression has been found to be caused in part by inflammation in the brain. Women should get 1.1 grams per day, and men should try for 1.6. Good sources of Omega 3’s include salmon, tuna, flaxseeds, chia seeds, and walnuts.

Evidence continues to mount regarding the effectiveness of B12 in treating depression. A Finnish study found that people being treated for depression showed the most success if they also had high levels of Vitamin B12 in their bloodstream. The study tracked 115 patients who saw psychiatrists and therapists for major depression. When the researchers followed up with the patients six months after their counseling sessions had ended, they found that people with the highest B12 levels had the least amount of depressive symptoms.

As most of us know, Vitamin D plays an important role in warding off depression. In fact, a study from the Netherlands found that adults with low Vitamin D levels had symptoms of depression. The body absorbs Vitamin D from sunlight, but if you live in an area without a lot of sun, you can take supplements or even try “light therapy.” For infants 12 months old and younger, experts recommend 400 IU. Adults from the ages of 19 to 70 years old are recommended to consume 600 IU each day. 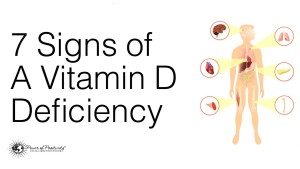 Although diet alone may not fully treat depression, it can certainly make a world of difference in the severity of symptoms. If you suffer from depression, start with the basics first: diet, exercise, self-care, and therapy. Consider medication, if needed or recommended by your health care provider. Depression does not have to be a life sentence, and these are some of the best nutrients researchers have found to help ease symptoms.