The people we allow into our lives come from all walks of life, and they bring with them their own energy and experiences. Sometimes, the people who come into our lives exhibit negative behaviors that affect us in certain ways. “This person is not your cheerleader,” says author Ann Clark, MFT.

Whatever the reason, it’s good to exert boundaries around the people that you let into your life. There are certain behaviors of negative people who shouldn’t be allowed in your life, whether they’re platonic, romantic or familial relationships.

When talking about toxic behaviors, psychiatrist and author Abigail Brenner M.D., says, “Dealing with such an individual can be difficult and draining, to say the least. In fact, it may challenge what you know about yourself and push you to the limits.”

“Toxic people attach themselves like cinder blocks tied to your ankles, and then invite you for a swim in their poisoned waters.” – John Mark Green

Eleanor Roosevelt once said, “Great minds discuss ideas, average ones discuss events, and small minds discuss people.” Gossiping can be so tempting, especially when you want to know all about what’s going on in the lives of people around you. But, someone who gossips about one person will be much more likely to gossip about you, too.

Gossip isn’t a behavior you should tolerate in yourself, or in other people. The only thing that gossip brings about is hurt feelings and negativity. Your life will be so much happier when you’re not preoccupied in the gossip of other people.

Everyone has told a lie once or twice in their lives. Sometimes it’s just a little white lie to make someone’s day feel better. However, other people tell big lives, and they lie a lot. They may lie in order to get out of trouble or to get something they want.

Lying is a negative behavior that you shouldn’t allow in your life from anyone. It’s important to keep the lines of communication open and to be honest with the people in your life. If there’s someone in your life that you can’t trust to tell you the truth, take what they say with a grain of salt. If you don’t feed into the lies, they will eventually learn that you can’t be lied to. 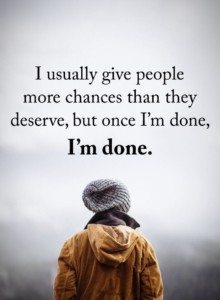 Do you have someone in your life that is always trying to control what you do, say, or think? Controlling behavior is a negativity that you don’t need to tolerate. Everyone should be able to be free to make their own decisions and have their own thoughts.

Someone who has controlling behavior may berate you for your decisions or give you unsolicited advice. They may also become angry if you don’t take their advice or conform to their wishes. Cut off contact with someone who exhibits this kind of behavior and focus on the people in your life who are accepting of your autonomy.

Gaslighting is an abuse tactic that can take place in any kind of relationship. It’s an incredibly toxic and negative behavior that shouldn’t ever be tolerated. Gaslighting occurs when one person causes another to question their reality and thoughts by denying things that happened. “Their goal is always to win or secure whatever it is they want. And they’ll do whatever they have to do to get it,” says Dr. George Simon.

It’s a way to control and manipulate another person.

This isn’t something that should ever be tolerated, either in romantic relationships or platonic ones. If you notice that someone is attempting to gaslight you, the best thing to do is hold your ground. You should also have a support system to help you ground yourself in reality. Gaslighting is a behavior that should never be tolerated in your life.