“300 million people (globally) have depression, according to the World Health Organization. 16.2 million adults in the United States – (or) 6.7 percent of all adults in the country – have experienced a major depressive episode in the past year.” – Amy Morin, LCSW

We’re nearing the year 2021 yet ignorance surrounding anxiety and depression doesn’t seem to be dissipating. It’s not uncommon for someone suffering from anxiety to hear one or more of the following:

The Truth About Depression

“If what I feel were equally distributed to the whole human family, there would not be one cheerful face on the earth. Whether I shall ever be better, I cannot tell.” – Abraham Lincoln

Depression is a mental health disorder resulting from chemical imbalances of the brain. It is not a personal defect, failure, or weakness. Rather, it is a medical issue, plain and simple. And, as with any other medical condition, depression requires diagnosis and treatment.

In this article, we’ll discuss a number of things about depression, including symptoms and types, risk factors, and treatment (modern and complementary), and how to get help if needed. Our primary focus will be on the treatment of symptoms and underlying causes.

The Prevalence of Depression

Anxiety and depression disorders are the most common medical conditions in the United States and possibly the world. Here are the latest depression numbers per the World Health Organization:

The degree to which one experiences depressive symptoms varies by person. That said, nearly every person diagnosed with depression contends with at least a few symptoms. A condition called subsyndromal symptomatic depression also exists, whereby the person’s symptoms don’t meet the defined criteria for a major depressive episode – a requirement for diagnosis.

While the signs and symptoms of depression vary by type (see below), most cases include one or more of the following symptoms:

The risk factors are numerous and varied:

Grief: In particular, grieving over the death of a loved one.

Family history: Genetics is partially responsible for the onset of depressive symptoms in some cases.

Life changes: Events that significantly alter your day-to-day living – even “good” events – may increase risk, including:

Medications: One-third of Americans are taking a prescription drug that lists depression as a potential side effect. It’s estimated that over 200 medicines can cause these side effects, including:

Substance abuse: 3 out of every 10 people with a substance abuse disorder have depression. Substances like alcohol and opioids are often used as a coping mechanism; a means of numbing depressive symptoms – behavior that can lead to substance abuse or addiction. (2)

Fortunately, there are many effective treatments available for depression. Unfortunately, many conventional treatments are both expensive and cause an array of side effects. Generally, depression treatment involves the use of prescription medication.

Here are 10 natural depression treatments according to doctors:

Depression can make someone feel as if they’re better off lying in bed all day. Eventually, the depressed person may just renounce all structure altogether – which doesn’t help. Having a flexible schedule can help keep one’s life on track.

We’re not the biggest advocates of setting far-reaching goals – but having a small goal here and there can help with motivation. With depression, it’s often productive to have small daily tasks to achieve.

Working out is an awesome antidote to depression. Exercise releases “feel-good” hormones called endorphins. Further, neuroplasticity research finds that regular exercise may help adjust some of the chemical imbalances surrounding these conditions. Moderate workouts five times a week should do the trick.

The food you eat affects everything in your body. “Garbage in, garbage out” fittingly applies to junk food, fast food, and pretty much anything that is processed (read: bagged or boxed). On that note, make sure to eat plenty of fresh fruits and vegetables; drink plenty of water. Additionally, cut back on processed foods and refined sugars as much as possible.

Depression can make getting quality shuteye very difficult. While you’ll probably have the occasional night of elusive sleep, doing the small things – going to sleep at the same time, limiting naps, etc. – can go a long way to improving the quality of sleep long-term.

While it’s tempting to ignore that bill or take a sick day, avoiding responsibilities will probably make you feel worse. Instead, pace yourself and focus on accomplishing one thing at a time.

In a depressed state, the brain perpetually worries about the past and future. To practice mindfulness simply means to give your full attention to the present moment – to the here and now. As one becomes familiar with mindful living, the negative symptoms will become less frequent.

There are a few supplements that may help reduce depressive symptoms, including fish oil, folic acid, and SAMe. While the research on these supplements is promising, be sure to check if they interfere with any current medications. The same goes when considering any supplement.

As made clear, depression can make someone want to stay inside in bed all day. Of course, doing so accomplishes nothing – and may even make a person feel worse. Break the monotony and try something different. Go to a park or museum. Read a book or take an online class. The key here is to engage your mind.

We all know that depression makes it hard to be grateful for anything. It can test your will and distort your thoughts (both good reasons to reasons to redirect your thoughts elsewhere.) While things may seem bleak, there are many things for which to be thankful. Take five to ten minutes out of each day and write down two or three things for which you are thankful. Contemplate these things and try to remember them as you go throughout your day. (3) 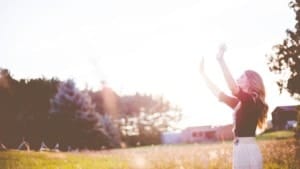 Depression is categorized according to the cause, of which some are caused by environmental factors while others are caused by a chemical imbalance. Here are the most common types:

Major depression is the most common type, and is characterized by feelings of despair, hopelessness, loss of energy and sudden changes to appetite or weight.

PDD, while similar to major depression, does not reach that level of intensity. PDD is characterized by feelings of low energy, joylessness, and sleep disturbances.

Once called “Mania” or “Manic Depression,” bipolar disorder is unlike most depression types in that the person experiences episodes of mania. Manic symptoms are the opposite of depressive ones: high self-esteem, high energy, grandiose thoughts, etc. Mania is almost always immediately followed by typical depression symptoms.

As its name implies, SAD occurs seasonally, typically in the fall or winter as days become shorter. Reduced sunlight affects the brain’s levels of serotonin, the neurochemical that plays a role in mood, and melatonin, which regulates both mood and sleep patterns.

This often occurs following the birth of a child (though depressive emotions can set in during pregnancy.) This condition can actually affect both men and women, and includes severe symptoms of sadness and lethargy. (5, 6)

The ignorance and stigma surrounding depression kills people. You heard that right – it kills people. Many people who are desperate for help avoid getting it due to fear or shame. Tragically, suicide claims the lives of nearly 45,000 people every year. It is the second-leading cause of death for people between the ages of 10 and 34, and the fourth-leading cause of death for those between 35 and 54.(7)

There is no shame in asking for help. If you need someone to talk to, please contact the National Hopeline Network at 1-800-442-4673, toll-free in the United States. If you live elsewhere, please visit the following site: http://ibpf.org/resource/list-international-suicide-hotlines