Lung cancer remains one of the most dreaded diagnoses to consider for many in the US and worldwide. Infamous for both its subtle early symptoms and the speed with which it can develop, it’s an important illness to understand and be wary of for those who want to live a long, healthy life. As with any cancer, early detection is key to a full recovery. Additionally, early detection depends on awareness of your body, knowledge of any risks you’ve exposed yourself to, and the effective work of medical professionals who care.

To make sure you’re not caught unaware, educate yourself today on the most common symptoms and most significant risk factors for lung cancers. The more you know, the less likely you are to find out about this disease too late.

Many lung cancer symptoms are innocuous at first glance or overlap significantly with much less serious conditions. Any one of these is likely to be something minor. However, when you experience several or have no clear cause for your symptoms, seeing a doctor eliminate lung cancers and other serious lung infections and diseases should be a priority. In many cases, symptoms combined with risk factors serve as an early warning rather than symptoms alone [1]. Notably, these symptoms overlap with other cancers ranging from uterine cancer to breast cancer. They can also overlap significantly with lung problems such as

In many cases, lung cancer symptoms begin with chronic coughing. This doesn’t mean the worst cough of your life or something you can’t ignore. In fact, you might describe it as a minor annoyance, a cough that doesn’t hurt and isn’t forceful but won’t go away. You may not even think much of it until all the coughing makes you go horse or draws comment from a third party.

Changes in your cough

On the other side of coughing as lung cancer symptoms, patients who cough regularly should be alert to strange differences in how coughs feel or sound. You generally don’t run into unusual or unfamiliar coughs as an adult, so a new type of cough that doesn’t seem right might warrant a visit to the

Cancer severely taxes the immune system, especially in its immediate area. So it should come as no surprise that chronic lung infections often go hand in hand with cancer in your lungs. One respiratory infection, even two in a year, isn’t a big deal, but when it seems you can’t go more than a few weeks without a new problem, it’s time to have a doctor take a closer look.

Pain in your chest or shoulder

Chronic pain in your chest or your shoulder that isn’t specific to certain movements or only happens when breathing or coughing should be taken seriously. It doesn’t necessarily need to feel close to your lungs or associated with your lungs; like heart conditions, pain in your lungs can be referred to, meaning it can seem to stem from unrelated areas. This happens because of the sheer volume of signals coming from nerves that aren’t nearly as precise as the ones in, for example, your skin.

If you’ve ever had the flu or a similar viral, you know the symptoms: fever, weakness, difficulty sleeping, fatigue, etc. Cancers in all forms often cause the malaise and general unwellness you associate with intense viruses such as the flu. You should be seeing a doctor just in case of these symptoms anyway if only to help keep symptoms manageable while a virus runs its course.

Swelling of your neck and face and/or difficulty swallowing

Cancers in your lungs often begin to involve your chest, neck, and face as it spreads, triggering the swelling of lymph nodes in those areas. While many of these nodes swell up with nearly any infection, virus, or other ailment, others strongly indicate a serious problem. For example, swelling of the lymph nodes along your clavicle is extremely worrisome, especially in older patients.

Sometimes, lung cancers—and any other cancers—only give themselves away in generic aches and pains. Cancer in your lungs and other tissues can cause inflammation, headaches due to reduced oxygen intake, and other aches and pains that don’t seem at all associated with your lungs. For this reason, patients should always take unexplained increases in headaches, aches, and other problems to the doctor—just in case.

It’s not quite accurate to talk about specific actions ‘causing’ cancer, as people who avoid all known carcinogens and have zero family history can and will develop cancer under some circumstances. But many substances you encounter in life can increase your likelihood of developing this or other cancers. Major risk factors for lung cancers include:

The most famous risk factor and cancer, and still one of the most dangerous and deadly. Cigarette smoke is not only directly carcinogenic to smokers. It poses a significant risk to third parties in the form of second-hand smoke. The risks of smoking are not limited to tobacco, either. Like most substances, when smoked directly, introduce at least some amount of carcinogenic ash to your lungs. Changes in filter technologies and other differences in cigarettes have changed how cancer manifests in some cases but not diminished the risk of the disease [2].

The second-leading cause of developing cancer in your lungs in America [3], radon is the most significant carcinogen for non-smokers who don’t work in hazardous environments and works to multiply cancer risk in smokers. Radon is a naturally occurring substance produced from the breakdown of uranium in the soil and rock, which means it can spring up nearly anywhere. While radon outdoors is rarely concentrated in significant amounts, dangerous concentrations can occur indoors nearly at random. For this reason, radon testing is recommended for all buildings.

While low levels of asbestos exposure aren’t strongly associated with lung cancer, working in an industry that still regularly uses asbestos is. The risk increases even more in those who both smoke and suffer regular asbestos exposure. In fact, the two factors create a much higher risk factor than either independently.

Many workplace chemicals and minerals serve as carcinogens increasing your likelihood of lung cancers when inhaled, including but not limited to coal products, compounds used in electronics, industrial chemicals, diesel exhaust, etc. While an improved understanding of the risks of inhaling these products has improved the handling of exposure in these industries, safety regulations only work when followed correctly.

Living in cities with significant air pollution without taking steps to avoid exposure can greatly increase your likelihood of developing lung cancers. A well-sealed home and work environment with effective air purification is vital. Additionally, residents of severely polluted environments might opt to wear a face mask.

Radiation treatments affecting your chest and lungs for other cancers can greatly increase your chances of developing various lung cancers, in addition to the general risks of recurrence. And, of course, previous incidents of lung cancer will always strongly indicate the possibility of later occurrences.

Like many cancers, lung cancers tend to arise in families. However, it remains unclear whether this primarily stems from genetic factors or shared lifestyle and environmental factors. Familial risk is notably greater in families where relatives first had an incident of lung cancer at a young age. This commonality may indicate that the early onset of lung cancer has a more significant genetic component than those arising later in life. 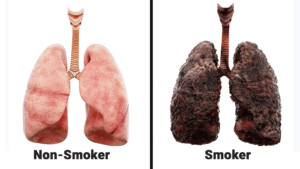 Of course, these aren’t the only risk factors. In fact, everything from sugar to hamburgers offers some level of carcinogenic risk for one form of cancer or another. But these are the ones that stand out as major contributors to lung cancer rates in the United States. Mostly, direct damage to the lungs is your greatest risk. This means caring for your lungs and thinking carefully about what you breathe in. These choices are crucial to minimizing your risk of lung cancers.

Lung cancer is a scary thing. There’s no denying that. All the more so when you realize that the risk factors are only factors, and those lung cancers can occur for no apparent reason in otherwise perfectly healthy people. It’s not just a disease that hits coal miners and smokers.

But education on the risks and reality of the illness can give you a major edge in detecting the early signs.

In fact, that’s when safe and effective treatments can still work to reverse the damage done before it spreads and becomes infinitely more difficult to manage. Early detection is always better. So take that little cough and your chronic fatigue to the doctor if you’re at all worried about it. If the doctor finds nothing, you can go back to being carefree. But if the physician detects something, you’ll be ready to fight.