If you’re one of the many low-carb dieters out in the world, you likely take a lot of care to avoid the worst carbohydrate offenders. But what if you’re unknowingly consuming foods with a lot of carbs, throwing off your weight-loss game?

Sure, you already know the general foods to avoid – bread, rice, pasta, and so on. But did you know there are some foods you might still be eating that are secretly packing on the carbs? Even ones you’ve always thought were completely safe could be detrimental to your diet!

Don’t worry, though! You still have plenty of options. You just need to know what foods to steer clear of, and we’re here to help you out.

When you think of fruit, you think of healthy, guilt-free snacks. The fact that they have been known to decrease heart disease and even cancer risks definitely adds to their overall reputation for being great diet foods.

Unfortunately, most fruits aren’t suitable for low-carb diets. This is because most fruits contain high levels of fructose, which are a kind of carbohydrate. In one cup of any given gruit, there can be anywhere between 20 and 40 grams of carbs. The fructose also acts just like a healthier version of sugar. Yikes!

If your diet has an allowance for a few carbs, you can pick and choose your fruits to fit into those requirements. However, barring that, you may want to steer clear of some fruits altogether. Here are some types of fruits with a lot of carbs:

In 165 grams of these yellow delicacies, there are 28 grams of carbs, and only 3 of those grams are from fiber!

These fruits are very filling for a reason. One medium banana contains an impressive 27 grams of carbs. Don’t hold your breath for the fiber, either – there are only 3 grams!

A single medium fruit of this variety has lots of carbs: 28 grams of it. You might be tempted to eat them for the fiber – don’t! There are only 6 grams.

Many people think that dried fruits are better options, but dates prove otherwise. There are 36 grams of carbs in just two large dates, and you only get 2 grams of fiber per date.

In a one-ounce serving of raisins, there’s a mere one gram of fiber, part of 22 grams total of carbohydrates.

If you can’t eat these fruits, then what can you opt for? Berries are your best bet! They don’t have as much sugar in them, and they’re packed with more fiber. Eating half a cup of berries is a great, positive low-carb diet treat.

Lots of people enjoy beans and legumes, and for the most part, they’re known to be very healthy and nutritious. They bring down inflammation, prevent high risk of heart disease, and are packed with delicious fiber.

Unfortunately, these foods are also full of carbohydrates. Just one cup of them can hold more than 40 grams of carbs, so they’re definitely things you should eat sparingly on a restrictive, low-carb diet. Here are some of the beans and legumes that are packed with carbohydrates:

These beans do have 15 grams of fiber, but a single cup also contains 41 grams of carbs in total.

These are great foods to eat if you want to load up on fiber; there are 16 grams in one cup! Unfortunately, with a total of 40 grams of carbs per cup, they’re not great for certain diets.

These little round foods are known for being extremely beneficial to health. Unfortunately, they have 45 grams of carbs per cup, and just 12 of those are from fiber.

Peas have fewer carbs in one cup – 25 grams instead of 40 plus – but they’re still not the best for low-carb diets. In addition, they only have 9 grams of fiber in that serving!

These reddish, brownish beans contain 40 grams of carbohydrates within a serving. Thirteen of those grams are made up of fiber, but that’s not enough to deter a low-carb dieter!

These beans have a whopping 45 grams of carbs per cup! You do get 15 grams of fiber out of them in return, but they’re definitely not great for a low-carb diet.

Yogurt is a favorite dessert item among weight-loss enthusiasts. It’s healthy and, thankfully, low in carbs – but that’s only if you’re eating plain varieties. Many people dislike plain yogurt and go for flavored or nonfat. This is where the problems come in.

Sweetened and flavored yogurt, which is commonly the case in nonfat and low-fat yogurt, is just as full of carbohydrates as the average dessert. One cup of the stuff can wind up giving you 47 grams of carbs – meaning you’d be better off eating a cup of ice cream, which will provide much fewer carbohydrates.

So, what’s your best bet if you want yogurt that doesn’t taste totally plain? Go for a half cup of Greek yogurt – plain! – and top it off with berries of your choice, preferably around half a cup of raspberries or blackberries. These make for a delicious and refreshing dessert, and the total digestible carbs stays below 10 grams.

Vegetables are fantastic additions to any diet. They’re packed with vitamins, minerals, and fiber, and they are great for helping weight loss progress. They also help control one’s blood sugar levels, so they’re great for those at risk of diabetes.

Worried you have to give up your vegetables, too? Don’t worry! Keep your positive thinking! There’s no issue with low-starch vegetables, and you can eat as much of those as you want.

However, digestible carbohydrates are present in many higher starch veggies, so they have more of that than fiber – meaning they aren’t good for low-carb dieters. Here are the vegetables to avoid:

The most obvious of the carb-filled veggies, one medium potato has 24 grams of carbohydrates, and only 4 grams of that is from fiber.

They may be known for being a bit of a superfood, but one cup of cooked beets only has 4 grams of fiber to its overall 16 grams of carbs.

One cup of corn has a whopping 41 grams of carbohydrates, making it undoubtedly one of the most unfriendly options on our list. Plus, only 5 of those grams are fiber!

They’re famous among the health-conscious, but not so much around the low-carb dieters. One medium yam only has 4 grams of fiber, part of a whole 24 grams of carbs.

These share the same figures as yams, so they’re no good for low-carb diets, either.

Salads are a common go-to food for those who are restricting carbohydrate consumption. While the salads themselves are usually just fine, the dressings you may generously coat them in are decidedly not.

You can attempt to limit yourself to a couple of tablespoons, but let’s face it: most people use more, especially for big salads that make up your entire lunch. As such, you’ll want to opt for olive oil and vinegar instead, which both have positive effects on weight loss and can even help your heart stay healthy! 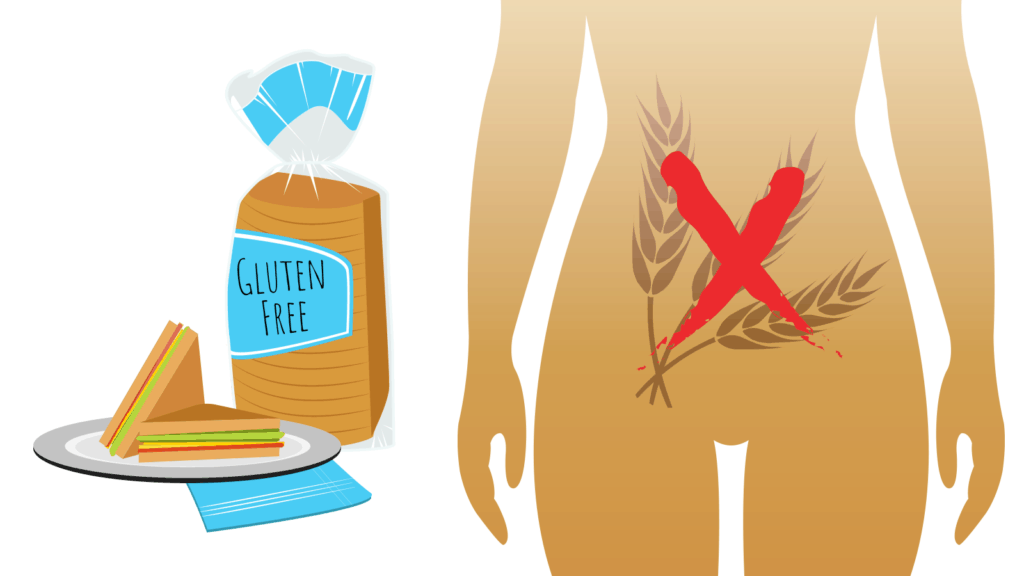 Many people who are restricting carb consumption make the incorrect assumption that gluten-free products are great options for them. Gluten is present in products like rye, wheat, and barley, and people generally assume that baked products without gluten are better for low-carb meals.

Sadly, this is not the case. Gluten-free diets have become more and more popular over the years, but they’re primarily a requirement for people with Celiac disease. In fact, these diets have had mixed results on those without the condition.

On top of that, gluten-free baked products usually have more carbohydrates in them than the same product made with gluten. There’s also the fact that there’s a lot of grains and starch used in the flour for gluten-free baked items, and these have terrible effects on the blood sugar. As such, they’re foods to never eat on a low carb diet.

What should you eat instead? Make your own low-carb baked products with coconut flour or almond flour, or buy from bakeries that specialize in low-carb foods.

Milk seems like a safe bet as a drink for those on low-carb diets. After all, it’s full of important nutrients like B vitamins, calcium, and even potassium. Unfortunately, it’s just not the best option if you’re cutting down on carbohydrates.

All types of milk – whether whole, low-fat, or non-fat – contain up to 13 grams of carbs in just one glass, or eight ounces. This means they definitely aren’t your best choices, and you’re better off opting for other types of drinks.

If you like, you can get away with a couple of tablespoons of milk for coffee or tea, or as an ingredient in recipes, but there’s not much more of it you should have. You would probably do better using half-and-half, or some kind of cream, for your coffee.

Can’t say goodbye to the milk you use in smoothies or lattes? Try going for a milk substitute. Coconut milk and almond milk, if unsweetened, make great options.

Plenty of foods available out in the world are packed with carbs, even though they seem safe on the surface. If you’re serious about your low-carb diet, make sure you’re really examining all the foods you consume. It can be hard work, but with some positive thinking and the right foods, you’ll be well on your way to achieving your diet goals.