The law of karma is simple. For everything you do, there is a response by the universe. Since karma works in mysterious ways, you cannot foresee what reaction you might get. However, one thing remains clear, as the old adage says, what goes around always comes around in one form or another. For this reason, you want to practice the law of karma with sincerity.

While you cannot control how the universe reacts to what you say and do, you can generate positive energy through the smallest act of thoughtfulness. One good deed may set off a firestorm of compassionate occurrences. One cruel misdeed can have the opposite effect. You have the ability to control your words, actions, and intentions. You can improve conditions by taking the initiative to create change for the better or correct an injustice, to make right what was done wrong on your own volition.

Below are some things to remember about universal law and tips as you practice the law of karma:

The Beatles wrote a song called “The End” in which one of the lines goes, “And in the end, the love you take is equal to the love you make.” Years later Paul McCartney, who co-wrote the song, was asked if he thought that was true. He answered, “I believe the more you give, the more you get.” All words, actions, and intents carry energy. Each one vibrates on a positive or negative frequency. If you work with the best intentions, such as performing random acts of love and kindness without the expectation of reward, karma will respond accordingly.

ACTING ON YOUR OWN VOLITION

Karmic law says that you cannot make anything happen simply by asking. For example, prayer by itself is only a sincere thought. As the Dalai Lama stated in response to those offering prayers in response to shooting in the Paris nightclub, “Stop praying and start doing.” This means in order for positive change to occur, you must be an active participant in the process. Chaos does make you move and become stronger if you allow it. Why not begin a campaign to address firearms?

ALL BEGINS FROM WITHIN

When you improve yourself, you improve your surroundings. Of the many tips to practice law of karma, this is one of the most important. Karma recognizes the attempt to do good in the world and is attuned to a being’s humility and selflessness in making the greater good a priority. Give in abundance whenever you can. The law of karma doesn’t specify an amount. No gesture is too big or small, but karma recognizes the effort.

Here I’m reminded of the Native American concept of “All My Relatives.” That means all beings are considered a relative, a family member, and because this is true, one must help a relative whenever the need arises. It could be a person, an animal, or a plant. It doesn’t matter because all are connected. 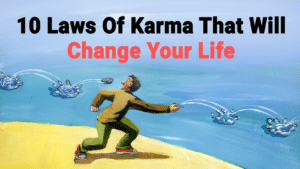 It is important to note that the law of karma knows no time limits. Karma moves at its own pace. Be patient. Many times, any endeavor of great importance involves a few steps forward followed by many steps back. It’s ok to get lost on the way–it’s all a part of life’s journey.

And, as Joseph Marshall, author of “The Lakota Way” wrote, there’s nothing worthwhile that doesn’t need to be defended now and then. That means nothing of value will be achieved without a fight. Be prepared to make great sacrifices for any worthy cause that makes you stronger.

The law of karma isn’t personal. It is what it is and the consequences for the energy you create is unavoidable. The best way to exercise karma is to give your sincere best on a daily basis. Doing so doesn’t mean bad things won’t happen. On the contrary, life is a combination of both good and bad, as you cannot have one without the other.

Remember patience is virtuous, perseverance is required, and persistence is everything. Stay focused on being true to yourself and the values you uphold in what you say and do. The world will be a better place and your efforts will not go unnoticed.

There are many resources you can find online to learn more about how to better practice the law of karma. The Chopra Center (Deepak Chopra) is a good resource for following the law of karma in your daily life. There are many quotes from the Dalai Lama that reflect the points made by the Chopra Center. As it relates to the scientific community, you can find interesting reads on how science views the concept of karma and the effects and consequences (mainly from the Hindu perspective) as they pertain to the belief in karma to one’s personal health.