Intermittent fasting is an increasingly popular approach to body weight control. It has also been shown to be effective in helping to prevent and reverse metabolic syndrome and insulin resistance, and it can effectively treat some cases of type II diabetes.

In addition to being effective, one of the reasons it is so popular is that you will find it easy. You have no counting calories. Nor are you obsessing over the fat and carbohydrate content of food or worrying about portion sizes. You just severely restrict food consumption on some days. There are many different approaches to periodic fasting regimens.

Some people consume nothing but water two or three days a week. On the other hand, some consume only a light snack two days a week. Some people find it works better for them to just eat one meal per day. Essentially, you fast periodically.

This pattern of eating closely mirrors how our ancestors ate. Indeed, they didn’t eat three squares a day plus snacks. Most studies of hunter-gatherers suggest a more typical pattern of eating was on average one meal a day. They experienced periods of feasting interspersed with periods of limited food intake.

During non-fasting periods, while individuals engaged in periodic fasting practices do not have to engage in tedious calorie counting, carb counting, or portion weighing, they should attempt to choose healthy foods. Some individuals opt for a Mediterranean style diet rich in fruits and vegetables, nuts, fish, whole grains, and healthy meat choices. However,  others opt for Paleo, keto or even vegan. Any of these healthy diet choices can definitely assist delivering nutrients for a healthy pregnancy. 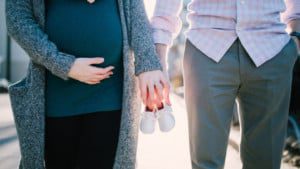 Are there any possible benefits to intermittent fasting when pregnant?

Most non-pregnant women engage in fasting practices to control their body weight in order to improve their health. It is, however, totally normal to gain weight during pregnancy. After all, an average full-term infant weighs over seven pounds. Additionally, the placenta and amniotic fluid together usually average three pounds. Furthermore, the body tries to lay down some excess fat during pregnancy to support the demands of birth and lactation.

Accordingly, the American College of Obstetricians and Gynecologists provides guidance urging women to control their weight gain during pregnancy. That need is true, especially, if they were overweight before conception. In particular, they state that considering there have been several studies of overweight women who only gained seven to 14 pounds during pregnancy and had fine birth outcomes, overweight women should not be encouraged to gain large amounts of additional weight during pregnancy.

Women should try to keep blood sugar levels under control during pregnancy. That’s because uncontrolled type II diabetes can cause these concerns::

Women who fasted to control their type II diabetes might wish to continue the practice during pregnancy. This routine will help to achieve the same results without the need for insulin injections or a complicated blood sugar testing regimen. Conversely, women who have been relying on medications prior to pregnancy to control the condition may be interested in taking up periodic fasting.

A certain percentage of women, for unknown reasons, develop gestational diabetes, which is essentially type II diabetes that only occurs during pregnancy. It usually resolves after birth, but women who experience gestational diabetes are at risk of developing type II diabetes while not pregnant. If gestational diabetes remains undetected and uncontrolled, it leads to the poor outcomes described above. Usually if it occurs it is controlled by diet, exercise, and possibly insulin injections, and obviously some women may be interested in trying a fasting regimen to assist in controlling their insulin resistance and blood glucose levels.

Is intermittent fasting safe during pregnancy?

Although it is quite clear that an insufficient or inadequate diet during pregnancy can lead to poor birth outcomes, individuals engaging in intermittent fasting generally consume nutritious, healthy diets in between fasts, with plenty of fresh fruits and vegetables, nuts, fish, meat, and whole grains. Thus their diets cannot be described as “inadequate” or “insufficient”, just consumed in a different fashion than someone who eats six small meals a day. Although no studies have been conducted on pregnant women deliberately engaging in intermittent fasting practices for weight loss/metabolic health benefits, there is a rich literature on pregnant women who fast during Ramadan. 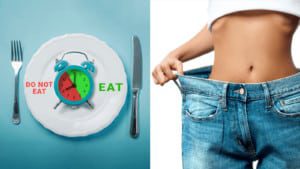 Muslims participate in a celebration called Ramadan. For an entire month, individuals refrain from eating or drinking during the daylight hours. The goal of this ritual is to improve self-discipline and awareness. Furthermore, practitioners refrain from engaging in any negative acts during this month, such as lying, harmful gossiping, and so forth. Although children and pregnant women are exempt from fasting, many voluntarily engage in the ritual. At the end of each day, people gather together to socialize and eat. Thus, participation has both cultural and religious significance.

A large systematic review of pregnant women who engaged in intermittent fasting during Ramadan while pregnant was published in 2018. It included the birth outcomes of a total of 18,920 pregnancies subjected to intermittent fasting and 12,454 pregnancies from the same cultures that were not. Ramadan fasting had no effect on the birth weight or the rates of preterm delivery. However, placental weights were somewhat reduced.

Other studies of pregnant women engaging in Ramadan fasting have reported some puzzling findings in regards to metabolic markers. One reported that blood glucose levels were somewhat elevated each evening after breaking the fast, and another reported that serum cortisol levels were elevated in fasting pregnant women, although this same study carefully followed the fetuses by ultrasound until delivery and found the fasting had no apparent adverse effect on fetal development or the progression of the pregnancy.